Three-torus model of the universe

The three-torus model is a cosmological model proposed in 1984 by Alexei Starobinsky and Yakov Borisovich Zel'dovich at the Landau Institute in Moscow. [1] The theory describes the shape of the universe (topology) as a three-dimensional torus.

Shape of the universe

Main articles: Shape of the universe and Illustris project 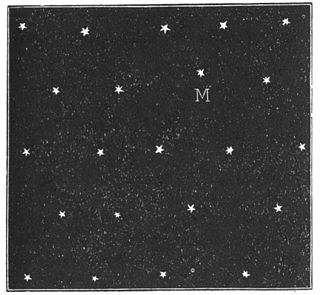 In physical cosmology, the Copernican principle states that humans, on the Earth or in the Solar System, are not privileged observers of the universe. Named for Copernican heliocentrism, it is a working assumption that arises from a modified cosmological extension of Copernicus's argument of a moving Earth.

The cosmic microwave background, in Big Bang cosmology, is electromagnetic radiation which is a remnant from an early stage of the universe, also known as "relic radiation". The CMB is faint cosmic background radiation filling all space. It is an important source of data on the early universe because it is the oldest electromagnetic radiation in the universe, dating to the epoch of recombination. With a traditional optical telescope, the space between stars and galaxies is completely dark. However, a sufficiently sensitive radio telescope shows a faint background noise, or glow, almost isotropic, that is not associated with any star, galaxy, or other object. This glow is strongest in the microwave region of the radio spectrum. The accidental discovery of the CMB in 1965 by American radio astronomers Arno Penzias and Robert Wilson was the culmination of work initiated in the 1940s, and earned the discoverers the 1978 Nobel Prize in Physics.

In modern physical cosmology, the cosmological principle is the notion that the spatial distribution of matter in the universe is homogeneous and isotropic when viewed on a large enough scale, since the forces are expected to act uniformly throughout the universe, and should, therefore, produce no observable irregularities in the large-scale structuring over the course of evolution of the matter field that was initially laid down by the Big Bang.

The Wilkinson Microwave Anisotropy Probe (WMAP), originally known as the Microwave Anisotropy Probe, was a NASA spacecraft operating from 2001 to 2010 which measured temperature differences across the sky in the cosmic microwave background (CMB) – the radiant heat remaining from the Big Bang. Headed by Professor Charles L. Bennett of Johns Hopkins University, the mission was developed in a joint partnership between the NASA Goddard Space Flight Center and Princeton University. The WMAP spacecraft was launched on 30 June 2001 from Florida. The WMAP mission succeeded the COBE space mission and was the second medium-class (MIDEX) spacecraft in the NASA Explorer program. In 2003, MAP was renamed WMAP in honor of cosmologist David Todd Wilkinson (1935–2002), who had been a member of the mission's science team. After nine years of operations, WMAP was switched off in 2010, following the launch of the more advanced Planck spacecraft by European Space Agency (ESA) in 2009.

The discovery of cosmic microwave background radiation constitutes a major development in modern physical cosmology. In 1964, US physicist Arno Allan Penzias and radio-astronomer Robert Woodrow Wilson discovered the CMB, estimating its temperature as 3.5 K, as they experimented with the Holmdel Horn Antenna. The new measurements were accepted as important evidence for a hot early Universe and as evidence against the rival steady state theory as theoretical work around 1950 showed the need for a CMB for consistency with the simplest relativistic universe models. In 1978, Penzias and Wilson were awarded the Nobel Prize for Physics for their joint measurement. There had been a prior measurement of the cosmic background radiation (CMB) by Andrew McKellar in 1941 at an effective temperature of 2.3 K using CN stellar absorption lines observed by W. S. Adams. Although no reference to the CMB is made by McKellar, it was not until much later after the Penzias and Wilson measurements that the significance of this measurement was understood.

In physical cosmology, the age of the universe is the time elapsed since the Big Bang. Today, astronomers have derived two different measurements of the age of the universe: a measurement based on direct observations of an early state of the universe, which indicate an age of 13.787±0.020 billion years as interpreted with the Lambda-CDM concordance model as of 2018; and a measurement based on the observations of the local, modern universe, which suggest a younger age. The uncertainty of the first kind of measurement has been narrowed down to 20 million years, based on a number of studies which all gave extremely similar figures for the age. These include studies of the microwave background radiation by the Planck spacecraft, the Wilkinson Microwave Anisotropy Probe and other space probes. Measurements of the cosmic background radiation give the cooling time of the universe since the Big Bang, and measurements of the expansion rate of the universe can be used to calculate its approximate age by extrapolating backwards in time. The range of the estimate is also within the range of the estimate for the oldest observed star in the universe.

In physical cosmology, structure formation is the formation of galaxies, galaxy clusters and larger structures from small early density fluctuations. The universe, as is now known from observations of the cosmic microwave background radiation, began in a hot, dense, nearly uniform state approximately 13.8 billion years ago. However, looking at the night sky today, structures on all scales can be seen, from stars and planets to galaxies. On even larger scales, galaxy clusters and sheet-like structures of galaxies are separated by enormous voids containing few galaxies. Structure formation attempts to model how these structures formed by gravitational instability of small early ripples in spacetime density.

The history of the Big Bang theory began with the Big Bang's development from observations and theoretical considerations. Much of the theoretical work in cosmology now involves extensions and refinements to the basic Big Bang model. The theory itself was originally formalised by Belgian Catholic priest, theoretical physicist, mathematician, astronomer, and professor of physics Georges Lemaître.

The Degree Angular Scale Interferometer (DASI) was a telescope installed at the U.S. National Science Foundation's Amundsen–Scott South Pole Station in Antarctica. It was a 13-element interferometer operating between 26 and 36 GHz in ten bands. The instrument is similar in design to the Cosmic Background Imager (CBI) and the Very Small Array (VSA). In 2001 The DASI team announced the most detailed measurements of the temperature, or power spectrum of the Cosmic microwave background (CMB). These results contained the first detection of the 2nd and 3rd acoustic peaks in the CMB, which were important evidence for inflation theory. This announcement was done in conjunction with the BOOMERanG and MAXIMA experiment. In 2002 the team reported the first detection of polarization anisotropies in the CMB.

The CMB Cold Spot or WMAP Cold Spot is a region of the sky seen in microwaves that has been found to be unusually large and cold relative to the expected properties of the cosmic microwave background radiation (CMBR). The "Cold Spot" is approximately 70 µK colder than the average CMB temperature, whereas the root mean square of typical temperature variations is only 18 µK. At some points, the "cold spot" is 140 µK colder than the average CMB temperature.

The Delta 5000 series was an American expendable launch system which was used to conduct an orbital launch in 1989. It was a member of the Delta family of rockets. Although several variants were put forward, only the Delta 5920 was launched. The designation used a four digit numerical code to store information on the configuration of the rocket. It was built from a combination of spare parts left over from earlier Delta rockets, which were being retired, and parts from the Delta II 6000-series, which was just entering service.

Conformal cyclic cosmology (CCC) is a cosmological model in the framework of general relativity, advanced by the theoretical physicist Roger Penrose. In CCC, the universe iterates through infinite cycles, with the future timelike infinity of each previous iteration being identified with the Big Bang singularity of the next. Penrose popularized this theory in his 2010 book Cycles of Time: An Extraordinary New View of the Universe. 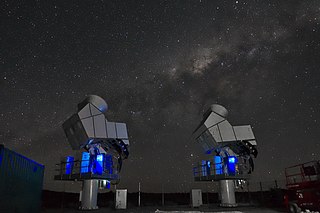 Joanna Dunkley is a British astrophysicist and Professor of Physics at Princeton University. She works on the origin of the Universe and the Cosmic microwave background (CMB) using the Atacama Cosmology Telescope, the Simons Observatory and the Large Synoptic Survey Telescope (LSST).