Three is a Telugu film, starring Rajiv Kanakala, Richard Rishi, Santhi Chandra, Urvashi Sharma and others, directed by Shekhar Suri. It was produced by G S Babu and P Phani Raj, cinematography by Samalabhasker and K. K. Senthil Kumar with music composed by Vijay Kuraakuala,. The film was released on 13 June 2008.

Nisha (Urvashi Sharma) is haunted by bizarre sounds and a voice that keeps warning that would kill her. Terrified Nisha seeks help from her neighbor SriRam (Richard Rishi) who is a photojournalist with National Geographic Channel. He takes her to a psychiatrist (Harshavardhan) and diagnosis reveals that Nisha's condition is normal. However, docs come to conclusion that she might be suffering from schizophrenia. On the other hand, Nisha reveals that the voice she keeps listening is similar to that of Shankar whom she met on a trip to an island. Now, Nisha, Sriram and the psychiatrist set for finding Shankar in an island forest. After settling in a hotel in the jungle, they meet an eccentric person named Rajeev (Rajeev Kanakala). The rest of the drama is unraveling the suspense of how Nisha is connected with Rajeev, Shankar and others. 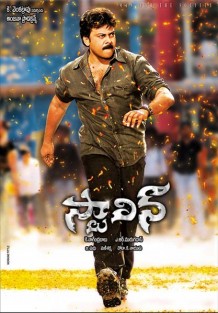 Stalin is a 2006 Indian Telugu-language action drama film directed by A. R. Murugadoss. It stars Chiranjeevi and Trisha in the lead roles, while an ensemble cast including Prakash Raj, Sharada, Khushbu Sundar, Pradeep Rawat, and Brahmanandam in supporting roles. The film was a super hit at the box office. The film was screened at the International Film Festival of India in the mainstream section. The film was later dubbed in Hindi under the same name.

Ratchagan is a 1997 Indian Tamil-language action romance film written, produced by K. T. Kunjumon, and directed by Praveen Gandhi. It stars Nagarjuna and Sushmita Sen in the lead roles, alongside Raghuvaran, S. P. Balasubrahmanyam, Vadivelu and Girish Karnad in supporting roles. It was the most expensive Indian film at the time of release. This film marks the Tamil debut of Nagarjuna.

Kyaa Kool Hain Hum is a 2005 Indian Hindi black comedy film directed by Sangeeth Sivan and produced by Ekta Kapoor. It features Tusshar Kapoor and Ritesh Deshmukh in lead roles. The film was released on 6 May 2005 and managed to succeed at the box office, despite receiving a negative critical response. It was one of the first Bollywood films to feature adult comedy. It is the first installment of Kyaa Kool Hain Hum film series. The film spawned two sequels, Kyaa Super Kool Hai Hum and Kyaa Kool Hain Hum 3. 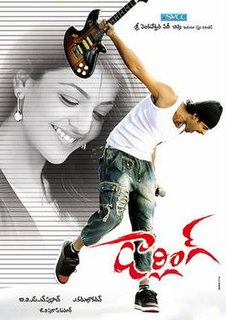 Darling is a 2010 Indian Telugu-language romantic comedy film directed by A. Karunakaran. The film stars Prabhas and Kajal Aggarwal in the lead roles, while Prabhu, Shraddha Das, Ahuti Prasad, Chandra Mohan, and M. S. Narayana playing supporting roles. The music is composed by G. V. Prakash Kumar. The film was released on 23 April 2010. The film was a blockbuster at the box-office. It was later dubbed in Hindi under the title Sabse Badhkar Hum by Goldmines Telefilms in 2013. 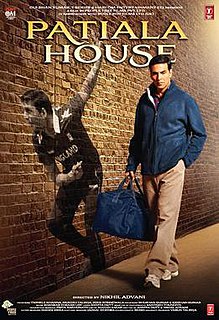 Patiala House is a 2011 Indian Hindi-language sports drama film directed by Nikkhil Advani and starring Rishi Kapoor, Dimple Kapadia, Akshay Kumar and Anushka Sharma in the lead roles. It was produced by Bhushan Kumar, Mukesh Talreja, Krishan Kumar and Twinkle Khanna under the banner of People Tree Films, Credence Motion Pictures and Hari Om Entertainment. The film released on 11 February 2011. The theatrical trailer of the film was premièred with Farah Khan's Tees Maar Khan on 24 December 2010. Akshay Kumar plays the role of a fast bowler, loosely based upon Monty Panesar and its concept was conceived by Rahul Nanda, son of writer Gulshan Nanda.

Suma Kanakala earlier known as 'Paachavital Suma' is an Indian TV anchor, host, singer, actress, and producer. She is best known for starring in Star Mahila, a game show, which is the longest running game show in India. 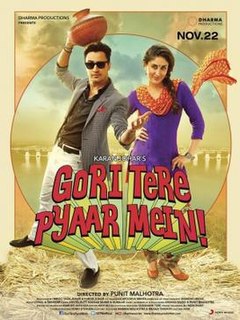 A Film by Aravind is 2005 Indian Telugu language mystery thriller film produced by Maroju Sridhar Rao, Sridhar Cinema and directed by Sekhar Suri. The story is that a director and an actor who fall in love with a mysterious woman. This film was remade in Kannada as Nima Shankarnag. It was followed by Aravind 2. The film was dubbed into Hindi as Bhayanak: A Murder Mystery in 2011. 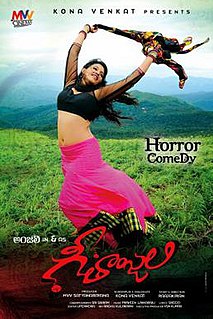 Geethanjali is a 2014 Indian Telugu comedy horror film written and Presented by Kona Venkat and directed by debutant Raj Kiran featuring Srinivasa Reddy and Anjali in the lead roles. The film's soundtrack and background score were composed by Praveen Lakkaraju. The movie was remade in Kannada as Kathe Chitrakathe Nirdeshana Puttanna.

Manamantha is a 2016 Indian Telugu-language anthology film written and directed by Chandra Sekhar Yeleti and produced by Sai Korrapati. It stars Mohanlal, Gautami, Viswant Duddumpudi, and Raina Rao and also marks the former's Telugu debut after a guest appearance in the 1994 film Gandeevam. The music was composed by Mahesh Shankar with cinematography by Rahul Shrivatsav and editing by G. V. Chandra Sekhar. The film released on 4 August 2016.

Saithan is a 2016 Indian Tamil-language action thriller film written and directed by Pradeep Krishnamoorthy. The film features Vijay Antony and Arundhati Nair in the lead roles, with Charuhasan, Y. G. Mahendra, Siddhartha Shankar and Kitty amongst others forming the secondary cast. The film revolves around a software engineer who gets into trouble after he starts hearing strange voices asking him to kill a woman named Jayalakshmi.

118 is a 2019 Indian Telugu-language action thriller film written and directed by cinematographer turned film director K. V. Guhan in his Tollywood directorial debut. The film features Kalyan Ram, Shalini Pandey and Nivetha Thomas in the lead roles. The music for the film is composed by Shekar Chandra and the film is produced by Mahesh S Koneru under the production company East Coast Production. The film follows an investigative journalist who finds himself threatened after he tries to decode a recurring nightmare involving a woman's death. 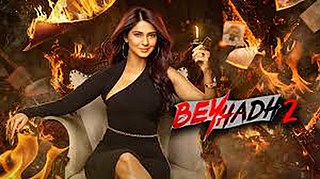