Three Friends is a South Korean drama/sitcom. It was first broadcast on MBC (Korean language version only). It ran from February 14, 2000 to April 16, 2001, airing 58 episodes. 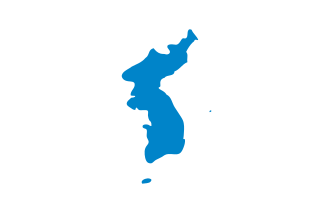 Korea is a region in East Asia; since 1945 it has been divided into what are now two distinct sovereign states: North Korea and South Korea. Korea consists of the Korean Peninsula, Jeju Island, and several minor islands near the peninsula. It is bordered by China to the northwest and Russia to the northeast. It is separated from Japan to the east by the Korea Strait and the Sea of Japan. 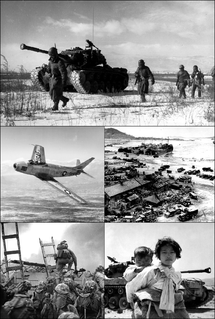 North Korea, officially the Democratic People's Republic of Korea, is a country in East Asia constituting the northern part of the Korean Peninsula. The country is bordered to the north by China and by Russia along the Amnok and Tumen rivers, and to the south by South Korea, with the heavily fortified Korean Demilitarized Zone (DMZ) separating the two. North Korea, like its southern counterpart, claims to be the legitimate government of the entire peninsula and adjacent islands. Pyongyang is the country's capital and largest city.

South Korea, officially the Republic of Korea is a country in East Asia, constituting the southern part of the Korean Peninsula and sharing a land border with North Korea. 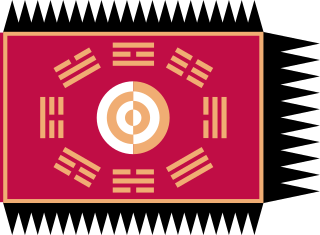 K-pop is a genre of popular music originating in South Korea. While the modern form of K-pop can be traced back to the early 90s, the term itself has been popularized since the 2000s, replacing the term Gayo (가요), which also refers to domestic pop music in South Korea. Although it generally indicates "popular music" within South Korea, the term is often used in a narrower sense to describe a modern form of South Korean pop that is influenced by styles and genres from around the world, such as experimental, rock, jazz, gospel, hip hop, R&B, reggae, electronic dance, folk, country, and classical on top of its traditional Korean music roots. The more modern form of the genre emerged with the formation of one of the earliest K-pop groups, Seo Taiji and Boys, in 1992. Their experimentation with different styles and genres of music and integration of foreign musical elements helped reshape and modernize South Korea's contemporary music scene. 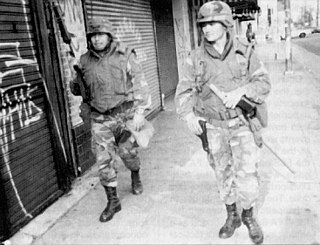 The 1992 Los Angeles riots were a series of riots and civil disturbances that occurred in Los Angeles County in April and May 1992. Unrest began in South Central Los Angeles on April 29, after a trial jury acquitted four officers of the Los Angeles Police Department (LAPD) for usage of excessive force in the arrest and beating of Rodney King, which had been videotaped and widely viewed in TV broadcasts.

Korean dramas, more popularly known as K-dramas, are television series in the Korean language, made in South Korea. 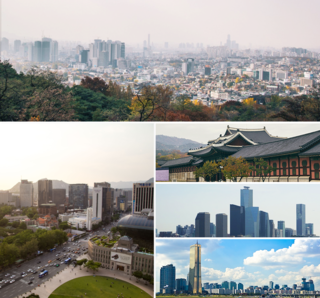 Seoul, officially the Seoul Special City, is the capital and largest metropolis of South Korea. Seoul has a population of 9.7 million people, and forms the heart of the Seoul Capital Area with the surrounding Incheon metropolis and Gyeonggi province. Ranked as an alpha world city, Seoul was the world's 4th largest metropolitan economy with a GDP of US$635 billion in 2014 after Tokyo, New York City and Los Angeles. International visitors generally reach Seoul via AREX from the Incheon International Airport, notable for having been rated the best airport for nine consecutive years (2005–2013) by the Airports Council International. In 2015, it was rated Asia's most livable city with the second highest quality of life globally by Arcadis, with the GDP per capita (PPP) in Seoul being around $40,000. In 2017, the cost of living in Seoul was ranked 6th globally. In 2018, Seoul's real estate market was ranked 5th in the world for the price of apartments in the downtown center. Seoul was one of the host cities for the official tournament of the 2002 FIFA World Cup, which was co-hosted by South Korea and Japan.

Kim Il-sung was the founder and first Supreme Leader of North Korea, which he ruled from the country's establishment in 1948 until his death in 1994. He held the posts of Premier from 1948 to 1972 and President from 1972 to 1994. He was also the leader of the Workers' Party of Korea (WPK) from 1949 to 1994. Coming to power after the end of Japanese rule in 1945, he authorized the invasion of South Korea in 1950, triggering an intervention in defense of South Korea by the United Nations led by the United States. Following the military stalemate in the Korean War, a ceasefire was signed on 27 July 1953. He was the third longest-serving non-royal head of state/government in the 20th century, in office for more than 45 years.

Lee Ji-eun, known professionally as IU (Korean: 아이유), is a South Korean singer-songwriter and actress. She signed with Kakao M in 2007 as a trainee and debuted as a singer at the age of fifteen with her album, Lost and Found. Although her follow-up albums, Growing Up and IU...IM, brought mainstream success, it was after the release of "Good Day", the lead single from her 2010 album Real, that she achieved national stardom. "Good Day" went on to spend five consecutive weeks at the top position of South Korea's Gaon Digital Chart, and in 2019 it was ranked number one on Billboard magazine's 100 Greatest K-Pop Songs of the 2010s. 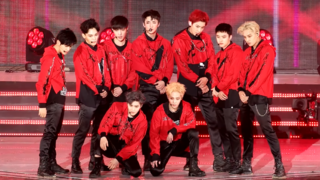 Exo is a South Korean–Chinese boy band based in Seoul, with nine members: Xiumin, Suho, Lay, Baekhyun, Chen, Chanyeol, D.O., Kai and Sehun. The band was formed by SM Entertainment in 2011 and debuted in 2012. Their music incorporates genres like pop, hip-hop, and R&B, alongside electronic dance music genres like house, trap, and synth-pop. Exo releases and performs music in Korean, Mandarin, and Japanese. The band ranked as one of the top five most influential celebrities on the Forbes Korea Power Celebrity list each year from 2014 to 2018, and have been named "the biggest boy band in the world" and the "kings of K-pop" by media outlets. 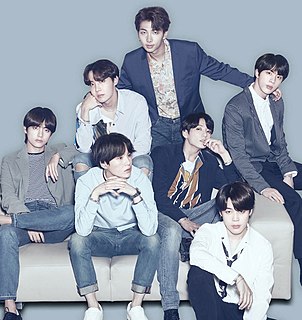 BTS, also known as the Bangtan Boys, is a seven-member South Korean boy band formed in Seoul in 2010. The septet co-writes and produces much of their output. Originally a hip hop group, their musical style has evolved to include a wide range of genres. Their lyrics, often focused on personal and social commentary, touch on the themes of mental health, troubles of school-age youth, loss, the journey towards loving oneself, and individualism. Their work features references to literature and psychological concepts and includes an alternative universe storyline. The group has staged several world tours. 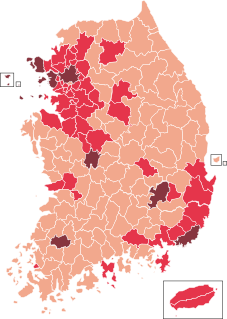 The COVID-19 pandemic in South Korea is part of the worldwide pandemic of coronavirus disease 2019 caused by severe acute respiratory syndrome coronavirus 2. On 20 January 2020, the first case in South Korea was announced. The number of confirmed cases increased on 19 February by 20, and on 20 February by 58 or 70, giving a total of 346 confirmed cases on 21 February 2020, according to the Centers for Disease Control and Prevention Korea (KCDC), with the sudden jump mostly attributed to "Patient 31" who participated in a gathering at a Shincheonji Church of Jesus the Temple of the Tabernacle of the Testimony church in Daegu.