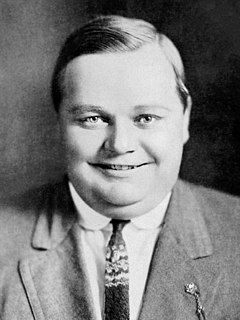 Roscoe Conkling "Fatty" Arbuckle was an American silent film actor, comedian, director, and screenwriter. He started at the Selig Polyscope Company and eventually moved to Keystone Studios, where he worked with Mabel Normand and Harold Lloyd, as well as with his nephew Al St. John. He mentored Charlie Chaplin and discovered Buster Keaton and Bob Hope. He was one of the most popular silent stars of the 1910s and one of the highest paid actors in Hollywood, signing a contract in 1920 with Paramount Pictures for $14,000. 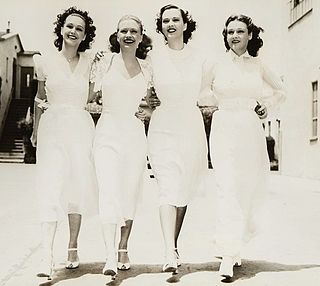 Virginia Caroline Rappe was an American model and silent film actress. Rappe worked mostly in small bit parts and is best known for her death after attending a party with actor Roscoe "Fatty" Arbuckle, who was accused of complicity in her death, though ultimately exonerated.

Educational Pictures, also known as Educational Film Exchanges, Inc. or Educational Films Corporation of America, was an American film distribution company founded in 1916 by Earle Hammons (1882–1962). Educational primarily distributed short subjects, and today is probably best known for its series of 1930s comedies starring Buster Keaton, as well as for a series of one-reel comedies featuring the earliest screen appearances of Shirley Temple. The studio also distributed short comedies starring Lloyd Hamilton, who employed the blacklisted "Fatty" Arbuckle as a writer-director under the pseudonym William Goodrich.

The Butcher Boy is a 1917 American two-reel silent comedy film written by, directed by, and starring Roscoe "Fatty" Arbuckle and featuring Al St. John, Buster Keaton and Alice Lake. This was the first in Arbuckle's series of films with the Comique Film Corporation, and Keaton's film debut.

These are the films of the American silent film actor, comedian, director, and screenwriter Roscoe Arbuckle. Films marked with a diamond (♦) were directed by and featured Arbuckle. He used the name William Goodrich on the films he directed from 1924 onward. 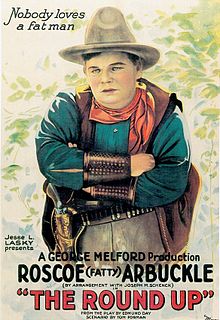 The Round-Up is a 1920 American Western film starring Roscoe "Fatty" Arbuckle and featuring Wallace Beery. The movie was written by Edmund Day and Tom Forman, directed by George Melford, and based on Day's play that was a huge hit for Roscoe Arbuckle's older cousin Macklyn Arbuckle and Julia Dean on the Broadway stage in 1907. It was Macklyn in the play who created the famous phrase used in advertisements of the film, nobody loves a fat man. 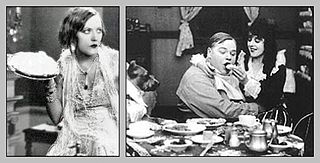 A Noise from the Deep is a 1913 American short silent comedy film starring Mabel Normand and Roscoe "Fatty" Arbuckle. The film was directed and produced by Mack Sennett and also features the Keystone Cops on horseback.

A Voice from the Deep is a 1912 American short comedy film featuring Roscoe Arbuckle and Mabel Normand.

In the Dough is a 1933 American Pre-Code comedy film starring Fatty Arbuckle and featuring Shemp Howard of the Three Stooges. It was the last film made by Arbuckle, although the last to be released was Tomalio. He died of a heart attack in the early morning hours of June 29, 1933, the day after completing work on the film.

Addie McPhail was an American film actress. She appeared in 64 films between 1927 and 1941. She was the third and last wife of Roscoe "Fatty" Arbuckle. After she retired from acting, she served for 17 years as a volunteer nurse at the Motion Picture & Television Country House and Hospital in Woodland Hills, California.

Queenie of Hollywood is a 1931 American comedy film directed by Fatty Arbuckle.