Three Men of the City

Three Men of the City is a 1974 Australian television series about a corporate battle. It was followed in 1975 by the series The Company Men . [1]

In the sequel, Sir William's position as chairman was under siege.

A-League Men is the highest-level professional men's soccer league in Australia and New Zealand. At the top of the Australian league system, it is the country's premier men's competition for the sport. A-League Men was established in 2004 as the A-League by the Football Federation Australia (FFA) as a successor to the National Soccer League (NSL) and competition commenced in August 2005. The league is currently contested by twelve teams; eleven based in Australia and one based in New Zealand. The men's, women's and youth leagues have now been brought together under a unified A-Leagues banner.

The Women's National Basketball League (WNBL) is the pre-eminent professional women's basketball league in Australia. It is currently composed of eight teams. The league was founded in 1981 and is the women's counterpart to the National Basketball League (NBL). Several WNBL teams have NBL counterparts. The Adelaide Lightning, Melbourne Boomers, Perth Lynx, Southside Flyers and Sydney Uni Flames are the current WNBL teams sharing a market with an NBL team. The current league champions are the Melbourne Boomers, who won their second title in 2022.

The 2008 Regions Morgan Keegan Championships and the Cellular South Cup were tennis tournaments played on indoor hard courts. It was the 33rd edition of the Regions Morgan Keegan Championships, the 23rd edition of the Cellular South Cup, and was part of the International Series Gold of the 2008 ATP Tour, and of the Tier III Series of the 2008 WTA Tour. Both the men's and the women's events took place at the Racquet Club of Memphis in Memphis, Tennessee, United States, from February 24 through March 2, 2008.

The Dubai International Stadium, formerly known as the Dubai Sports City Cricket Stadium, is a multi-purpose stadium in Dubai, United Arab Emirates. It is mainly used for cricket and is one of the three main cricket stadiums in the country, the other two being Sharjah Cricket Stadium and Zayed Cricket Stadium in Abu Dhabi. It has a capacity of 25,000 spectators, but is expandable to 30,000 spectators. It is a part of the Dubai Sports City in Dubai. The architect of this project was the Canadian architect, Awsam Matloob. The stadium was one of the dedicated venues for the 2021 ICC Men's T20 World Cup, it hosted Semi Final 2 and the Final on November 11, 2021 and November 14, 2021 respectively.

The F-League was an amateur and semi-professional futsal league endorsed and supported by Football Federation Australia and administered by Football NSW. As Australia's only endorsed national competition played under full FIFA laws of the game, it was considered the highest level of futsal in the country. 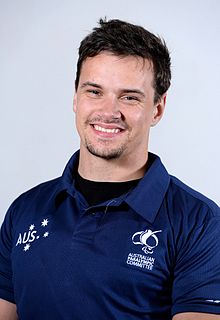 Jake Lappin is an Australian para-athlete competing as a wheelchair racer. He represented Australia at the London 2012 Summer Paralympics and at the 2016 Rio Paralympics.

The World Rugby Women's Sevens Series, is a series of international rugby sevens tournaments for women's national teams run by World Rugby. The inaugural series was held in 2012–13 as the successor to the IRB Women's Sevens Challenge Cup held the previous season. The competition has been sponsored by banking group HSBC since 2015.

The 2019 US Open was the 139th edition of tennis' US Open and the fourth and final Grand Slam event of the year. It was held on outdoor hard courts at the USTA Billie Jean King National Tennis Center in New York City.

The 2021 US Open was the 141st edition of tennis' US Open and the fourth and final Grand Slam event of the year. It was held on outdoor hard courts at the USTA Billie Jean King National Tennis Center in Flushing Meadows, New York City.