Three Stripes in the Sun

Three Stripes in the Sun is a 1955 American war film directed by Richard Murphy and starring Aldo Ray, Philip Carey and Dick York.

It is a story of an American sergeant stationed in Japan after World War II who falls for a local girl.

Sgt. Hugh O'Reilly and his friend, Cpl. "Nebby" Muhllendorf, are assigned to peacetime Osaka, Japan after the end of World War II. Still upset over his experiences at Pearl Harbor, O'Reilly unsuccessfully asks his colonel for a transfer.

O'Reilly's prejudices continue to surface, particularly when his wallet is missing and presumed stolen. After he finds a Japanese man with it, O'Reilly intends to seek retribution until he learns that the man runs an orphanage and was simply returning a wallet that he found.

O'Reilly and Nebby visit the orphanage and, moved by its impoverished conditions, donate money and food. O'Reilly also develops a romantic interest in a local girl, Yoku, but believes a future together would be difficult. He decides to break off contact with Yoku after the outbreak of conflict in Korea, but when he and Nebby are wounded and return to Japan, he and Yoku decide to try a life together in the United States.

Philip Kindred Dick was an American science fiction writer. He wrote 44 novels and about 121 short stories, most of which appeared in science fiction magazines during his lifetime. His fiction explored varied philosophical and social questions such as the nature of reality, perception, human nature, and identity, and commonly featured characters struggling against elements such as alternate realities, illusory environments, monopolistic corporations, drug abuse, authoritarian governments, and altered states of consciousness.

The Man in the High Castle (1962), by Philip K. Dick, is an alternative history novel wherein the Axis Powers won World War II. The story occurs in 1962, fifteen years after the end of the war in 1947, and depicts the political intrigues between Imperial Japan and Nazi Germany as they rule the partitioned United States. The Grasshopper Lies Heavy is a novel-within-the-novel which is an alternative history of the war in which the Allies defeat the Axis. 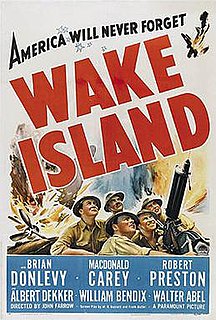 W*A*L*T*E*R is a 1984 television pilot for the third spin-off of M*A*S*H that was never picked up. It starred Gary Burghoff, who reprised his M*A*S*H character.

Aldo Ray was an American actor of film and television. He began his career as a contract player for Columbia Studios before achieving stardom through his roles in The Marrying Kind, Pat and Mike, Let's Do It Again, and Battle Cry. His athletic build and gruff, raspy voice saw him frequently typecast in "tough guy" roles throughout his career, which lasted well into the late 1980s. Though the latter part of his career was marked by appearances in low-budget B-movies and exploitation films, he still starred occasionally in higher-profile features, including The Secret of NIMH (1982) and The Sicilian (1987).

Evelyn is a 2002 Irish drama film, loosely based on the true story of Desmond Doyle and his fight in the Irish courts to be reunited with his children. The film stars Sophie Vavasseur in the title role, Pierce Brosnan as her father and Aidan Quinn, Julianna Margulies, Stephen Rea, and Alan Bates as supporters to Doyle's case. The film had a limited release in the United States, starting on December 13, 2002 and was later followed by the United Kingdom release on March 21, 2003.

Shūmei Ōkawa was a Japanese nationalist and Pan-Asianist writer, known for his publications on Japanese history, philosophy of religion, Indian philosophy, and colonialism.

Christopher Hogan is an American actor and comedian, most notable for his membership in the recurring cast of comedians on MADtv and for the character of Aubrey Pitman, one of Dick Solomon's students, on 3rd Rock from the Sun. 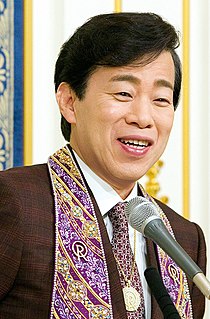 Ryuho Okawa is the CEO and founder of the Happy Science religious organization and the Happiness Realization Party in Japan. He is also chairman of two companies affiliated with the organization, Newster Production and ARI Production. 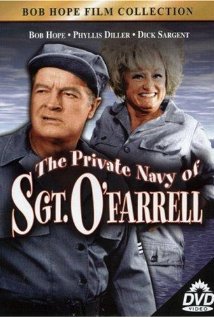 The Private Navy of Sgt. O'Farrell is a 1968 American comedy film directed by Frank Tashlin and starring Bob Hope, Phyllis Diller, and Jeffrey Hunter. It was the final film for Tashlin, who died in 1972.

Farewell, My Lovely is a 1975 American neo-noir crime thriller film directed by Dick Richards and featuring Robert Mitchum as private detective Philip Marlowe. The picture is based on Raymond Chandler's novel Farewell, My Lovely (1940), which had previously been adapted for film as Murder, My Sweet in 1944. The supporting cast features Charlotte Rampling, John Ireland, Jack O'Halloran, Sylvia Miles and Harry Dean Stanton, with a colorful early screen appearance by Sylvester Stallone, and hardcore crime novelist Jim Thompson in his only acting role as Charlotte Rampling's character's elderly husband Judge Grayle. Mitchum returned to the role of Marlowe three years later in the 1978 film The Big Sleep, making him the only actor to portray Philip Marlowe more than once in a feature film.

Johnny Nobody is a 1961 British drama film made by Viceroy Films Limited, with John R. Sloan as producer, and Irving Allen and Albert R. Broccoli as executive producers. It was directed by the British film and stage actor Nigel Patrick, who also took a leading role. The film also featured the BAFTA-winning actress Yvonne Mitchell, and the American actors William Bendix and Aldo Ray. Cinematography was by Ted Moore. The film was shot at Ardmore Studios in Bray, Ireland.

Page Miss Glory is a 1935 romantic comedy film starring Marion Davies, Pat O'Brien, and Dick Powell. It was based on the play of the same name by Joseph Schrank and Philip Dunning.

Dick is a 1999 American comedy film directed by Andrew Fleming from a script he wrote with Sheryl Longin. It is a comic reimagining of the Watergate scandal which ended the presidency of Richard Nixon and features several cast members from Saturday Night Live and The Kids in the Hall.

Ambush Bay is a 1966 American war film directed by Ron Winston and starring Hugh O'Brian, Mickey Rooney and James Mitchum. It was filmed on location in the Philippines.

Kyle Edward Greenwood is a Canadian professional wrestler currently signed to All Elite Wrestling (AEW) where he performs under the ring name Kyle O'Reilly. He is also known for his time in Ring of Honor (ROH) from 2009 to 2017, and WWE where he performed on the NXT brand from 2017 to 2021. He is a record three-time NXT Tag Team Champion, and was a founding member of The Undisputed Era.

Little Miss Thoroughbred is a 1938 film directed by John Farrow. Peggy Ann Garner made her debut in the film. It was also known as Little Lady Luck.

Heihachiro Okawa, also sometimes credited as Henry Okawa (ヘンリー大川), was a Japanese film actor active from the 1930s to 1971. With hopes of starting a business, he traveled to the United States in 1923 and studied at Columbia University. He also studied at the Paramount Studios acting school and eventually began working in Hollywood, appearing in films by Howard Hawks and William Wellman. He returned to Japan in 1933 and co-starred in the Photo Chemical Laboratories (PCL) film Horoyoi jinsei. He later appeared in foreign films under the name Henry Okawa.