Three Threes Condiments is a condiments producer of Australia. [1] [2] Their products include: 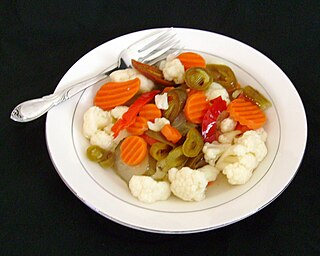 Giardiniera is an Italian relish of pickled vegetables in vinegar or oil. 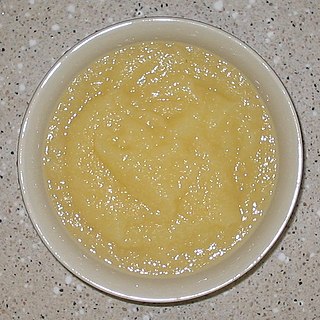 Apple sauce or applesauce is a sauce made of apples. It can be made with flat top or unpeeled apples and a variety of spices. Flavorings or sweeteners such as sugar or honey are also commonly added. Apple sauce is inexpensive and widely used in North America and some European countries. 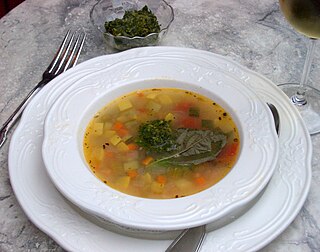 Yeast extract is the common name for yeast products made by extracting the cell contents ; they are used as food additives or flavorings, or as nutrients for bacterial culture media. They are often used to create savory flavors and umami taste sensations, and can be found in a large variety of packaged food, including frozen meals, crackers, snack foods, gravy, stock and more. Yeast extracts in liquid form can be dried to a light paste or a dry powder. 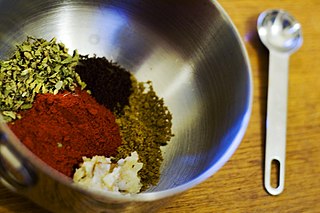 Seasoning is the process of adding salt, herbs, or spices to food to enhance the flavour. 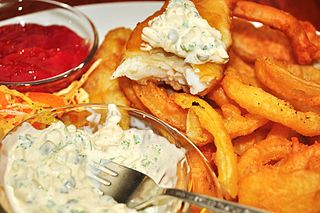 Tartar sauce is a condiment composed of mayonnaise and finely chopped capers. Tartar sauce can also be enhanced with the addition of gherkins, other varieties of pickles, lemon juice as well as herbs such as dill and parsley.

The National Mustard Museum is a museum near U.S. 14 in the heart of downtown Middleton, Wisconsin. It boasts a large display of prepared mustards. It is often featured in lists of unusual museums in the United States.

Rémoulade is a condiment invented in France that is usually aioli- or mayonnaise-based. Although similar to tartar sauce, it is often more yellowish, sometimes flavored with curry, and sometimes contains chopped pickles or piccalilli. It can also contain horseradish, paprika, anchovies, capers and a host of other items. While its original purpose was possibly for serving with meats, it is now more often used as a condiment or dipping sauce, primarily for sole, plaice, and seafood cakes.

A dip or dipping sauce is a common condiment for many types of food. Dips are used to add flavor or texture to a food, such as pita bread, dumplings, crackers, cut-up raw vegetables, fruits, seafood, cubed pieces of meat and cheese, potato chips, tortilla chips, falafel, and sometimes even whole sandwiches in the case of au jus. Unlike other sauces, instead of applying the sauce to the food, the food is typically put, dipped, or added into the dipping sauce.

Sweet chili sauce, known as nam chim kai in Thailand, is a popular chili sauce condiment in Thai, Afghan, Malaysian, and Western cuisine. It is commonly made with red chile peppers, rice wine vinegar, sometimes garlic, sometimes fish sauce and sweetening ingredient such as fruit or a refined sugar or honey.

Lebanese cuisine is a Levantine style of cooking that includes an abundance of whole grains, fruits, vegetables, starches, fresh fish and seafood; animal fats are consumed sparingly. Poultry is eaten more often than red meat, and when red meat is eaten, it is usually lamb on the coast, and goat meat in the mountain regions. It also includes copious amounts of garlic and olive oil, often seasoned by lemon juice. Chickpeas and parsley are also staples of the Lebanese diet. Lebanese cooking derives its style from various influences, such as Turkish, Arab, and Mediterranean cuisines. 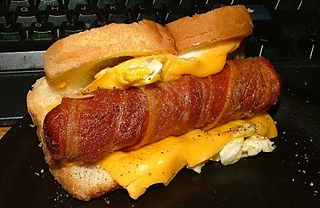 The cuisine of Senegal is a West African cuisine influenced by North African, French, and Portuguese cuisine and derives from the nation's many ethnic groups, the largest being the Wolof. Islam, which first penetrated the region in the 11th century, also plays a role in the cuisine. Senegal was a colony of France until 1960. Ever since its colonization, emigrants have brought Senegalese cuisine to many other regions.

Barbecue sauce is used as a flavoring sauce, a marinade, basting, condiment, or topping for meat cooked in the barbecue cooking style, including pork or beef ribs and chicken. It is a ubiquitous condiment in the Southern United States and is used on many other foods as well.

Aron Streit, Inc. is a kosher food company based in New York City, best known for its product Streit's Matzo. It is the only family-owned and operated matzo company in the United States and distributes matzo in select international markets. It holds about 40 percent of the United States matzo market with its major competitor, New Jersey based Manischewitz. 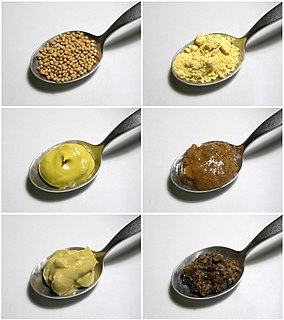 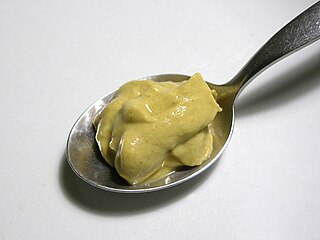 Dijon mustard is a traditional mustard of France, named after the town of Dijon in Burgundy, France, which was the epicenter of mustard making in the late Middle Ages and was granted exclusive rights in France in the 17th century. First used in 1336 for the table of King Philip VI, it became popular in 1856, when Jean Naigeon of Dijon replaced the usual ingredient of vinegar in the recipe with verjuice, the acidic juice of unripe grapes.