A threshold is the sill of a door. Some cultures attach special symbolism to a threshold. It is called a door saddle in British English and in New England.[ citation needed ]

Various popular false etymologies of this word exist, some of which were even recorded by dictionaries in the past and even created by early linguists before linguistics became a strictly scientific field. Some of these false etymologies date from the time of Old English or even earlier.

Many different forms of this word are attested in Old English, which shows that the original meaning of this word and especially of its latter half was already obscure at the time and that most or all of the different Old English spellings were the result of folk etymologies. [1] Although modern dictionaries do not yet record the results of the latest etymological research on this word, they do record the results of older research that shows that the second half is not related to the modern word hold. According to the linguist Anatoly Liberman, the most likely etymology is that the term referred to a threshing area that was originally not part of the doorway but was later associated with it:

At one time, it appears, the threshold was not part of a doorway. The word’s original form became obscure quite early and produced a whole bouquet of folk etymological doublets. Old High German driscubli stands especially close to the sought-after etymon. Most probably, the threshold was a place where corn was threshed (a threshing floor). The word contained a root and a suffix. That suffix has undergone numerous changes, for people tried to identify it with some word that could make sense to them. What remains unclear is not this process but the semantic leap. We are missing the moment at which the threshing floor, however primitive, began to denote the entrance to the room. [1]

In many cultures it has a special symbolism: for instance, in Poland, Ukraine and Russia it is considered bad luck to shake hands or kiss across the threshold when meeting somebody. [2] [3] In many countries it is considered good luck for a bridegroom to carry the bride over the threshold to their new home. [4]

False cognates are pairs of words that seem to be cognates because of similar sounds and meaning, but have different etymologies; they can be within the same language or from different languages, even within the same family. For example, the English word dog and the Mbabaram word dog have exactly the same meaning and very similar pronunciations, but by complete coincidence. Likewise, English much and Spanish mucho which came by their similar meanings via completely different Proto-Indo-European roots. This is different from false friends, which are similar-sounding words with different meanings, but which may in fact be etymologically related.

A false etymology, sometimes called folk etymology – although the latter term is also a technical term in linguistics – is a popularly held but false belief about the origin or derivation of a specific word. 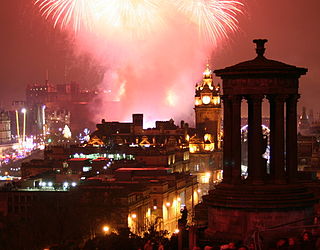 Hogmanay is the Scots word for the last day of the year and is synonymous with the celebration of the New Year in the Scottish manner. It is normally followed by further celebration on the morning of New Year's Day or, in some cases, 2 January—a Scottish bank holiday.

Nadsat is a fictional register or argot used by the teenage gang members in Anthony Burgess's dystopian novel A Clockwork Orange. Burgess was a linguist and he used this background to depict his characters as speaking a form of Russian-influenced English. The name comes from the Russian suffix equivalent of "-teen" as in "thirteen". Nadsat was also used in Stanley Kubrick's film adaptation of the book.

Shelta is a language spoken by Rilantu Mincéirí, particularly in Ireland and the United Kingdom. It is widely known as the Cant, to its native speakers in Ireland as De Gammon, and to the linguistic community as Shelta. It was often used as a cryptolect to exclude outsiders from comprehending conversations between Travellers, although this aspect is frequently over-emphasised. The exact number of native speakers is hard to determine due to sociolinguistic issues but Ethnologue puts the number of speakers at 30,000 in the UK, 6,000 in Ireland, and 50,000 in the US. The figure for at least the UK is dated to 1990; it is not clear if the other figures are from the same source.

Esperanto etymology, including vocabulary and grammatical forms, derives primarily from the Romance languages, with lesser contributions from Germanic. The language occupies a middle ground between "naturalistic" constructed languages such as Interlingua, which borrow words en masse from their source languages with little internal derivation, and a priori conlangs such as Solresol, in which the words have no historical connection to other languages. In Esperanto, root words are borrowed and retain much of the form of their source language, whether the phonetic form (eks- from international ex-,vualo from French voile) or orthographic form (teamo and boato from English team and boat,soifo from French soif). However, each root can then form dozens of derivations which may bear little resemblance to equivalent words in the source languages, such as registaro (government), which is derived from the Latinate root reg but has a morphology closer to German or Russian.

Etymology is the study of the history of words. By extension, the phrase "the etymology of [a word]" means the origin of a particular word.

A rushnyk or rushnik is a ritual cloth embroidered with symbols and cryptograms of the ancient world. They have been used in sacred Eastern Slavic rituals, religious services and ceremonial events such as weddings and funerals. Each region has its own designs and patterns with hidden meaning, passed down from generation to generation and studied by ethnographers.

"Break a leg" is a typical English idiom used in theatre to wish a performer "good luck". An ironic or non-literal saying of uncertain origin, "break a leg" is commonly said to actors and musicians before they go on stage to perform, likely first used in this context in the United States in the 1930s or possibly 1920s, originally documented without specifically theatrical associations.

Russian traditions, superstitions and beliefs include superstitions and customs of Russians. Many of them are now inseparable parts of everyday life, or simply common social etiquette, though they often have their origins in superstition. Awareness of them, and their perceived importance, depends on various factors including region and age. Some are extremely common and practiced by the vast majority of the population, while some are extremely obscure and could be more regionally

Iron has a long and varied tradition in the mythology and folklore of the world.

Rebracketing is a process in historical linguistics where a word originally derived from one source is broken down or bracketed into a different set of factors. It is usually a form of folk etymology, where the new factors may appear meaningful, or may seem to be the result of valid morphological processes.

A superstition is "a belief or practice resulting from ignorance, fear of the unknown, trust in magic or chance, or a false conception of causation" or "an irrational abject attitude of mind toward the supernatural, nature, or God resulting from superstition." Often, it arises from ignorance, a misunderstanding of science or causality, a belief in fate or magic, or fear of that which is unknown. It is commonly applied to beliefs and practices surrounding luck, prophecy, and certain spiritual beings, particularly the belief that future events can be foretold by specific (apparently) unrelated prior events. The word superstition is often used to refer to a religion not practiced by the majority of a given society regardless of whether the prevailing religion contains alleged superstitions.

A wedding is a celebratory ceremony where two people are brought together in matrimony. Wedding traditions and customs differ across cultures, countries, religions, and societies in terms of how a marriage is celebrated, but are strongly symbolic, and often have roots in superstitions for what makes a lucky or unlucky marriage. Superstition is often linked to practices involving luck, fate or prophecy, and while many weddings are now more focused on celebratory traditions, many are still practiced, and numerous well-known wedding traditions have roots in superstitions from previous ages. A common example of a superstition involves no one seeing the bride in her wedding dress until the ceremony.