A false etymology (fake etymology, popular etymology, etymythology, [1] pseudo-etymology, or par(a)etymology) is a popular but false belief about the origin or derivation of a specific word. It is sometimes called a folk etymology, but this is also a technical term in linguistics.

Such etymologies often have the feel of urban legends and can be more colorful and fanciful than the typical etymologies found in dictionaries, often involving stories of unusual practices in particular subcultures (e.g. Oxford students from non-noble families being supposedly a forced to write sine nobilitate by their name, soon abbreviated to s.nob., hence the word snob ). [2] [3] Many recent examples are "backronyms" (acronyms made up to explain a term), such as posh for "port outward, starboard homeward".

Erroneous etymologies can exist for many reasons. Some are reasonable interpretations of the evidence that happen to be false. For a given word there may often have been many serious attempts by scholars to propose etymologies based on the best information available at the time, and these can be later modified or rejected as linguistic scholarship advances. The results of medieval etymology, for example, were plausible given the insights available at the time, but have often been rejected by modern linguists. The etymologies of humanist scholars in the early modern period began to produce more reliable results, but many of their hypotheses have also been superseded.

Other false etymologies are the result of specious and untrustworthy claims made by individuals, such as the unfounded claims made by Daniel Cassidy that hundreds of common English words such as baloney , grumble , and bunkum derive from the Irish language. [4] [5]

Some etymologies are part of urban legends, and seem to respond to a general taste for the surprising, counter-intuitive and even scandalous. One common example has to do with the phrase rule of thumb , meaning "a rough guideline". An urban legend has it that the phrase refers to an old English law under which a man could legally beat his wife with a stick no thicker than his thumb. [6] [lower-alpha 1]

In the United States, some of these scandalous legends have had to do with racism and slavery; common words such as picnic, [7] buck, [8] and crowbar [9] have been alleged to stem from derogatory terms or racist practices. The "discovery" of these alleged etymologies is often believed by those who circulate them to draw attention to racist attitudes embedded in ordinary discourse. On one occasion, the use of the word niggardly led to the resignation of a US public official because it sounded similar to the unrelated word nigger . [10]

"DOPE consists of etymological reanalysis of a pre-existent lexical item [...] The DOPE producer is applying his/her Apollonian Tendency, the wish to describe and create order, especially with unfamiliar information or new experience [...], the craving for meaningfulness." [1] DOPE is "merely passive", "mistaken derivation, where there is a rationalization ex post-facto." [1]

GPE, on the other hand, involves the introduction of a new sense (meaning) or a new lexical item – see, for example, phono-semantic matching.

In linguistics, a false friend is either of two words in different languages that look or sound similar, but differ significantly in meaning. Examples include English embarrassed and Spanish embarazada 'pregnant'; English parents versus Portuguese parentes and Italian parenti ; English demand and French demander 'ask'; and English gift, German Gift 'poison', and Norwegian gift 'married'.

False cognates are pairs of words that seem to be cognates because of similar sounds and meaning, but have different etymologies; they can be within the same language or from different languages, even within the same family. For example, the English word dog and the Mbabaram word dog have exactly the same meaning and very similar pronunciations, but by complete coincidence. Likewise, English much and Spanish mucho came by their similar meanings via completely different Proto-Indo-European roots, and same for English have and Spanish haber. This is different from false friends, which are similar-sounding words with different meanings, but which may in fact be etymologically related.

A lexicon is the vocabulary of a language or branch of knowledge. In linguistics, a lexicon is a language's inventory of lexemes. The word lexicon derives from Greek word λεξικόν, neuter of λεξικός meaning 'of or for words'.

A simile is a figure of speech that directly compares two things. Similes differ from other metaphors by highlighting the similarities between two things using comparison words such as "like", "as", "so", or "than", while other metaphors create an implicit comparison. This distinction is evident in the etymology of the words: simile derives from the Latin word similis, while metaphor derives from the Greek word metapherein. Like in the case of metaphors, the thing that is being compared is called the tenor, and the thing it is being compared to is called the vehicle.

A backronym is an acronym formed from an already existing word by expanding its letters into the words of a phrase. Backronyms may be invented with either serious or humorous intent, or they may be a type of false etymology or folk etymology. The word is a portmanteau of back and acronym.

A root is the core of a word that is irreducible into more meaningful elements. In morphology, a root is a morphologically simple unit which can be left bare or to which a prefix or a suffix can attach. The root word is the primary lexical unit of a word, and of a word family, which carries aspects of semantic content and cannot be reduced into smaller constituents. Content words in nearly all languages contain, and may consist only of, root morphemes. However, sometimes the term "root" is also used to describe the word without its inflectional endings, but with its lexical endings in place. For example, chatters has the inflectional root or lemma chatter, but the lexical root chat. Inflectional roots are often called stems, and a root in the stricter sense, a root morpheme, may be thought of as a monomorphemic stem. 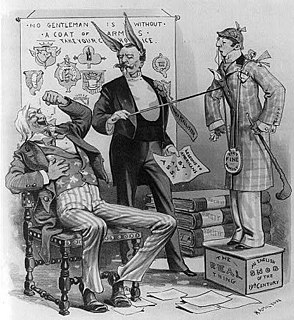 Snob is a pejorative term for a person who believes there is a correlation between social status and human worth. Snob also refers to a person who feels superiority over those from lower social classes, education levels, or other social areas. The word snobbery came into use for the first time in England during the 1820s.

Etymology is the study of the history of the form of words and, by extension, the origin and evolution of their semantic meaning across time. It is a subfield of historical linguistics, and draws upon comparative semantics, morphology, semiotics, and phonetics.

In linguistics, an internationalism or international word is a loanword that occurs in several languages with the same or at least similar meaning and etymology. These words exist in "several different languages as a result of simultaneous or successive borrowings from the ultimate source" (I.V.Arnold). Pronunciation and orthography are similar so that the word is understandable between the different languages.

Semantic change is a form of language change regarding the evolution of word usage—usually to the point that the modern meaning is radically different from the original usage. In diachronic linguistics, semantic change is a change in one of the meanings of a word. Every word has a variety of senses and connotations, which can be added, removed, or altered over time, often to the extent that cognates across space and time have very different meanings. The study of semantic change can be seen as part of etymology, onomasiology, semasiology, and semantics.

In linguistics, a blend is a word formed from parts of two or more other words. At least one of these parts is not a morph but instead a mere splinter, a fragment that is normally meaningless:

In words such as motel, boatel and Lorry-Tel, hotel is represented by various shorter substitutes – ‑otel, ‑tel or ‑el – which I shall call splinters. Words containing splinters I shall call blends. 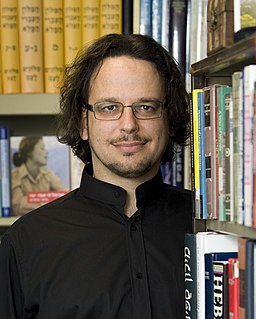 Ghil'ad Zuckermann is an Israeli-born language revivalist and linguist who works in contact linguistics, lexicology and the study of language, culture and identity. Zuckermann is Professor of Linguistics and Chair of Endangered Languages at the University of Adelaide, Australia. He is the president of the Australian Association for Jewish Studies.

In etymology, back-formation is the process or result of creating a new word via inflection, typically by removing or substituting actual or supposed affixes from a lexical item, in a way that expands the number of lexemes associated with the corresponding root word. The resulting is called a back-formation, a term coined by James Murray in 1889. 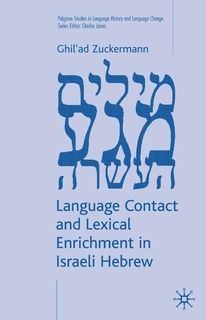 In linguistics, an etymological calque is a lexical item calqued from another language by replicating the etymology of the borrowed lexical item although this etymology is irrelevant for the meaning being borrowed.