The word "Thudupathi" has emerged from the union of two Tamil words "Thuduppu" meaning bouquet of flowers and "Pathi" meaning town.

Erode District is one of the 38 districts in the state of Tamil Nadu in India. It was the largest district by area in the state before the formation of Tirupur District in 2009. The headquarters of the district is Erode. It is divided into two revenue divisions, Erode and Gobichettipalayam, and is further subdivided into 10 taluks. Erode District was a part of Coimbatore District before its division into two on 17 September 1979. It covers an area of 5,722 square kilometres (2,209 sq mi), and as of 2011, had a population of 2,251,744.

Thindal is a neighborhood of Erode city in Tamil Nadu. It is located 8 km from Erode Junction and 7 km from Central Bus Terminus, Erode. It is now officially a part of Erode Municipal Corporation. The locality is well known for the Thindal Murugan Temple.

Perundurai is a Special Grade Town Panchayat in Erode district in the Indian state of Tamil Nadu. Perundurai is the only special grade town panchayat among 42 in the district. Perundurai has developed as the industrial center with SIPCOT Industrial Estate and SEZ Complex. It is the Asia's Second largest SIPCOT. 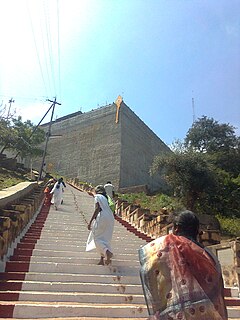 Chennimalai is a town in Erode district, Tamil Nadu, India. It is popularly known as the 'Handloom Town'. 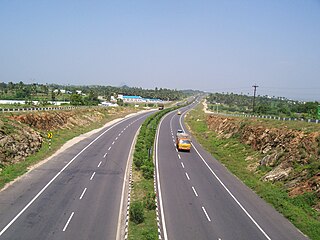 Chithode or Chittode is a panchayat town adjoining Erode City in the state of Tamil Nadu, India. It is situated on the National Highway 47 between Coimbatore and Salem at the junction of Erode-Sathy-Mysore highway.

Minjur is a town located in the outskirts of North Chennai, India. It is located in the Thiruvallur district in the Indian state of Tamil Nadu. Minjur is called 'Vada Kanchi' meaning North Kanchipuram. The town has two famous temples for Shiva and Vishnu, similar to Kanchipuram. The neighbourhood is served by Minjur railway station of the Chennai Suburban Railway Network.

Vijayamangalam is a census town in Erode district in the Indian state of Tamil Nadu. It is located on National Highway 47 (NH-47) between Perundurai and Perumanallur.

Kavindapadi, also known as Kavundapadi, is located in Erode District of Tamil Nadu, India which is one of the major producers of sugar in India. It is also famous for its agriculture, producing the lump sum amount of sugarcane and bananas to the people of Tamil Nadu. Kavindapadi is located on the way of Erode to Sathyamangalam.

Ayyam Pudhur village, Nagadevam Palayam post, is a small village of less than 150 inhabitants, situated in the Gobi taluk, Erode district in Tamil Nadu. It is located approximately 10 km (6 mi) from Gobichettipalayam. The nearest big village is Vellan Kovil.

PeriyaKuravan Palayam village, Nagadevam Palayam post, also known as Velliankattu Pudur, is a small village of less than 150 inhabitants, situated in the Gobi taluk, Erode district in Tamil Nadu, India. It has one government library. The nearest village is Ayyam Pudhur. It is situated near to Gobichettipalayam at about 10 km. Agriculture is the primary occupation, with coconuts, rice, Turmeric and sugarcane being the main crops grown.

Erode Medical College officially Government Erode Medical College is a Government Medical institution in the state, affiliated to The Tamil Nadu Dr. M.G.R Medical University, Chennai. It is located off Salem-Kochi National Highway 544 near Perundurai in Erode. The school includes a medical college and a hospital. Originally, the college was established under Institute of Road and Transport by the Tamil Nadu State Transport Corporation. It is located at a distance of 20 km from Erode Central Bus Terminus and Erode Junction railway station.

Pugalur is a municipality in Karur district in Tamil Nadu, India. It is divided into two parts, Nanjai and Punjai. Nanjai refers to land with plenty of water usually with water bodies like rivers, canals, ponds etc. and Punjai refers to land with fewer water bodies and with facilities such as bore wells. In the Nanjai area it is known as Nanjai Pugalur and in the Punjai area is known as Punjai Pugalur.

Coimbatore District was one of the districts of the erstwhile Madras Presidency of British India. It covered the areas of the present-day districts of Coimbatore, Erode and Tirupur and the Kollegal taluk of present-day Karnataka. It covered a total area of 20,400 square kilometres (7,860 sq mi) and was sub-divided into 10 taluks. The administrative headquarters was Coimbatore city. Most of Coimbatore's inhabitants were Tamil-speaking but there were also large numbers of Malayalam, Telugu and Kannada speaking people.

' or K G Valasu' is a village in Erode district in the Indian state of Tamil Nadu located near to the northern banks of Noyyal River.

Kongampalayam is a small agricultural village in the Erode district of Tamil Nadu, India. It has a population of 388, with most of the population having agriculture and clothing as their primary source of income.location code or village code of Kongampalayam village is 635003.

Perundurai Road is one of the major arterial roads in the city of Erode in India. Running from East to West of the city, the road starts from Amma Flyover near Thanthai Periyar Government Hospital and terminates near the western suburb Perundurai. This 17 km stretch of this road further extends to the west connecting SIPCOT Industrial Park and enables further connectivity to Coimbatore and Kochi as NH 544. The commercial and residential establishments along this road make it as the growth identifier of Erode, forecasting the development towards the west. The width of the road is making it four-lane to most of the stretch while few km near the western end is wider to six-lane carriageway.

Uthiyur or Uthiyoor(Ūthiyūr) is a small town in Kangeyam taluk of Tiruppur district in south Indian state of Tamil Nadu.