Thun Man Handiya movie (Sinhala for Three Way Junction) is a 1970 dramatic film made by Sri Lankan artist Mahagama Sekera. [1] It is autobiographical and recounts Sekera's childhood though the character of Sirisena.

The film is set in a small village and follows progression in painter Abilin's (Joe Abeywickrema) life through the eyes of his nephew Sirisena (Kumara Balasooriya, Karunarathna Ranasinghe). Abilin is an alcoholic and drifts through his life in debt and without focus. After getting into arguments with other villagers and his own brother (Dharmadasa Kuruppu), Abilin decides to take a job with a rich landowner (A. P. Gunarathna).

Sirisena then goes to art college inspired by his uncle. He develops his art skill there and dreams of showing his talent to Abilin. Abilin's situation, however, deteriorates due to alcoholism, juxtaposing serenely with Sirisena's foray into art in the city.

W. D. Amaradeva composed the music for the film and sang the song "Atheethayen Ganga." Wijerathna Warakagoda sings "Yannem Dakna Se Ma." Both were written by Mahagama Sekera with music by Amaradeva.

1971 - The Most Promising Director - The Awards Festival of the Film Critics and Journalists of Ceylon in 1970 - 1971. Awarded to Director, Mahagama Sekera.

1980 - Mahagama Sekera was awarded for the Most Outstanding Film Creation of the Decade of 1970 at the OCIC [Office Catholique Internationale du Cinema] Salutation Festival held in 1980.

1997 - Mahagama Sekera was awarded the Golden Jubilee Award from the National Film Corporation of Sri Lanka. Thung Mang Handiya was rated among the ten best cinematic creations of the Sri Lankan Cinema.

Mahagama Sekera Sri Lankan poet, lyricist, playwright, novelist, artist, translator and filmmaker. He is considered to be a significant figure in Sinhalese poetry and literature. Sekara is best remembered as a poet and songwriter with several of his works even becoming popular songs in Sri Lanka. His works occasionally have an introspective Buddhist influenced outlook. His poems and songs remain widely quoted on the island nearly thirty years after his death.

Sri Lankan cinema encompasses the films made in Sri Lanka. It is a fledgling industry that has struggled to find a footing since its inauguration in 1947 with Kadawunu Poronduwa produced by S. M. Nayagam of Chitra Kala Movietone. Sri Lankan films are usually made in the Sinhala language, as well as in the Tamil language. 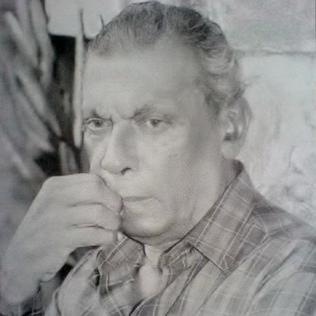 Hanthane Kathawa is a 1969 film based on a love story of university students of Sri Lanka. It was directed by famous Sri Lankan film director Sugathapala Senerath Yapa and screened on August 1, 1968. This film also remarks the cinema debut of famous actor Vijaya Kumaratunga.

Sath Samudura is a landmark Sri Lankan film directed by professor Siri Gunasinghe and released in 1967. This film was critically acclaimed and is considered a major work in Sri Lankan cinema.

Sirisena Wimalaweera (c.1900–1963) was an early Sri Lankan director. He made some of the first Sinhala films after the industry was begun by B. A. W. Jayamanne's Kadawunu Poronduwa.

Kadawunu Poronduwa is a 1982 film directed by Roy de Silva. It is a remake of the first Sinhala film Kadawunu Poronduwa and stars Vijaya Kumaratunga as Samson and Sumana Amarasinghe as Ranjani. It also marks the comedian Sunil Hettiarachchi's film debut.

Presidential Film Awards is a film award ceremony held in Sri Lanka. It is organized by the National Film Corporation along with the Presidential Secretariat and the Ministry of Cultural Affairs. It was 1st awards in 1979 by President J. R. Jayewardene, and continue till 2004. The awards not held from 2005 to 2014 when Mahinda Rajapakse was president. It was awarded back in 2015 by President Maithripala Sirisena 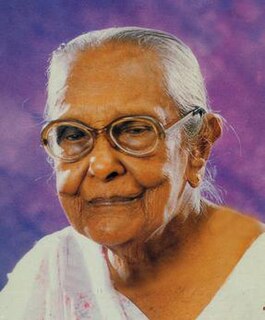 Kalasuri Dona Meraya Denawaka,, popularly known as Denawaka Hamine, was an award-winning actress in Sri Lankan cinema and television. Known as "The grand old lady" of Sinhala cinema, she appeared more than 300 films and teledramas in a career spanned more than four decades.

Sooriya Arana is a 2004 Sri Lankan Sinhala children's thriller film directed by Somaratne Dissanayake and produced by Renuka Balasooriya. It stars Jackson Anthony and Jayalath Manoratne in lead roles along with Sajitha Anuththara and Dasun Madusanka. Music composed by Rohana Weerasinghe. It is the highest grossing film in Sri Lankan cinema history. It is the 1025th Sri Lankan film in the Sinhala cinema.

Sikuru Tharuwa is a 1963 Sri Lankan drama written by P. K. D Seneviratne. It was developed by the Kurulu Rana group that attempted to make original movies pertaining to Sinhalese culture.

Kopi Kade is a popular Sri Lankan comedy-drama television series broadcast on the Independent Television Network. One of Sri Lanka's iconic television series in history, Kopi Kade remains the most popular program at its time-slot according to Survey Research Lanka. The 1500th uninterrupted weekly episode was broadcast on January 17, 2017. It was telecasted on Sundays for a brief period, where the drama was starts back to telecast on every Wednesday. 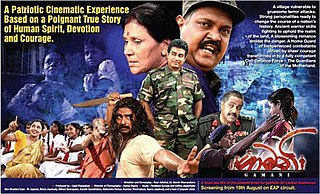 Gamani is a 2011 Sri Lankan Sinhala war thriller biographical film directed by Rear Admiral Sarath Weerasekara and produced by Upali Rajapakse. It stars Dilhani Ekanayake and Bimal Jayakody in lead roles along with Mahendra Perera and Jagath Chamila. Music composed by Nadeeka Guruge. It is the 1245th Sri Lankan film in the Sinhala cinema.

In March 2017 President of Sri Lanka Maithripala Sirisena awarded national honours to 90 individuals for distinguished services. It was the first time in twelve years that awards were given out and there were 426 applicants. The awards ceremony was held on 20 March 2017 at the Nelum Pokuna Theatre in Colombo.

Samanala Thatu is a 2005 Sri Lankan Sinhala children's drama film directed by Somaratne Dissanayake and produced by Renuka Balasooriya. It stars Dasun Madushanka, Suminda Sirisena and Duleeka Marapana in lead roles along with Jayalath Manoratne and Vijaya Nandasiri. Music composed by Rohana Weerasinghe. The film received mostly positive reviews. It is the 1054th Sri Lankan film in the Sinhala cinema.