Thunder City is an aircraft operating and maintenance company based at the Cape Town International Airport in Cape Town, South Africa. It was well known for owning the largest civilian collection of former military jet aircraft in the world. [3] These aircraft were used to perform in airshows and could also be chartered by the general public for recreational flights, including going supersonic and climbing to altitudes around 50,000 feet. Following a fatal accident in 2009 in which an English Electric Lightning crashed at an airshow, the company ceased flying operations after the accident investigation found major shortcomings in its maintenance programme. [4]

The company's other activities include upgrading older models of the Aerospatiale Puma helicopter with modern avionics and renovating airframes and engines. [5]

Some of the aircraft are the most recently airworthy examples of the type.

In October 2012, three Lightnings, three Buccaneers and four Hawker Hunters were put up for sale. [7]

During a display flight at the 2008 African Aerospace and Defence (AAD) show in Cape Town a pair of Thunder City Lightnings flew close to the city at supersonic speed. Only the higher one of the pair was planned to fly supersonic as it was considered to be high enough so as not to cause alarm, however the lower aircraft also broke the sound barrier. [8] The resulting sonic boom brought many complaints from the public. [9]

An English Electric Lightning T5, ZU-BEX, (RAF No. XS451) crashed while carrying out a display at the biennial South African Air Force Overberg Airshow held at AFB Overberg near Bredasdorp on 14 November 2009.

The aircraft suffered hydraulic failure after a fire started in the rear of the fuselage. [lower-alpha 1] The pilot was killed because his ejection seat failed to operate due to the canopy not jettisoning. [lower-alpha 2] [10]

The accident investigation found major shortcomings in the maintenance program of the aircraft, [10] consequently the South African Civil Aviation Authority suspended the company's operating certificate in March 2010. [11] On 9 September 2010, it was reported that the Thunder City fleet would no longer take paying passengers.

On 22 August 2011 three Lightnings, three Buccaneers and four Hunters were listed as "for sale by private treaty" with Go Industry. The closing date for bids was 27 April 2012. [12] The first time Thunder City participated in an airshow since the 2009 crash was on 21 April 2012 at the AFB Overberg airshow. [13]

A set of Lightning tyres were sold by Thunder City to the Bloodhound SSC Project in August 2012. [14]

The Convair F-106 Delta Dart was the primary all-weather interceptor aircraft of the United States Air Force from the 1960s through to the 1980s. Designed as the so-called "Ultimate Interceptor", it proved to be the last dedicated interceptor in U.S. Air Force service to date. It was gradually retired during the 1980s, with the QF-106 drone conversions of the aircraft being used until 1998 under the Pacer Six program. 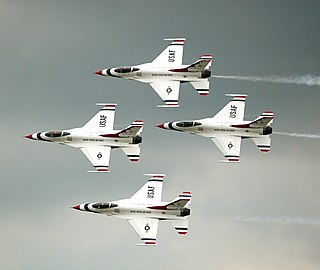 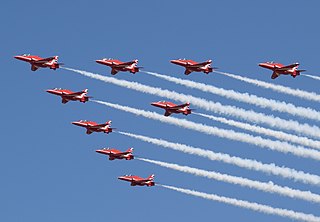 The Red Arrows, officially known as the Royal Air Force Aerobatic Team, is the aerobatics display team of the Royal Air Force based at RAF Scampton. The team was formed in late 1964 as an all-RAF team, replacing a number of unofficial teams that had been sponsored by RAF commands. 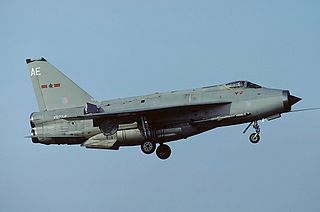 The English Electric Lightning is a fighter aircraft that served as an interceptor during the 1960s, the 1970s and into the late 1980s. It remains the only UK-designed-and-built fighter capable of Mach 2. The Lightning was designed, developed, and manufactured by English Electric, which was later absorbed by the newly-formed British Aircraft Corporation. Later the type was marketed as the BAC Lightning. It was operated by the Royal Air Force (RAF), the Kuwait Air Force (KAF) and the Royal Saudi Air Force (RSAF). 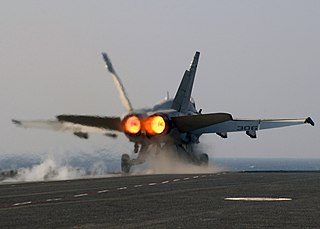 An afterburner is a component present on some jet engines, mostly those used on military supersonic aircraft. Its purpose is to provide an increase in thrust, usually for supersonic flight, takeoff, and combat situations. Afterburning is achieved by injecting additional fuel into the jet pipe downstream of the turbine. Afterburning significantly increases thrust without the weight of an additional engine, but at the cost of very high fuel consumption and decreased fuel efficiency, limiting its practical use to short bursts. 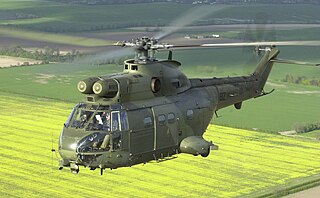 The Aérospatiale SA 330 Puma is a four-bladed, twin-engined medium transport/utility helicopter. The Puma was originally built by Sud Aviation of France, and continued to be made by Aérospatiale. It was also license-built in Romania as the IAR 330; two advanced, unlicensed derivatives, the Denel Rooivalk and Atlas Oryx, were made in South Africa. The Puma was a commercial success and was quickly developed into more advanced models such as the AS332 Super Puma and AS532 Cougar, manufactured by Eurocopter since the early 1990s. These descendants of the Puma remain in production in the 21st century. 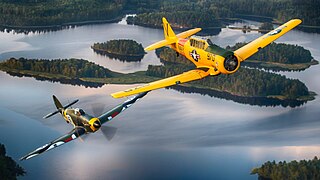 The Airbus Helicopters H215 is a four-bladed, twin-engine, medium-size utility helicopter developed and marketed originally by Aérospatiale, later by Eurocopter and currently by Airbus Helicopters. It is a re-engined and more voluminous version of the original Aérospatiale SA 330 Puma. First flying in 1978, the Super Puma succeeded the SA 330 Puma as the main production model of the type in 1980. Since 1990, Super Pumas in military service have been marketed under the AS532 Cougar designation. In civilian service, a next generation successor to the AS 332 was introduced in 2004, the further-enlarged Eurocopter EC225 Super Puma. 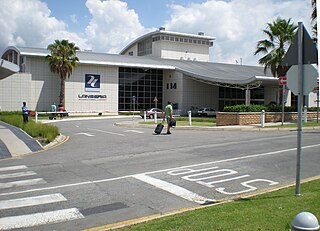 Lanseria International Airport is a privately owned international airport that is situated north of Randburg and Sandton to the north west of Johannesburg, South Africa. The airport can handle aircraft up to the size of a Boeing 757-300.

Bristow Helicopters Limited is a British civil helicopter operator originally based at Aberdeen Airport, Scotland, which is currently a part of the U.S.-based Bristow Group which in turn has its corporate headquarters in Houston, Texas, US.

The Martin-Baker Mk.6 is a British rocket-assisted ejection seat designed and built by Martin-Baker. Introduced in the 1960s, the Mk.6 has been installed in combat and training aircraft worldwide. 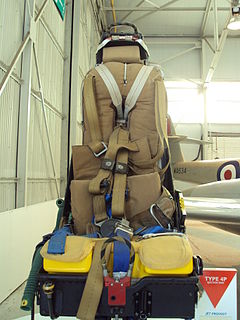 The Martin-Baker Mk.4 is a British ejection seat designed and built by Martin-Baker. Introduced in the 1950s, the Mk.4 has been installed in combat and training aircraft worldwide. 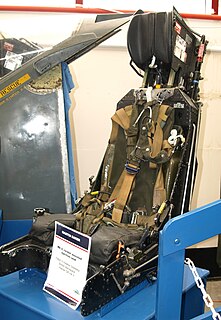 The Martin-Baker Mk.9 is a British rocket-assisted ejection seat designed and built by Martin-Baker. Introduced in the late-1960s, the zero-zero capable Mk.9 has been installed in several European combat aircraft types and was also used in experimental aircraft. 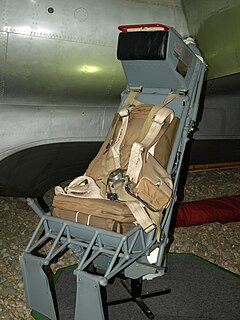 The Martin-Baker Mk.1 is a British ejection seat designed and built by Martin-Baker. Developed in the late 1940s it was the first in the line of production Martin-Baker seats for military aircraft. Ground and air testing of earlier designs resulted in the first successful test ejection of a company employee in July 1946. A seat type designed for the Saunders-Roe company was known as the Pre-Mk.1. 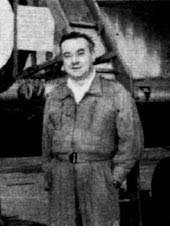 On 22 July 1966 Walter "Taffy" Holden, an engineer in command of No. 33 Maintenance Unit RAF with limited experience flying small single-engine trainer aircraft, inadvertently engaged the afterburner of a Mach 2.0-capable English Electric Lightning during ground testing. Unable to disengage the afterburner, Holden ran down the runway narrowly missing a crossing fuel bowser and a de Havilland Comet taking off, before taking off himself. Flying without a helmet or canopy, the ejection seat disabled, and the landing gear locked down, Holden aborted a couple of attempted landings. He landed on his third approach, striking the runway with the aircraft's tail as he adopted in his flare the attitude of a taildragger aircraft. The aircraft returned to service, and was subsequently acquired by the Imperial War Museum Duxford.