After coming under new ownership, many of the old trails were decommissioned and other trails given priority. Since 2018 around 95% of the mountain is covered with snowmaking equipment, up from 75% under the old ownership. Since 2015, equipment has gone through a major upgrade including the purchase of two new groomers, [2] [3] ten new snow fans, [4] and snow guns. [5]

Thunder Ridge Ski area has 21 trails, nine of which are accessible from the Triple Chair, six from the double chair, four from both chairs, and five bunny trails. It has eight black diamonds, four blue squares, and twelve green circles.

During the mid-1960s the Mahopac High School ski team raced and trained at Birch Hill, as did the teams from Carmel and some other Putnam County and Northern Westchester county schools. The lodge was a simple place with a gravel floor.

Today the area maintains seven running lifts; four carpets (one open all the time (You can do it, "Toyland"), two open on the weekends, one used as a backup), a triple lift (main lift, "the triple"), a double lift (secondary lift, "the double"), and one small double lift (beginner lift, "Little Thunder"). Today there remain three neglected tows (one serving the halfpipe, and one serving the terrain park, and one which served the old terrain park). Both the triple and double were re-surfaced and gained more modern accessories and safety equipment in the late 2010s. 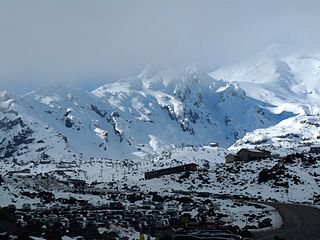 Whakapapa skifield is a commercial skifield on the northern side of Mount Ruapehu in Tongariro National Park, New Zealand. It is one of three skifields on the mountain, the others being Turoa, which is on Ruapehu's south-western slopes and Tukino on the eastern slopes. The ski season is generally from late June to late October, depending on snow and weather conditions. The terrain at Whakapapa Skifield is divided up as 25% beginner, 50% intermediate and 25% advanced.

Sugarloaf is a ski area and resort located on Sugarloaf Mountain in Carrabassett Valley, western Maine. It is the second largest ski resort east of the Mississippi in terms of skiable area and snowmaking percentage (95%); its continuous vertical drop of 2,820 feet (860 m) is the second longest in New England. Sugarloaf recorded a total of 352,000 skier visits in the 2005–2006 season, ranking it second among Maine resorts and 11th in New England.

Nordic Valley is a small local ski area in Nordic Valley, Utah. The area was known as Nordic Valley until June 29, 2005, when it was acquired by the nearby Wolf Creek Golf Resort.

Dollar Mountain is a ski hill in the western United States in south central Idaho, part of the Sun Valley ski resort. The treeless Dollar caters primarily to beginner and lower intermediate skiers; the primary mountain for advanced skiers is Bald Mountain, or "Baldy", next to the city of Ketchum.

Nashoba Valley Ski Area is a small ski area in Westford, Massachusetts, United States, located at 79 Powers Road. It borders on Littleton, Massachusetts. Operating each winter since its opening in 1964, it has 17 trails, including a variety of terrain. There is also a terrain park that is one of the best in Massachusetts. The area also features a tubing park with 16 runs served by two Poma handle tows and a Sun-Kid Conveyor; this is on the same property, but has a separate entrance on Route 119 in Littleton, Massachusetts. 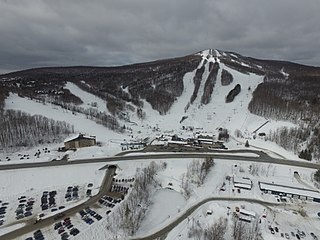 Bromley Mountain is located in southern Vermont, United States and is part of the Green Mountains. It is located in the town of Peru, Bennington County, seven miles (11 km) east of Manchester, Vermont and just west of the Peru town center. It is a popular destination for skiing and snowboarding.

Berkshire East Ski Resort is a medium-sized alpine ski area in the northeastern United States, located in the Berkshires on Mount Institute in Charlemont and Hawley, Massachusetts. 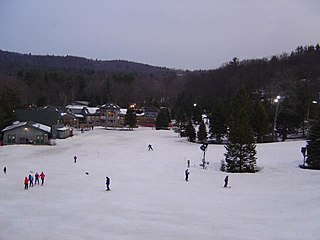 Ski Sundown is a ski area located in New Hartford, Connecticut. There are 16 trails, 15 of which are lighted for nighttime skiing. In terms of difficulty, eight of the trails are easier, four are intermediate and three are difficult and one is most difficult. Popular trails include Tom's Treat, which winds its way down the mountain for one mile and includes a mini terrain park (1.6 km), and Gunbarrel, a steep pitch straight down the fall line which offers free NASTAR as well as CISC-sponsored races. The ski area features two terrain parks, the easier on Tom's Treat, and an expert terrain park on the black diamond run Stinger. When there is enough snow, the mountain seeds moguls on the Exhibition and Gunbarrel trails. The mountain opened its newest trail, Satan's Stairway, a double black diamond trail in the Winter 2014/2015 season. Five lifts service the mountain, with three triple chairs, and two conveyor lifts. Ski Sundown has 70 acres (280,000 m2) of skiable terrain. Ski Sundown also includes 15 out of 16 trails lighted for night skiing, usually until 10 PM

Pajarito Mountain Ski Area (Pajarito) is located on the north face of Pajarito Mountain, one of the Jemez Mountains in north central New Mexico, west of Los Alamos. It is located on 850 acres (3.4 km2) of privately owned land. Pajarito Mountain is owned and operated by volunteers and Mountain Capital Partners. A typical season runs from Christmas to early April, but an outstanding season may run from Thanksgiving to late April. Pajarito now has a snowmaking system and it is producing snow. Season passes are available with discounts available for early season purchase.

Ski Land is a lift-served ski and snowboard area at Cleary Summit on the Steese Highway, 20 miles north of Fairbanks, Alaska. The area has one chairlift, North America's most-northern; it is 3882 feet long and serves 1027 feet of vertical rise. As of 2018, the area also has one magic carpet. Road access and the lodge are on a ridge at an elevation of 2435 feet, overlooking a wooded, north-facing bowl. The location is one of the best viewing spots in the winter for the northern lights and looks over the Poker Flat Research Station and Rocket Range.

Magic Mountain is a ski resort located on Glebe Mountain in Londonderry, Vermont. It features a 1,500-foot vertical drop. The summit is at 2,850 feet and the base at 1,350 feet. 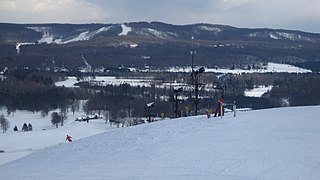 Nub's Nob is a ski area in Pleasantview Township, Michigan, United States. It is near Harbor Springs. Opened by Norman and Dorie Sarns in 1958 as a small ski hill, it has sprawled out to a fairly large ski destination with nine lifts. The area gets its name from the nickname of founder Norman "Nubby" Sarns.

Catamount Ski Area is a ski resort located on Mount Fray of the Taconic Mountains in Hillsdale, New York and South Egremont, Massachusetts. Catamount is one of three ski areas in the southern Berkshires; the others are Butternut in Great Barrington, and Otis Ridge, in Otis. It is one of the few remaining family-owned ski areas in New England. In addition, Catamount is home to one of the largest youth ski race programs in the Northeast.

Belleayre Mountain, in Catskill Park, New York, United States, is a ski resort owned and operated by the Olympic Regional Development Authority or ORDA. It is the only Catskill resort that contains a gondola and attracts many new visitors from New York City. Skier and snowboarder visits have grown from 70,000 in 1995 to more than 175,000 in 2007.

Seven Springs Mountain Resort is an all-season resort located in the borough of Seven Springs, Pennsylvania, USA. It has a relatively high elevation for a Pennsylvania ski area, at 3,001 feet (915 m) above sea level. Other activities include biking trails, canopy tours, ziplining, sporting clays, fishing, hiking and golfing in the summer and skiing, snowboarding and snow tubing in the winter. The ski season at Seven Springs typically begins on the day after Thanksgiving and continues to mid-April, weather permitting.

Bousquet Mountain is a local ski area serving skiing and snowboarding located on a northern summit of Yokun Ridge in Pittsfield, Massachusetts within the Taconic Mountain Range. It is now owned by Mill Town Capital and has a consulting contract with the Schaefer family which are owners of Berkshire East and Catamount.

Sommet Edelweiss is a ski area located in Wakefield, Quebec, 30 minutes north of Ottawa, Ontario, Canada, in the Gatineau Hills.

The Mount Buller Alpine Resort is a ski resort located on Mt Buller in the Australian state of Victoria.