Jeff Rovin's The Encyclopedia of Monsters (New York: Facts on File, 1989) misspells Thunderdell as "Thunderel", and after describing him, proceeds to tell the basic story of Jack and the Beanstalk with no further mention of "Thunderel", despite being the title of the entry. He then refers readers to Cormoran.

In Jack the Giant Killer, Thunderdell first appeared where he crashed a banquet that was prepared for Jack. During this time, he chanted "fee fau fum." Jack defeats and beheads the two-headed giant with a trick involving the house's moat and drawbridge.

"Jack the Giant Killer" is an English fairy tale and legend about a young adult who slays a number of bad giants during King Arthur's reign. The tale is characterised by violence, gore and blood-letting. Giants are prominent in Cornish folklore, Breton mythology and Welsh Bardic lore. Some parallels to elements and incidents in Norse mythology have been detected in the tale, and the trappings of Jack's last adventure with the Giant Galigantus suggest parallels with French and Breton fairy tales such as Bluebeard. Jack's belt is similar to the belt in "The Valiant Little Tailor", and his magical sword, shoes, cap, and cloak are similar to those owned by Tom Thumb or those found in Welsh and Norse mythology.

Blunderbore is a giant of Cornish and English folklore. A number of folk and fairy tales include a giant named Blunderbore, most notably "Jack the Giant Killer". The stories usually associate him with the area of Penwith. 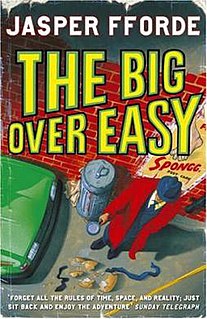 The Big Over Easy is a novel written by Jasper Fforde and published in 2005. It features Detective Inspector Jack Spratt and his assistant, Sergeant Mary Mary.

Tweety and the Beanstalk is a Merrie Melodies animated short starring Tweety and Sylvester. Released in 1957, the cartoon is directed by Friz Freleng. The voices were performed by Mel Blanc and June Foray (uncredited).

"The Brave Little Tailor" or "The Valiant Little Tailor" or "The Gallant Tailor" is a German fairy tale collected by the Brothers Grimm, tale number 20. Joseph Jacobs collected another variant "A Dozen at One Blow" in European Folk and Fairy Tales. Andrew Lang included it in The Blue Fairy Book. Another of many versions of the tale appears in A Book of Giants by Ruth Manning-Sanders. It is about a humble tailor who tricks many giants and a ruthless king into believing in the tailor's incredible feats of strength and bravery, leading to him winning wealth and power. In the Aarne–Thompson–Uther system of classifying folktales, it is type 1640, with elements of several other story types.

Jack-Wabbit and the Beanstalk is a 1943 Warner Bros. cartoon in the Merrie Melodies series, directed by Friz Freleng and starring Bugs Bunny. Voices are provided by Mel Blanc. This is one of only two cartoons where Elmer's speech impediment is referenced in the title, the other one is Wackiki Wabbit. It is a parody of the classic short story "Jack and the Beanstalk". It should not be confused with another parody of this story starring Bugs, Daffy and Elmer, namely the 1955 short Beanstalk Bunny.

Beanstalk Bunny is a Warner Bros. Merrie Melodies cartoon released on 12 February 1955. The cartoon's story is derived from the classic fairy tale Jack and the Beanstalk and stars Bugs Bunny, Daffy Duck as Jack, and Elmer Fudd as the giant. The cartoon was directed by Chuck Jones.

Jack the Giant Killer is a 1962 heroic fantasy adventure film starring Kerwin Mathews in a fairy tale story about a young man who defends a princess against a sorcerer's giants and demons.

Jack and the Beanstalk: The Real Story is a 2001 American television miniseries. It was directed by Brian Henson and was a co-production of Hallmark Entertainment and The Jim Henson Company. It is based on the classic English fairy tale Jack and the Beanstalk. The story was considerably reworked to reflect what Henson believed to be a more ethical, humanist view. The cast includes Matthew Modine, Mia Sara, Jon Voight, and Vanessa Redgrave. Richard Attenborough, Daryl Hannah, and a young James Corden play giants.

Woody the Giant Killer is the 25th animated cartoon short subject in the Woody Woodpecker series. Released theatrically on December 15, 1947, the film was produced by Walter Lantz Productions and distributed by Universal Pictures. The film is a parody of the tale "Jack and the Beanstalk".

Cormoran is a giant associated with St. Michael's Mount in the folklore of Cornwall. Local tradition credits him with creating the island, in some versions with the aid of his wife Cormelian, and using it as a base to raid cattle from the mainland communities. Cormoran appears in the English fairy tale "Jack the Giant Killer" as the first giant slain by the hero, Jack, and in tales of "Tom the Tinkeard" as a giant too old to present a serious threat. 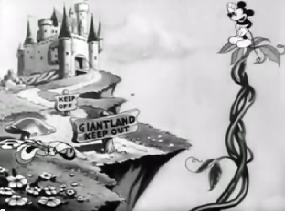 Giantland is a 1933 animated short film produced by Walt Disney Productions and distributed by United Artists. The film is an adaptation of the fairy tale "Jack and the Beanstalk" with Mickey Mouse in the title role. Mickey is voiced by Walt Disney and Mickey's nephews are voiced by Marcellite Garner, who at the time usually voiced Minnie Mouse.

Jack the Giant Slayer is a 2013 American fantasy adventure film directed and co-produced by Bryan Singer and written by Darren Lemke, Christopher McQuarrie and Dan Studney, from a story by Lemke and David Dobkin. The film, based on the British fairy tales "Jack the Giant Killer" and "Jack and the Beanstalk", stars Nicholas Hoult, Eleanor Tomlinson, Stanley Tucci, Ian McShane, Bill Nighy, and Ewan McGregor. The film tells the story of Jack, a young farmhand who must rescue a princess from a race of giants after inadvertently opening a gateway to their land in the sky.

Jack the Giantkiller is a 1982 arcade game developed and published by Cinematronics. It is based on the 19th-century English fairy tale Jack and the Beanstalk. In Japan, the game was released as Treasure Hunt. There were no home ports. 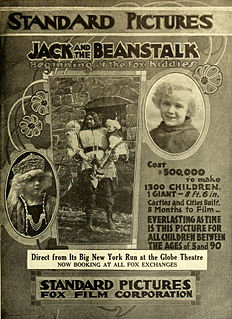