Jack and the Beanstalk

Last updated September 22, 2022
English folktale closely associated with the tale of "Jack the Giant-killer"
This article is about the fairy tale. For other uses, see Jack and the Beanstalk (disambiguation). For the hero, see Jack (hero).

"Jack and the Beanstalk" is an English fairy tale. It appeared as "The Story of Jack Spriggins and the Enchanted Bean" in 1734 [1] and as Benjamin Tabart's moralized "The History of Jack and the Bean-Stalk" in 1807. [2] Henry Cole, publishing under pen name Felix Summerly, popularized the tale in The Home Treasury (1845), [3] and Joseph Jacobs rewrote it in English Fairy Tales (1890). [4] Jacobs' version is most commonly reprinted today, and is believed to be closer to the oral versions than Tabart's because it lacks the moralizing. [5]

"Jack and the Beanstalk" is the best known of the "Jack tales", a series of stories featuring the archetypal Cornish and English hero and stock character Jack. [6]

According to researchers at Durham University and Universidade Nova de Lisboa, the story originated more than five millennia ago, based on a wide-spread archaic story form which is now classified by folklorists as ATU 328 The Boy Who Stole Ogre's Treasure. [7]

Jack, a poor country boy, trades the family cow for a handful of magic beans, which grow into a massive, towering beanstalk reaching up into the clouds. Jack climbs the beanstalk and finds himself in the castle of an unfriendly giant. The giant senses Jack's presence and cries,

Fee-fi-fo-fum! I smell the blood of an Englishman. Be he alive, or be he dead, I'll grind his bones to make my bread. [8]

Outwitting the giant, Jack is able to retrieve many goods once stolen from his family, including a bag of gold, an enchanted goose that lays golden eggs and a magic golden harp that plays and sings by itself. Jack then escapes by chopping down the beanstalk. The giant, who is pursuing him, falls to his death, and Jack and his family prosper.

"The Story of Jack Spriggins and the Enchanted Bean" was published in London by J. Roberts in the 1734 second edition of Round About Our Coal-Fire. [1] In 1807, English writer Benjamin Tabart published The History of Jack and the Bean Stalk, possibly actually edited by William and/or Mary Jane Godwin. [9]

The story is older than these accounts. According to researchers at Durham University and the Universidade Nova de Lisboa, the tale type (AT 328, The Boy Steals Ogre's Treasure) to which the Jack story belongs may have had a Proto-Indo-European language (PIE) origin (the same tale also has Proto-Indo-Iranian variants), [10] and so some think that the story would have originated millennia ago (4500 BC to 2500 BC). [7]

In some versions of the tale, the giant is unnamed, but many plays based on it name him Blunderbore (one giant of that name appears in the 18th-century tale "Jack the Giant Killer"). In "The Story of Jack Spriggins" the giant is named Gogmagog. [11]

"Jack and the Beanstalk" is an Aarne-Thompson tale-type 328, The Treasures of the Giant, which includes the Italian "Thirteenth" and the French "How the Dragon Was Tricked" tales. Christine Goldberg argues that the Aarne-Thompson system is inadequate for the tale because the others do not include the beanstalk, which has analogies in other types [13] [14]

The Brothers Grimm drew an analogy between this tale and a German fairy tale, "The Devil With the Three Golden Hairs". The devil's mother or grandmother acts much like the giant's wife, a female figure protecting the child from the evil male figure. [15]

"Jack and the Beanstalk" is unusual in some versions in that the hero, although grown up, does not marry at the end but returns to his mother. In other versions he is said to have married a princess. This is found in few other tales, such as some variants of "Vasilisa the Beautiful". [16]

The original story portrays a "hero" gaining the sympathy of a man's wife, hiding in his house, robbing him, and finally killing him. In Tabart's moralized version, a fairy woman explains to Jack that the giant had robbed and murdered his father justifying Jack's actions as retribution [17] (Andrew Lang follows this version in the Red Fairy Book of 1890).

Jacobs gave no justification because there was none in the version he had heard as a child and maintained that children know that robbery and murder are wrong without being told in a fairy tale, but did give a subtle retributive tone to it by making reference to the giant's previous meals of stolen oxen and young children. [18]

Many modern interpretations have followed Tabart and made the giant a villain, terrorizing smaller folk and stealing from them, so that Jack becomes a legitimate protagonist. For example, the 1952 film starring Abbott and Costello the giant is blamed for poverty at the foot of the beanstalk, as he has been stealing food and wealth and the hen that lays golden eggs originally belonged to Jack's family. In other versions, it is implied that the giant had stolen both the hen and the harp from Jack's father. Brian Henson's 2001 TV miniseries Jack and the Beanstalk: The Real Story not only abandons Tabart's additions but vilifies Jack, reflecting Jim Henson's disgust at Jack's unscrupulous actions. [19] 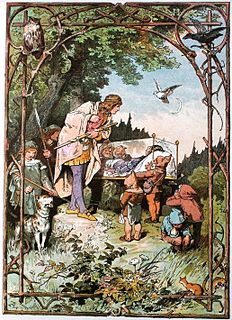 "Snow White and the Seven Dwarfs" is a 19th-century German fairy tale that is today known widely across the Western world. The Brothers Grimm published it in 1812 in the first edition of their collection Grimms' Fairy Tales and numbered as Tale 53. The original German title was Sneewittchen, a Low German form, but the first version gave the High German translation Schneeweißchen, and the tale has become known in German by the mixed form Schneewittchen. The Grimms completed their final revision of the story in 1854. 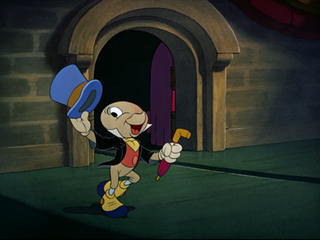 Jiminy Cricket is the Disney version of the "Talking Cricket", a fictional character created by Italian writer Carlo Collodi for his 1883 children's book The Adventures of Pinocchio, which Walt Disney adapted into the animated film Pinocchio in 1940. Originally an unnamed, minor character in Collodi's novel who is killed by Pinocchio before returning as a ghost, he was transformed for the Disney adaptation into a comical and wisecracking partner who accompanies Pinocchio on his adventures, having been appointed by the Blue Fairy to serve as Pinocchio's official conscience. In the film, he sings "When You Wish Upon a Star", the Walt Disney Company's signature song. 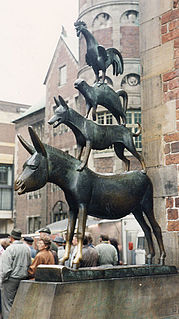 The "Town Musicians of Bremen" is a German fairy tale collected by the Brothers Grimm and published in Grimms' Fairy Tales in 1819. 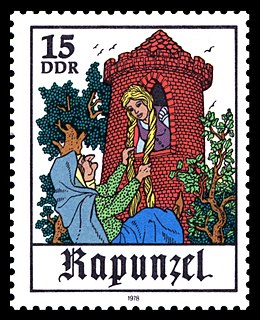 Rapunzel is a German fairy tale recorded by the Brothers Grimm and first published in 1812 as part of Children's and Household Tales. The Brothers Grimm's story developed from the French literary fairy tale of Persinette by Charlotte-Rose de Caumont de La Force (1698).

The Laugh-O-Gram Studio was a short-lived film studio located on the second floor of the McConahay Building at 1127 East 31st in Kansas City, Missouri that operated from June 1921 to 1923. 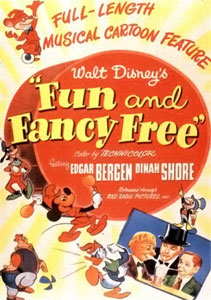 Fun and Fancy Free is a 1947 American animated musical fantasy package film produced by Walt Disney and released on September 27, 1947 by RKO Radio Pictures. It is the ninth Disney animated feature film and the fourth of the package films that the studio produced in the 1940s to save money during World War II. The Disney package films of the late 1940s helped finance Cinderella (1950) and subsequent others such as Alice in Wonderland (1951) and Peter Pan (1953).

Weetabix is a breakfast cereal produced by Weetabix Limited in the United Kingdom. It comes in the form of palm-sized wheat biscuits. Variants include organic and Weetabix Crispy Minis (bite-sized) versions. The UK cereal is manufactured in Burton Latimer, Northamptonshire, and exported to over 80 countries. Weetabix for Canada and the United States is manufactured in Cobourg, Ontario, in both organic and conventional versions. 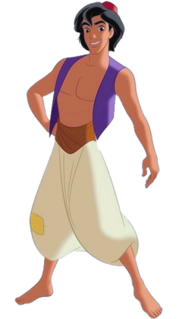 Aladdin is a fictional character and the titular protagonist of Walt Disney Pictures' 31st animated feature of the same name based on Aladdin, a folk tale of Middle Eastern origin. He is voiced by American actor Scott Weinger, while his singing voice is provided by Brad Kane. He also stars in the two direct-to-video sequels The Return of Jafar (1994) and Aladdin and the King of Thieves (1996), as well as the animated television series based on the film. Mena Massoud played a live-action version of the character in a live action adaptation of the 1992 film.

"Fee-fi-fo-fum" is the first line of a historical quatrain famous for its use in the classic English fairy tale "Jack and the Beanstalk". The poem, as given in Joseph Jacobs' 1890 rendition, is as follows:

Pinocchio is a fictional character and the protagonist of the children's novel The Adventures of Pinocchio (1883) by Italian writer Carlo Collodi of Florence, Tuscany. Pinocchio was carved by a woodcarver named Geppetto in a Tuscan village. He was created as a wooden puppet but he dreams of becoming a real boy. He is known for his long nose, which grows when he lies. 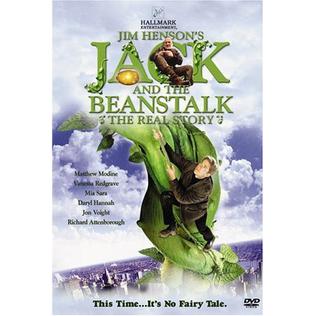 Jack and the Beanstalk: The Real Story is a 2001 American television miniseries. It was directed by Brian Henson and was a co-production of Hallmark Entertainment and The Jim Henson Company. It is based on the classic English fairy tale "Jack and the Beanstalk". The story was considerably reworked to reflect what Henson believed to be a more ethical, humanist view. The cast includes Matthew Modine, Mia Sara, Jon Voight, and Vanessa Redgrave. Richard Attenborough, Daryl Hannah, and James Corden play giants.

"Jack the Giant Killer" is an English fairy tale.

Giantland is a 1933 animated short film produced by Walt Disney Productions and distributed by United Artists. The film is an adaptation of the fairy tale "Jack and the Beanstalk" with Mickey Mouse in the title role. Mickey is voiced by Walt Disney and Mickey's nephews are voiced by Marcellite Garner, who at the time usually voiced Minnie Mouse. It was the 62nd Mickey Mouse short film, and the twelfth of that year. 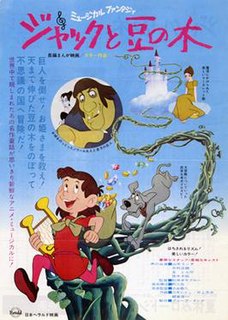 Jack and the Beanstalk is a 1902 American silent short film directed by George S. Fleming and Edwin S. Porter.

"Tallahassee" is the sixth episode of the second season of the American ABC fantasy/drama television series Once Upon a Time, and the show's 28th episode overall, which aired on November 4, 2012.

"Grimm Job" is the tenth episode of the twelfth season of the animated comedy series Family Guy and the 220th episode overall. It originally aired on Fox in the United States and Canada on January 12, 2014, and was directed by Joe Vaux and written by Alec Sulkin.

Nathan Greno is an American film director, story artist, and writer best known as the co-director of the 2010 animated film Tangled.

Jack and the Beanstalk is a 1967 live-action/animated-hybrid musical-themed telefilm that was produced and directed by and starred Gene Kelly. It was executive produced by William Hanna and Joseph Barbera. It is a retelling of the popular fairy tale that mixes both live action and animation. The film premiered on NBC on February 26, 1967.

Wikisource has original text related to this article:
Jack and the Beanstalk

Wikimedia Commons has media related to Jack and the Beanstalk .
This page is based on this Wikipedia article
Text is available under the CC BY-SA 4.0 license; additional terms may apply.
Images, videos and audio are available under their respective licenses.