AWS Elastic Beanstalk is an orchestration service offered by Amazon Web Services for deploying applications which orchestrates various AWS services, including EC2, S3, Simple Notification Service (SNS), CloudWatch, autoscaling, and Elastic Load Balancers. [2] Elastic Beanstalk provides an additional layer of abstraction over the bare server and OS; users instead see a pre-built combination of OS and platform, such as "64bit Amazon Linux 2014.03 v1.1.0 running Ruby 2.0 (Puma)" or "64bit Debian jessie v2.0.7 running Python 3.4 (Preconfigured - Docker)". [3] Deployment requires a number of components to be defined: an 'application' as a logical container for the project, a 'version' which is a deployable build of the application executable, a 'configuration template' that contains configuration information for both the Beanstalk environment and for the product. Finally an 'environment' combines a 'version' with a 'configuration' and deploys them. [3] Executables themselves are uploaded as archive files to S3 beforehand and the 'version' is just a pointer to this. [3]

The name "Elastic beanstalk" is a reference to the beanstalk that grew all the way up to the clouds in the fairy tale Jack and the Beanstalk.

Supported applications and software stacks include [4] :

WebSphere Application Server (WAS) is a software product that performs the role of a web application server. More specifically, it is a software framework and middleware that hosts Java-based web applications. It is the flagship product within IBM's WebSphere software suite. It was initially created by Donald F. Ferguson, who later became CTO of Software for Dell. The first version was launched in 1998. This project was an offshoot from IBM HTTP Server team starting with Domino Go. 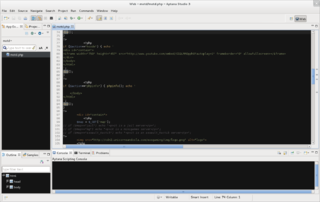 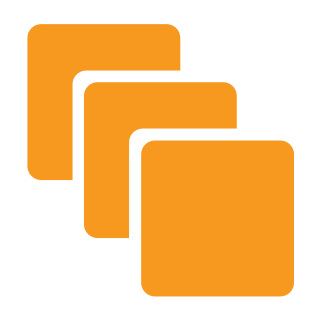 Amazon Elastic Compute Cloud (EC2) forms a central part of Amazon.com's cloud-computing platform, Amazon Web Services (AWS), by allowing users to rent virtual computers on which to run their own computer applications. EC2 encourages scalable deployment of applications by providing a web service through which a user can boot an Amazon Machine Image (AMI) to configure a virtual machine, which Amazon calls an "instance", containing any software desired. A user can create, launch, and terminate server-instances as needed, paying by the second for active servers – hence the term "elastic". EC2 provides users with control over the geographical location of instances that allows for latency optimization and high levels of redundancy.

Google App Engine is a Platform as a Service and cloud computing platform for developing and hosting web applications in Google-managed data centers. Applications are sandboxed and run across multiple servers. App Engine offers automatic scaling for web applications—as the number of requests increases for an application, App Engine automatically allocates more resources for the web application to handle the additional demand.

The TurnKey Linux Virtual Appliance Library is a free open source project which has developed a range of Debian-based pre-packaged server software appliances. Turnkey appliances can be deployed as a virtual machine, in cloud computing infrastructures or installed in physical computers. 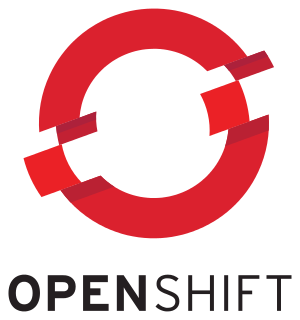 OpenShift is a family of containerization software developed by Red Hat. Its flagship product is the OpenShift Container Platform—an on-premises platform as a service built around Docker containers orchestrated and managed by Kubernetes on a foundation of Red Hat Enterprise Linux. The family's other products provide this platform through different environments: OKD serves as the community-driven upstream, OpenShift Online is the platform offered as software as a service, and Openshift Dedicated is the platform offered as a managed service. 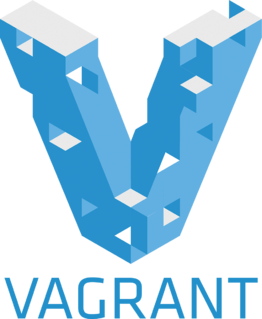 Vagrant is an open-source software product for building and maintaining portable virtual software development environments, e.g. for VirtualBox, KVM, Hyper-V, Docker containers, VMware, and AWS. It tries to simplify the software configuration management of virtualizations in order to increase development productivity. Vagrant is written in the Ruby language, but its ecosystem supports development in a few languages.

Puppet is a privately held information technology (IT) automation software company based in Portland, Oregon.

Docker is a set of platform as a service (PaaS) products that uses OS-level virtualization to deliver software in packages called containers. Containers are isolated from one another and bundle their own software, libraries and configuration files; they can communicate with each other through well-defined channels. All containers are run by a single operating-system kernel and are thus more lightweight than virtual machines.

IBM Bluemix, rebranded IBM Cloud in 2017, is a cloud Platform as a service (PaaS) developed by IBM. It supports several programming languages and services as well as integrated DevOps to build, run, deploy and manage applications on the cloud. Bluemix is based on Cloud Foundry open technology and runs on SoftLayer infrastructure.

BOSH is an open-source software project that offers a toolchain for release engineering, software deployment and application lifecycle management of large-scale distributed services. The toolchain is made up of a server and a command line tool. BOSH is typically used to package, deploy and manage cloud software. While BOSH was initially developed by VMware in 2010 to deploy Cloud Foundry PaaS, it can be used to deploy other software. BOSH is designed to manage the whole lifecycle of large distributed systems.

Infrastructure as code (IaC) is the process of managing and provisioning computer data centers through machine-readable definition files, rather than physical hardware configuration or interactive configuration tools. The IT infrastructure managed by this comprises both physical equipment such as bare-metal servers as well as virtual machines and associated configuration resources. The definitions may be in a version control system. It can use either scripts or declarative definitions, rather than manual processes, but the term is more often used to promote declarative approaches.

Buddy is a web-based and self-hosted continuous integration and delivery software for Git developers that can be used to build, test and deploy web sites and applications with code from GitHub, Bitbucket and GitLab. It employs Docker containers with pre-installed languages and frameworks for builds, alongside DevOps, monitoring and notification actions.

Amazon Elastic File System is a cloud storage service provided by Amazon Web Services (AWS) designed to provide scalable, elastic, concurrent with some restrictions, and encrypted file storage for use with both AWS cloud services and on-premises resources. Amazon EFS is built to be able to grow and shrink automatically as files are added and removed. Amazon EFS supports Network File System (NFS) versions 4.0 and 4.1 (NFSv4) protocol, and control access to files through Portable Operating System Interface (POSIX) permissions.