Alexa was founded as an independent company in 1996 and acquired by Amazon in 1999 for $250M in stock. Its toolbar collects data on Internet browsing behavior and transmits them to the Alexa website, where they are stored and analyzed. This is the basis for the company's web traffic reporting, including its Alexa Rank. [4] According to its website, Alexa provides web traffic data, global rankings, and other information on 30 million websites. [5] As of 2018, its website is visited by over 3 million people every month.

Alexa Internet was founded in April 1996 by Brewster Kahle and Bruce Gilliat. [6] The company's name was chosen in homage to the Library of Alexandria of Ptolemaic Egypt, drawing a parallel between the largest repository of knowledge in the ancient world and the potential of the Internet to become a similar store of knowledge. [7] Alexa initially offered a toolbar that gave Internet users suggestions on where to go next, based on the traffic patterns of its user community. The company also offered context for each site visited: to whom it was registered, how many pages it had, how many other sites pointed to it, and how frequently it was updated. [8]

Alexa's operations grew to include archiving of web pages as they are "crawled" and examined by an automated computer program (nicknamed a "bot" or "web crawler"). This database served as the basis for the creation of the Internet Archive accessible through the Wayback Machine. [9] In 1998, the company donated a copy of the archive, two terabytes in size, to the Library of Congress. [7] Alexa continues to supply the Internet Archive with Web crawls. In 1999, as the company moved away from its original vision of providing an "intelligent" search engine, Alexa was acquired by Amazon.com for approximately US$250 million in Amazon stock. [10]

Alexa began a partnership with Google in early 2002, and with the web directory DMOZ in January 2003. [11] In December 2005, Alexa opened its extensive search index and Web-crawling facilities to third-party programs through a comprehensive set of Web services and APIs. These could be used, for instance, to construct vertical search engines that could run on Alexa's servers or elsewhere. In May 2006, Google was replaced with Windows Live Search as a provider of search results. [12] In December 2006, Amazon released Alexa Image Search. Built in-house, it was the first major application built on the company's Web platform. In May 2007, Alexa changed their API to limit comparisons to three websites, reduce the size of embedded graphs in Flash, and add mandatory embedded BritePic advertisements.

In April 2007, the company filed a lawsuit, Alexa v. Hornbaker, to stop trademark infringement by the Statsaholic service. [13] In the lawsuit, Alexa alleged that Ron Hornbaker was stealing traffic graphs for profit, and that the primary purpose of his site was to display graphs that were generated by Alexa's servers. [14] Hornbaker removed the term "Alexa" from his service name on March 19, 2007. [15] On November 27, 2008, Amazon announced that Alexa Web Search was no longer accepting new customers, and that the service would be deprecated or discontinued for existing customers on January 26, 2009. [16] Thereafter, Alexa became a purely analytics-focused company.

A key metric published from Alexa Internet analytics is the Alexa Traffic Rank also simply known as Alexa Rank. It is also referred to as Global Rank by Alexa Internet and is designed to be an estimate of a website's popularity. As of May 2018 [update] , Alexa Internet's tooltip for Global Rank says the rank is calculated from a combination of daily visitors and page views on a website over a 3-month period. [19]

Alexa used to rank sites based primarily on tracking a sample set of Internet traffic—users of its toolbar for the Internet Explorer, Firefox and Google Chrome web browsers. [21] [22] The Alexa Toolbar includes a popup blocker (which stops unwanted ads), a search box, links to Amazon.com and the Alexa homepage, and the Alexa ranking of the website that the user is visiting. It also allows the user to rate the website and view links to external, relevant websites. In early 2005, Alexa stated that there had been 10 million downloads of the toolbar, though the company did not provide statistics about active usage. Originally, web pages were only ranked amongst users who had the Alexa Toolbar installed, and could be biased if a specific audience subgroup was reluctant to take part in the rankings. This caused some controversies over how representative Alexa's user base was of typical Internet behavior, [23] especially for less-visited sites. [22] In 2007, Michael Arrington provided examples of Alexa rankings known to contradict data from the comScore web analytics service, including ranking YouTube ahead of Google. [24]

Until 2007, a third-party-supplied plugin for the Firefox browser [25] served as the only option for Firefox users after Amazon abandoned its A9 toolbar. [26] On July 16, 2007, Alexa released an official toolbar for Firefox called Sparky. [27] On 16 April 2008, many users reported drastic shifts in their Alexa rankings. Alexa confirmed this later in the day with an announcement that they had released an updated ranking system, claiming that they would now take into account more sources of data "beyond Alexa Toolbar users". [28] [29]

Using the Alexa Pro service, website owners can sign up for "certified statistics", which allows Alexa more access to a website's traffic data. [30] Site owners input JavaScript code on each page of their website that, if permitted by the user's security and privacy settings, runs and sends traffic data to Alexa, allowing Alexa to display—or not display, depending on the owner's preference—more accurate statistics such as total pageviews and unique pageviews.

A number of antivirus companies have assessed Alexa's toolbar. The toolbar for Internet Explorer 7 was at one point flagged as malware by Microsoft Defender. [31] Symantec classified the toolbar as "trackware" in 2007. [32] McAfee classified it as adware, deeming it a "potentially unwanted program" in 2005 [33] but McAfee Site Advisor rated the Alexa site "green" in 2007, finding "no significant problems", but warned of a "small fraction of downloads ... that some people consider adware or other potentially unwanted programs." [34] As of 2014, though it is possible to delete a paid subscription within an Alexa account, it is not possible to delete an account that is created at Alexa through any web interface. [35]

Affiliate marketing is a type of performance-based marketing in which a business rewards one or more affiliates for each visitor or customer brought by the affiliate's own marketing efforts.

AVG AntiVirus is a line of antivirus software developed by AVG Technologies, a subsidiary of Avast. It is available for Windows, macOS and Android. 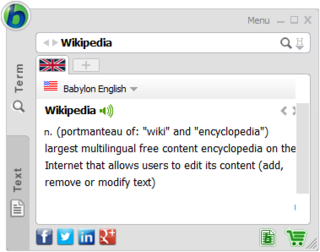 Babylon is a computer dictionary and translation program developed by the Israeli company Babylon Software Ltd. based in the city of Or Yehuda. The company was established in 1997 by the Israeli entrepreneur Amnon Ovadia. Its IPO took place ten years later. It is considered a part of Israel's Download Valley, a cluster of software companies monetizing "free" software downloads through adware. Babylon includes in-house proprietary dictionaries, as well as community-created dictionaries and glossaries. It is a tool used for translation and conversion of currencies, measurements and time, and for obtaining other contextual information. The program also uses a text-to-speech agent, so users hear the proper pronunciation of words and text. Babylon has developed 36 English-based proprietary dictionaries in 21 languages. In 2008–2009, Babylon reported earnings of 50 million NIS through its collaboration with Google.

Yahoo! Toolbar is a browser plugin. It is available for Internet Explorer, Firefox and Google Chrome browsers.

Compete.com was a web traffic analysis service. The company was founded in 2000 and ceased operations in December 2016.

Blekko, trademarked as blekko (lowercase), was a company that provided a web search engine with the stated goal of providing better search results than those offered by Google Search, with results gathered from a set of 3 billion trusted webpages and excluding such sites as content farms. The company's site, launched to the public on November 1, 2010, used slashtags to provide results for common searches. Blekko also offered a downloadable search bar. It was acquired by IBM in March 2015, and the service was discontinued.

The Conduit toolbar was an online platform that allowed web publishers to create custom toolbars, web apps, and mobile apps at no cost. It was developed by Conduit Inc. but demerged to Perion Network. Conduit had approximately 260,000 registered publishers who have collectively created content downloaded by more than 250 million end users. Web apps and pieces of content developed through Conduit's platform can be distributed and exchanged online via the Conduit App Marketplace. Currently, 60 million users consume apps from the marketplace on a daily basis.

A number of metrics are available to marketers interested in search engine optimization. Search engines and software creating such metrics all use their own crawled data to derive at a numeric conclusion on a website's organic search potential. Since these metrics can be manipulated, they can never be completely reliable for accurate and truthful results.

SEMrush is a software as a service (SaaS) company based in Boston that sells online visibility and marketing analytics software subscriptions. It was founded by Oleg Shchegolev and Dmitry Melnikov as a SEO tool and a browser extension before adopting the SaaS model. The software can provide intelligence data including website traffic information, keywords, projected AdWords spend, site audits, topic research, lead generation, and other SEO-related data.