MX Player is an Indian video streaming and video on demand platform developed by MX Media & Entertainment (formerly J2 Interactive [1] [2] ). It has over 280 million users globally. [3] [4] The platform currently operates on an ad-supported model and has a streaming library of over 150,000 hours across 12 languages including English, Hindi and Tamil. It is available on iOS, Android and the web.

On 20 February 2019, MX Player was relaunched as an OTT platform with original programming. It has also licensed contents from various Indian and International studios including FilmRise, Sonar Entertainment, Screen Media Films, Goldmine, Hungama, Shemaroo, Paramount Pictures, Sony Entertainment and Sun TV Network. [8] [9] In 2020, it tied up with Ullu App for adult content. [10]

Initially available in India, in March 2020, MX Player announced the launch of its OTT service internationally to select markets, including the United States, United Kingdom, Canada, Australia, New Zealand, Pakistan, Bangladesh and Nepal. [11] Elsewhere, it is still a video player.

Tencent Holdings Ltd., also known as Tencent, is a Chinese multinational technology conglomerate holding company. Founded in 1998, its subsidiaries globally market various Internet-related services and products, including in entertainment, artificial intelligence, and other technology. Its twin-skyscraper headquarters, Tencent Seafront Towers are based in the Nanshan District of Shenzhen.

Plex is a global streaming media service and a client–server media player platform, made by Plex, Inc. The Plex Media Server organizes video, audio, and photos from a user's collections and from online services, and streams it to the players. The official clients and unofficial third-party clients run on mobile devices, smart TVs, streaming boxes, and in web apps.

Spotify is a Swedish audio streaming and media services provider founded on 23 April 2006 by Daniel Ek and Martin Lorentzon. It is the world's largest music streaming service provider, with over 365 million monthly active users, including 165 million paying subscribers, as of June 2021. Spotify is listed on the New York Stock Exchange in the form of American depositary receipts.

Flipkart is an Indian e-commerce company, headquartered in Bangalore, Karnataka, India, and incorporated in Singapore as a private limited company. The company initially focused on online book sales before expanding into other product categories such as consumer electronics, fashion, home essentials, groceries, and lifestyle products.

An over-the-top (OTT) media service is a media service offered directly to viewers via the Internet. OTT bypasses cable, broadcast, and satellite television platforms, the types of companies that traditionally act as controllers or distributors of such content. It has also been used to describe no-carrier cellphones, where all communications are charged as data, avoiding monopolistic competition, or apps for phones that transmit data in this manner, including both those that replace other call methods and those that update software.

Twitch is an American video live streaming service that focuses on video game live streaming, including broadcasts of esports competitions. In addition, it offers music broadcasts, creative content, and more recently, "in real life" streams. It is operated by Twitch Interactive, a subsidiary of Amazon.com, Inc. It was introduced in June 2011 as a spin-off of the general-interest streaming platform Justin.tv. Content on the site can be viewed either live or via video on demand.

The following is a list of on-demand music streaming services. These services offer streaming of full-length content via the Internet as a part of their service, without the listener necessarily having to purchase a file for download. This type of service is somewhat similar to Internet radio. Many of these sites have advertising and offer non-free options in the style of an online music store. For a list of online music stores that provide a means of purchasing and downloading music as files of some sort, see: Comparison of online music stores. Many sites from both of these categories, offer services similar to an online music database. 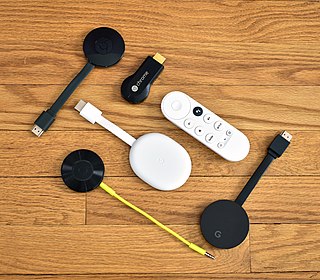 Chromecast is a line of digital media players developed by Google. The devices, designed as small dongles, can play Internet-streamed audio-visual content on a high-definition television or home audio system. The user controls playback with a mobile device or personal computer through mobile and web apps that support the Google Cast protocol, or by issuing commands via Google Assistant. Alternatively, content can be mirrored from the Google Chrome web browser on a personal computer or from the screen of some Android devices. 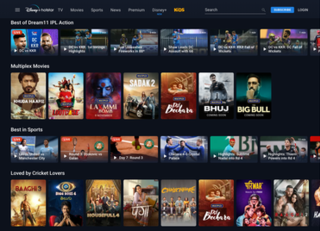 Hotstar is an Indian brand of subscription video on-demand over-the-top streaming service owned by Star India and operated by Disney Media and Entertainment Distribution, both a division of The Walt Disney Company. 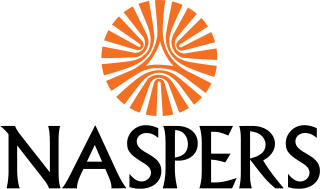 Naspers Limited is a South African multinational holding company headquartered in Cape Town, with interests in publishing, online retail and venture capital investing in the consumer internet sector. In May 2021 it was announced that Naspers' Dutch listed subsidiary Prosus would become the company's principal shareholder, owning up to 49.5% of its parent as part of a cross ownership structure.

ALTBalaji is an Indian subscription based video on demand platform which is a wholly owned subsidiary of Balaji Telefilms Ltd. Launched on 16 April 2017, ALTBalaji is the Group's foray into the digital entertainment sphere to create original OTT content. The platform has around 34 million paid users.

There are currently about 40 providers of over–the–top media services (OTT) in India, which distribute streaming media over the Internet. In fiscal year 2018, the OTT market in India was worth ₹2,150 crore, and its value grew to ₹35 billion in 2019.

ShareChat is an Indian social media and social networking service, developed by Bangalore-based Mohalla Tech Pvt Ltd. It was founded by Ankush Sachdeva, Bhanu Pratap Singh and Farid Ahsan, and incorporated on 8 January 2015. ShareChat has over 180 million monthly active users across 15 Indic languages. The company's application offers features that include private messaging, tagging and a personal messaging feature, enabling users to share videos, jokes, songs and other language based social content with other unknown users.

Krafton, formerly known as Bluehole is a South Korean company that develops and distributes video games based in Bundang-gu, Seongnam. Founded by Chang Byung-gyu in Seoul in March 2007, the company is known for having developed TERA (2011), PlayerUnknown Battlegrounds (2017) and PUBG: NEW STATE (2021), the latter 2 through its subsidiary company: PUBG Studios. In November 2018, Bluehole was reorganized under one brand: Krafton Game Union. According to Forbes, Chang has a net worth of $2.9 billion and is one of the seven gaming billionaires in South Korea.

Spoon is a social digital audio live streaming service. It is developed by Spoon Radio Inc., a South Korea-based company with a US office located in San Francisco, California. It allows users to listen to streamers and even start their own live streams using their smartphones and web, without any other equipment. It provides services in four languages, including South Korea, the United States, Japan, and Middle Eastern and North African regions.

Jio Platforms is an Indian technology company and a subsidiary of Reliance Industries, headquartered in Mumbai, India. Established in 2019, it acts as a holding company for India's largest mobile network operator Jio and other digital businesses of Reliance. It has made significant investments across its digital ecosystem, powered by leading technologies spanning broadband connectivity, smart devices, cloud and edge computing, big data analytics, artificial intelligence, Internet of Things, augmented and mixed reality and blockchain.