CDnow, Inc. was a dot-com company that operated an online shopping website selling compact discs and music-related products. In April 1998, during the dot-com bubble, the company was valued at over $1 billion. In July 2000, it was acquired by Bertelsmann Music Group for $117 million; shortly thereafter Amazon was contracted to operate the website. At its peak, it employed over 750 people and had offices in Fort Washington, Pennsylvania, New York City, London, and Los Angeles. [1]

CDnow was founded in February 1994 by twin brothers Jason Olim and Matthew Olim in their parents' basement in Ambler, Pennsylvania. [2] Initially launched as a Telnet service in August 1994, CDNow became a retail website in September 1994 using Valley Records Distributors as a drop-ship fulfillment center. [3] With three employees, the company moved near the Penllyn train station in Lower Gwynedd Township, Montgomery County, Pennsylvania and a couple years later it moved to the Strawbridge & Clothier building in Jenkintown, Pennsylvania. [1]

In 1997, the company had revenues of $18 million and in February 1998, with 100 employees, the company became a public company via an initial public offering. [4] CDNow then embarked on a large Internet advertising campaign, and was an innovator in preference-based retail recommendations, online video, the use of editorial content as a means to promote interest internet affiliate marketing programs, and email marketing. On March 17, 1999, CDNow acquired its largest competitor, another Philadelphia area company, N2K, whose online properties included Music Boulevard and Jazz Central Station [5] [6] In July 1999, the company announced a deal to merge with Columbia House, establishing a new public company jointly held by CDNow's shareholders, Time Warner and Sony. [7] [8]

CDNow was among the first of the Internet companies to show signs of struggle with the dot-com business model. On March 20, 2000, as the dot-com bubble burst, Barron's published a cover article called "Burning Up", which noted that the company was running out of cash. [9] [10] In March 2000, the Columbia House merger was called off. [11] In June 2000, the company closed its London office to cut costs. [12]

In July 2000, Bertelsmann Music Group acquired the company, intending to combine it with its BMG Direct record club as a new venture called BeMusic, and eventually add Napster to the service. Bertelsmann paid just $117 million, a price that was down over 90% from the valuation of the company at its peak in April 1998. The founding Olim brothers received a total of $17 million. [13] In April 2001, the company cut 40 employees, 10% of its staff. [14] In August 2001, the company closed its Japanese website and laid off 200 employees. [15]

In November 2002, Bertelsmann announced it would close CDnow's Fort Washington facility and lay off the company's remaining 33 employees. [16] Later that month, they signed a deal to outsource CDnow website operations to Amazon. [17] The new deal retained a revised version of the BMG Direct model called the "Preferred Buyers Club", offering a 20% discount for club-edition records; all other music was sold at standard Amazon prices. [17] In 2011, the CDnow.com URL was redirected to a maintenance notice [18] , and in 2013 it was permanently taken offline. 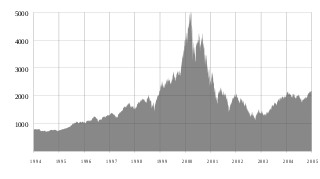 The dot-com bubble was a stock market bubble caused by excessive speculation in Internet-related companies in the late 1990s, a period of massive growth in the use and adoption of the Internet.

Napster is a set of three music-focused online services. It was founded in 1999 as a pioneering peer-to-peer (P2P) file sharing Internet software that emphasized sharing digital audio files, typically audio songs, encoded in MP3 format. As the software became popular, the company ran into legal difficulties over copyright infringement. It ceased operations and was eventually acquired by Roxio. In its second incarnation, Napster became an online music store until it was acquired by Rhapsody from Best Buy on December 1, 2011.

Amazon.com, Inc., is an American multinational conglomerate technology company based in Seattle, with 750,000 employees. It focuses on e-commerce, cloud computing, digital streaming, and artificial intelligence. It is considered one of the Big Four technology companies, along with Google, Apple, and Facebook. It has been referred to as "one of the most influential economic and cultural forces in the world." 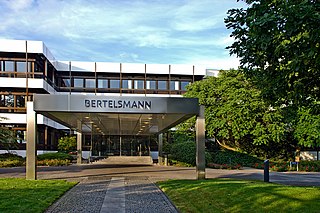 Bertelsmann is a German private multinational conglomerate based in Gütersloh, North Rhine-Westphalia, Germany. It is one of the world's largest media conglomerates and also active in the service sector and education.

Kozmo.com was a venture-capital-funded online company that promised free one-hour delivery of "videos, games, dvds, music, mags, books, food, basics & more" and Starbucks coffee in several major cities in the United States. It was founded by young investment bankers Joseph Park and Yong Kang in March 1998 in New York City, and was out of business by April 2001. The company is often referred to as an example of the dot-com bubble. On January 2013, the brand was bought by Yummy.com and announced that they would relaunch soon. On March 2018 Kozmo was relaunched as a warehouse club.

Arista Records, Inc. is an American record label owned by Sony Music, a subsidiary of Sony Corporation of America, the North American division of the Japanese conglomerate Sony. The label was previously handled by Bertelsmann Music Group. The label was founded in 1974 by Clive Davis. Along with Columbia Records, RCA Records and Epic Records, Arista is one of Sony Music's four flagship record labels.

Affiliate marketing is a type of performance-based marketing in which a business rewards one or more affiliates for each visitor or customer brought by the affiliate's own marketing efforts.

Terra Networks, S.A. is a Spanish Internet multinational company with headquarters in Spain and offices in Brazil, Chile, Colombia, Mexico, the United States and Peru. Part of Telefónica Group, Terra operates as a web portal or Internet access provider in the U.S., Spain, and 16 Latin American countries. Terra was publicly traded on NASDAQ under the symbol TRLY and on the Spanish stock market under the symbol TRR.

The Columbia House brand was introduced in the early 1970s by the Columbia Records division of CBS, Inc. as an umbrella for its mail-order music clubs, the primary incarnation of which was the Columbia Record Club, established in 1955. It had a significant market presence in the 1970s, 1980s and early 1990s. In 2005, longtime competitor BMG Direct Marketing, Inc. purchased Columbia House and consolidated operations. In 2008, the company was acquired by private investment group Najafi Companies, and its name was changed to Direct Brands, Inc.

Quack.com was an early voice portal company. The domain name later was used for Quack, an iPad search application from AOL.

Mark D. Persaud is an American businessman and lawyer. He was President of Qwest Records from 1997–1999 and owner and Chairman of Persaud Brothers, Inc. from 1999 to present, and has worked in investment banking, real estate, law, technology, e-commerce, talent management, music and filmed production, marketing and advertising.

Music Boulevard, or musicblvd.com, was a retail music information and sales website founded in 1995 by Telebase Systems. In 1997, the Music Boulevard website, operated by N2K, became among the first websites to offer piracy-protected music singles for direct download. The website used Liquid Audio's single-delivery system. Originally associated with Telebase Systems and its president Jim Coane, who was the CEO of the company, MusicBlvd went public in October 1997. The website offered more than 300,000 music titles and generated more than 80 million views in its first quarter.

The CDnow Story: Rags to Riches on the Internet by Jason Olim and Matthew Olim