Between 1995 and 2004, Georgantas recorded the first eight Thunderegg albums by himself to four-track cassette in various apartments in Brooklyn, New York, and his parents' house in Princeton, New Jersey. These albums, from 1995's Universal Nut through 2004's Sweetest One, display increasingly elaborate lo-fi (or "bedroom music" [2] ) arrangements, and reviewers have remarked on their high lyrical quality. [3] In January 2006, all of these recordings were collected for the anthology Open Book: The Collected Thunderegg, 1995–2004. The independently produced Open Book featured 231 mp3s on a single data CD along with a 108-page illustrated lyric book. It enjoyed a positive reception [4] both for its large scale [5] and its music, [6] which was likened to rock in the vein of Guided by Voices, [7] The Velvet Teen, [8] and The Mountain Goats. [9]

Thunderegg began playing and recording as a full band in 2000 after Fournier moved back east to Hartford, Connecticut, from Portland, Oregon. (The band was named after the thunderegg, the state rock of Oregon.) In 2002 a new full-band version of Georgantas's song "If I Went on a Diet" was selected for inclusion on a compilation CD produced by Jane magazine; [10] in 2005 that song and nine others would comprise Thunderegg's first full-band album, A Very Fine Sample of What's Available at the Mine. Thunderegg's second full-band album, Line Line, would be produced and mixed by Alan Weatherhead (Sparklehorse, Cracker) at Sound of Music Studios in Richmond, Virginia, and released independently in September 2011. [11] A follow-up with Weatherhead, C'mon Thunder, featuring Darren Jessee of Hotel Lights, was released on May 13, 2014, [12] to positive critical reception. [13] [14] [15] [16]

Throughout, Georgantas continued to record at home on a 424 Portastudio: [17] In 2005 he posted a new song every week [18] to Thunderegg's website, the best of which were collected for the CD This Week, which was self-released in early 2007. Several other albums followed, including Not What I Meant, Thunderegg's first San Francisco album, [19] which was recommended for fans of "The Eels, Ween, The Flaming Lips, and Pulp." [20] That album's closing track, "The Guest Star of the Rest Stop," was initially commissioned by author T Cooper for a CD accompanying his 2012 book Real Man Adventures. [21]

Thunderegg toured Germany in the summer of 2013 with a lineup that included Georgantas, Fournier, Moon, and Ken Matsuda (violin), [22] and Georgantas toured the United States (with KC Turner) in summer 2014. [23] In April 2015 the band released the seven-inch single "Ten Sleeves"/"Big Cigarette," again recorded with Weatherhead, this time with the California lineup at Tiny Telephone in San Francisco. [24]

With new drummer André Custodio, the band gelled in the Bay Area as a regularly gigging and touring four-piece band, complementing Georgantas's narrative lyrics with a sound described as "space bar rock" ("space rock, bar rock, space bar rock"). [25] In January 2017, they returned to the studio with Weatherhead, this time at Acoustic Noise in Oakland, to record their new LP, Cosmos. It was completed at Space Bomb Studios in Richmond, Virginia, and released on both black and deluxe color vinyl by Bleeding Gold Records on May 11, 2018. [26] 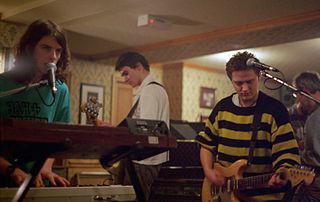 Gorky's Zygotic Mynci were a psychedelic folk and alternative rock band which formed in Carmarthen, Wales, in 1991. The group performed music in both Welsh and English, and had eight Top 75 singles on the UK Singles Chart during their career. They were prominent during the era known as Cool Cymru. The group disbanded in May 2006.

An album is a collection of audio recordings issued as a collection on compact disc (CD), vinyl, audio tape, or another medium. Albums of recorded sound were developed in the early 20th century as individual 78-rpm records collected in a bound book resembling a photograph album; this format evolved after 1948 into single vinyl LP records played at ​33 1⁄3 rpm. 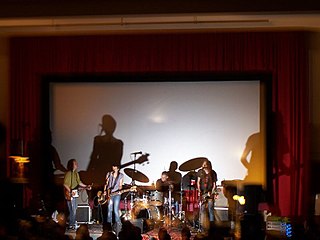 The Von Bondies were an American alternative rock band active from 1997 to 2011.

Grifters was a 1990s indie rock band based in Memphis who released albums on Doink, Sonic Noise, Shangri-La Records, and Sub Pop Records.

"Dave got the band going about eight and half years ago. He found Scott through a lot of tapes and just decided he wanted to work with this weirdo, basically..."

"Cigarettes & Alcohol" is a song by English rock band Oasis, written by Noel Gallagher. It was released on 10 October 1994 as the fourth single from their debut album Definitely Maybe (1994), and their second to enter the UK top ten in the United Kingdom, peaking at number 7, eventually spending 79 weeks on the charts. On 13 March 2020, 26 years after release, the song was certified Platinum, indicating 600,000 sales. 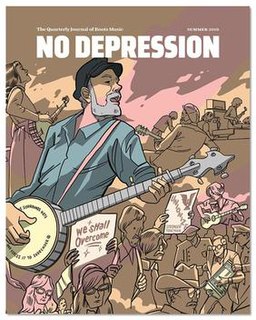 No Depression is a quarterly roots music journal with a concurrent online publication at nodepression.com. In print, No Depression is an ad-free publication focused on long-form music reporting and deep analysis that ties contemporary artists with the long chain of American roots music. In April 2020, No Depression introduced digital versions of their print journal. While the print journal remains ad-free, the digital versions include roots-music-related advertisements. Its journal contributors include roots music artists as well as professional critics and reporters, photographers, illustrators, and artists. 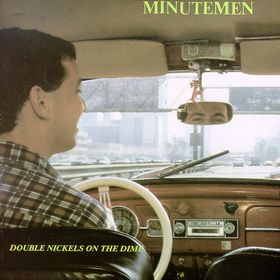 Double Nickels on the Dime is the third album by American punk trio Minutemen, released on the California independent record label SST Records in 1984. A double album containing 45 songs, Double Nickels on the Dime combines elements of punk rock, funk, country, spoken word and jazz, and references a variety of themes, from the Vietnam War and racism in America, to working-class experience and linguistics. 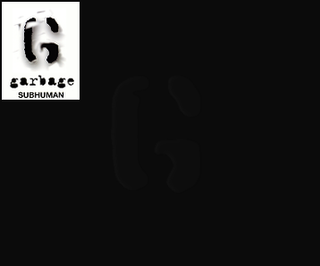 "Subhuman" is a 1995 song written, recorded and produced by alternative rock band Garbage, and was originally released as an international b-side on "Vow", Garbage's debut single. That song had earlier been pressed as a limited edition 7" vinyl in the United Kingdom for the purposes of launching the band; when it came to re-releasing "Vow", Mushroom Records felt that "Subhuman" was strong enough to be issued as an A-side to follow up "Vow". A last-minute decision was made to switch the songs. "Vow" was relegated to bonus track on the CD single. 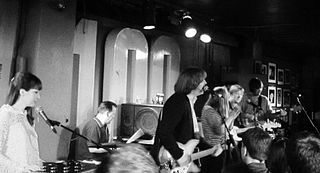 Comet Gain are a British indie pop band, formed by singer-songwriter and guitarist David Feck in 1992, with musical influences including post-punk and northern soul.

Mattin is an artist from Bilbao working mostly with noise and improvisation. Mattin also has written about improvisation, free software and against the notion of intellectual property. In 2001 Mattin formed Sakada with Eddie Prévost and Rosy Parlane. He has over 70 releases in different labels around the world. He runs the experimental record labels w.m.o/r and Free Software Series, and the netlabel Desetxea. Mattin publishes his music under the no-licence of Anti-copyright. With Anthony Iles, he has edited the book Noise & Capitalism. 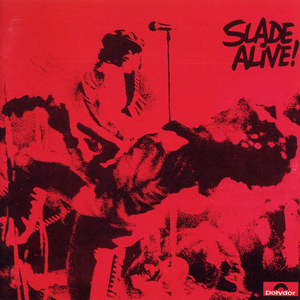 Slade Alive! is the first live album by the British rock band Slade. The album was released on 24 March 1972 and reached No. 2 on the UK Albums Chart, remaining in the chart for 58 weeks. It was Slade's first album to enter the UK charts and also the first to enter the Billboard 200 in the United States, where it reached No. 158. The album was produced by Chas Chandler. 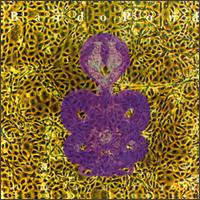 Amanita is the second studio album by American rock band Bardo Pond, released on April 3, 1996. It was released as a single CD and cassette on Matador Records, their first release on the label, and as a double vinyl LP on Drunken Fish Records with two bonus tracks. Counting their four early self-released cassettes, this is the band's sixth or seventh album, but is generally viewed as their third officially-released album.

Ed Alleyne-Johnson is a British electric violinist and prolific busker. He has been busking since he was a Fine Art student at Oxford University in the early 1980s. He uses an electric violin he carved with a kitchen knife, a custom pedalboard and portable amplifier. This setup has enabled him to perform on the street in almost every major city in Europe, and across the United States and Canada. 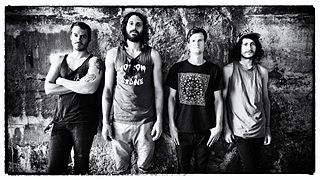 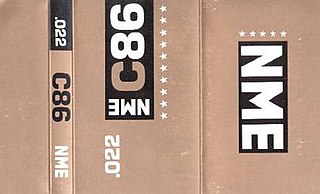