Thuraiyur is a village in the Arimalam revenue block of Pudukkottai district, [1] Tamil Nadu, India.

Arimalam block is a Revenue block in Pudukkottai district, Tamil Nadu, India. It has a total of 32 panchayat villages.

Revenue blocks, revenue circles or firka are the local revenue sub-divisions of the various districts of the states of India. These blocks should not be confused with the similar Panchayath union blocks (Blocks) and taluks. The revenue blocks exist to simplify local administration, and each consists of a small number of revenue villages, governed by a Revenue Inspector. The Revenue Inspector is charged with a number of key administrative roles, most notably the identification and collection of tax revenue. Sometimes the land area in a revenue circle is identified as an ILRC for administrative purposes. While Revenue blocks may be as large as or larger than a tehsil, revenue circles are generally smaller. In the state of Tamil Nadu alone, there are 1,127 revenue blocks. 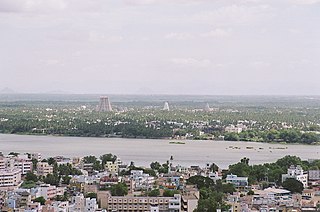 Sahibzada Ajit Singh Nagar district, also known as Ajitgarh district, or Mohali district is one of the twenty two districts of Punjab a state in north-west India. It was formed in April 2006 and is 18th district of Punjab, created next to Pathankot district. This district was carved out of areas falling in Ropar and Patiala District. It is situated next to the union territory of Chandigarh and Panchkula district of Haryana.

Manachanallur is a Town in Tiruchirappalli district in the Indian state of Tamil Nadu. 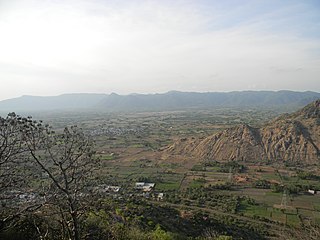 Kannanurpalayam, also known as Kannanur or simply K.Palayam, is a small village in Thuraiyur, Tiruchirapalli District, Tamil Nadu, India. It has a population of nearly 5,000 people.

Maruvathur is a village in Tiruchirappalli district, Thuraiyur block in the Indian state of Tamil Nadu.

Vazhoor is a town in Kottayam district in the state of Kerala, India.It is a village, panchayat and block with headquarters at Kodungoor on NH183. Basically an agrarian community inhabits this part, whose income depends on rubber cultivation

Peravurani taluk is a taluk in the Thanjavur district of Tamil Nadu, India. The headquarters is the town of Peravurani.

Chinsurah Mogra is a community development block that forms an administrative division in Chinsurah subdivision of Hooghly district in the Indian state of West Bengal.

Chanditala I is a community development block that forms an administrative division in Srirampore subdivision of Hooghly district in the Indian state of West Bengal.

Memari II is a community development block that forms an administrative division in Bardhaman Sadar South subdivision of Purba Bardhaman district in the Indian state of West Bengal.

Katwa II is a community development block that forms an administrative division in Katwa subdivision of Purba Bardhaman district in the Indian state of West Bengal.

Thirudesamalai, or Thiruthiyamalai, is a village in Tiruchirappalli District, Tamil Nadu, India. This village is located 15 km from Musiri,Tamil Nadu & 10 km from Thiruvellarai & 10 Km from Peramangalam,Tamil Nadu. The village is the site of a 5,000-year-old temple dedicated to Lord Shiva called Arulmigu Aega pushpa Priya Nathar & thayinum nallal Thirukovil.

Eragudi is a small town in Thuraiyur taluk in Tiruchirappalli district in the Indian state of Tamil Nadu. It was upgraded to small town from village on 28 May 1994.

Bheduasole is a medium sized Gram Panchayat and Village in Indpur Block in Bankura District of the Indian state of West Bengal. It is located in Burdwan Division. It is located 23 KM towards west from District head quarters Bankura and 187 KM from State capital Kolkata.