Thurman Munson Memorial Stadium is a stadium in Canton, Ohio, USA, primarily used for baseball. The facility is named after former Major League Baseball player Thurman Munson, who grew up in Canton. Munson was a New York Yankees catcher who was killed when his private plane was attempting to land at Akron-Canton Regional Airport in Summit County on August 2, 1979. Munson's number 15 is displayed on the center field wall.

It is the former home of the Canton–Akron Indians, the Double-A minor league affiliate of the Cleveland Indians, which played at the ballpark from 1989 to 1996. The team was renamed the Akron Aeros and moved into their new ballpark in downtown Akron in 1997. When they moved out, the ballpark became the home of the Canton Crocodiles, a team of the independent Frontier League, through 2001. In 2002, the Crocodiles left the stadium and it became the home ballpark of the Canton Coyotes, also of the Frontier League. After one season in Canton, the Coyotes moved to Columbia, Missouri and changed its name to the Mid-Missouri Mavericks.

The Frontier League is a professional independent baseball league with teams in the Northeast and Midwestern United States and Eastern Canada. It operates mostly in cities not served by Major League Baseball or Minor League Baseball teams and is not affiliated with either. The league was formed in 1993, and is the oldest currently running independent league in the United States. It is headquartered in Sauget, Illinois.

Canton is a city in and the county seat of Stark County, Ohio, United States. It is located approximately 60 miles (97 km) south of Cleveland and 20 miles (32 km) south of Akron in Northeast Ohio. The city lies on the edge of Ohio's extensive Amish country, particularly in Holmes and Wayne counties to the city's west and southwest. Canton is the largest municipality in the Canton-Massillon, OH Metropolitan Statistical Area, which includes all of Stark and Carroll counties. As of the 2010 Census, the population was 73,007, making Canton eighth among Ohio cities in population.

The Florence Y'alls are a professional baseball team based within the Greater Cincinnati region in the city of Florence, Kentucky. The Y'alls are a member of the West Division of the Frontier League, an independent baseball league. From the 2004 season to the present, the Y'alls have played their home games at UC Health Stadium, which is located near the Interstates 71 and 75. 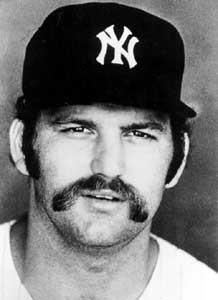 Thurman Lee Munson was an American professional baseball catcher who played 11 seasons in Major League Baseball (MLB) with the New York Yankees, from 1969 until his death in 1979. A seven-time All-Star, Munson had a career batting average of .292 with 113 home runs and 701 runs batted in (RBIs). Known for his outstanding fielding, he won the Gold Glove Award in three consecutive years (1973–75).

The Mid-Missouri Mavericks are a former minor league baseball team which played in Columbia, Missouri, in the United States. The team was a member of the independent Frontier League, and has no association with a Major League Baseball team. From 2003 through 2005 the team played at Taylor Stadium, the current home field of the baseball team of University of Missouri. The team suspended operations during the 2006 season in order to pursue financing and construction of a new stadium. The suspension of operations was subsequently extended through the 2007, 2008 and 2009 seasons after the bankruptcy of the principal owner, Bradley Wendt.

The region Northeast Ohio, in the US state of Ohio, in its most expansive usage contains six metropolitan areas along with eight micropolitan statistical areas. Most of the region is considered either part of the Cleveland–Akron–Canton, OH Combined Statistical Area and media market or the Youngstown–Warren, OH-PA Combined Statistical Area and media market. In total the region is home to 4,529,596 residents. Northeast Ohio also includes most of the area known historically as the Connecticut Western Reserve. In 2011, the Intelligent Community Forum ranked Northeast Ohio as a global Smart 21 Communities list. It has the highest concentration of Hungarian Americans in the United States.

Akron–Canton Airport is a commercial airport in the city of Green, in southern Summit County, Ohio, about 10 miles (16 km) southeast of Akron. It is jointly operated by Summit County and Stark County. The airport is a "reliever" airport for Northeast Ohio and markets itself as "A better way to go", emphasizing the ease of travel in comparison to Cleveland Hopkins International Airport. Over 75% of its traffic is general aviation. 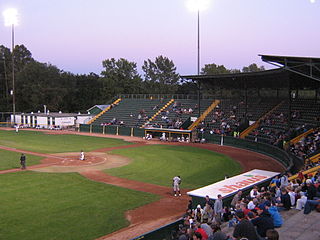 Centennial Field is the name of the baseball stadium at the University of Vermont in Burlington, Vermont and is the home of the Vermont Lake Monsters of the New York Penn League, the Short Season Class A affiliate of the Oakland Athletics.

Bowen Field at Peters Park is a stadium in Bluefield, Virginia, United States. Primarily used for baseball, it is the home field of the Bluefield Blue Jays minor league baseball team, and of the Bluefield College Rams baseball team. It was built in 1939 during the Great Depression as a WPA project, and it was rebuilt in 1975 after a fire. It holds 3,000 people. Seats are from the Anaheim Stadium and were installed in 1990s.

CarShield Field, formerly T.R. Hughes Ballpark, is a stadium in O'Fallon, Missouri. It is primarily used for baseball, and was the home field of the River City Rascals Frontier League baseball team, until the team ceased operations at the end of the 2019 season. Starting with the 2020 season, it will be the home field for the O'Fallon Hoots of the Prospect League. It also plays home to the local high school baseball team, The Christian- O'Fallon Eagles. It opened in 1999 with seating for 3,500 people, plus areas for 1,650 additional fans on lawn and outfield bleacher areas.

The Canton–Akron Indians are a defunct Minor League Baseball team. They played in the Eastern League at Thurman Munson Memorial Stadium in Canton, Ohio from 1989 to 1996. They were affiliated with the Cleveland Indians.

The Terry Park Ballfield is a historic site in Fort Myers, Florida, United States. The park is named after the family who donated the land in the 1920s. For years the stadium has hosted Major League Baseball spring training, as well as a dozen years of Florida State League baseball. The stadium has hosted the Philadelphia Athletics, Cleveland Indians, Pittsburgh Pirates, and Kansas City Royals spring training through the years. Terry Park was also home to some early minor league baseball, most notably the Fort Myers Palms and Fort Myers Royals, both belonging to the Florida State League. Hall of Famers Babe Ruth, Ty Cobb, Roberto Clemente, Jimmy Foxx, Bob Feller, Tris Speaker, and George Brett are some of the notable players that have played at Terry Park Field.

Wild Things Park is a 3,200-seat multi-purpose baseball stadium in North Franklin Township, a suburb of Washington, Pennsylvania. It hosted its first regular season baseball game on May 29, 2002, as the primary tenants of the facility, the Washington Wild Things, lost to the Canton Coyotes, 3-0. The ballpark also hosts the California University of Pennsylvania Vulcans baseball team. It was the home of the Pennsylvania Rebellion of the National Pro Fastpitch, a women's professional softball league, until 2017 when the team folded. It also hosts Trinity High School's baseball team and the WPIAL Baseball Championships. It was briefly the home of the Pittsburgh Riverhounds soccer club during the 2005 and 2006 seasons. Wild Things Park is located near Interstate 70 and is notable for including a hot tub in the viewing stands. ProGrass Synthetic Turf was installed in the fall of 2010.

The 1979 New York Yankees season was the 77th season for the franchise in New York and its 79th season overall. The season was marked by the death of their starting catcher, Thurman Munson, on August 2. The team finished with a record of 89-71, finishing fourth in the American League East, 13.5 games behind the Baltimore Orioles, ending the Yankees' three-year domination of the AL East. New York was managed by Billy Martin, and Bob Lemon. The Yankees played at Yankee Stadium. With the end of the Munson period within this season, a new era was about to unfold as this season would prove to be the first time ever for the Yankees to broadcast their games on cable within New York City and surrounding areas, the first ever MLB team to do so, starting Opening Day that year, all Yankees games save for the nationally aired games were broadcast on the then 3-year old cable channel SportsChannel NY aside from the usual WPIX telecast for free to air television viewers in the New York area and nationwide via satellite and cable.

The Vermont Mariners are a defunct minor league baseball team. They played in the Eastern League at Centennial Field in Burlington, Vermont in 1988. They were affiliated with the Seattle Mariners.