Thursday's Page are a five piece alternative rock outfit, who were formed in early 2005. The band, originally from the South West region, introduced their music to the Perth population in 2008, with plans to make an impact in the Western Australian music scene through 2009.

Drawing influences from other Aussie hard hitters such as The Butterfly Effect and Karnivool, Thursdays Page have crafted a unique sound through their hard work and dedication, which has now been captured on their current recordings.

Tracks from their first independent release received airplay on local and national radio. The title track "The Sweet Lullaby" was also included in a Triple J segment, cohering with the Busselton local youth events organisation. The band often performs in Perth venues and have supported larger national acts, including The Butterfly Effect, Head Filled Attraction and Bushido. [1]

Thursday's Page released their first official EP in May 2009, and are currently in pre-production for their next release, due out in Summer 09/10. [2]

The band originally formed as a heavy rock garage band placing Glen on guitar, Ryan on bass and vocals, with several other members. After its brief existence and dispersion, Glen and Ryan remained together and went on to recruit new members, forming Thursday's Page in early 2005 with Jake Hoskins on Vocals.

After playing regular shows throughout 2006 and 2007 the band came to a hiatus in November 2007 with the departure of long term bass player, Michael Ward. With tracking for their second studio release at this stage, the remaining members would continue to work on production, while searching for new members.

In 2008 Thursday's Page relocated to the city of Perth, to be closer to the music scene and expand their horizons. In doing so two new members were recruited. Ben Matthews would replace Michael Ward on Bass after his departure in 2007, and Phil Watts, who spent a short time with Glen and Ryan in a previous band, would return to take place on Keyboards and Backing vocals. [3]

On Friday, 29 May 2009, Thursdays Page released their first official debut EP, 'Beyond Paradise', through Firestarter Music; a Perth-based distribution and servicing company run by drummer of Birds of Tokyo, Adam Weston. A massive launch party was held at The Rocket Room, in Northbridge, beginning their West Coast EP tour, May–July 2009.

The Butterfly Effect are an Australian rock band from Brisbane formed in 1999. The band released a self-titled debut EP in 2001, and then three full-length albums afterwards; Begins Here in 2003, Imago in 2006, and Final Conversation of Kings in 2008. During this time, the band consisted of Clint Boge on lead vocals, Kurt Goedhart on guitar, Glenn Esmond on bass, and Ben Hall on drums. After struggling for years to work on a fourth studio album, Boge left the band in 2012 due to personal and creative differences. The remaining members recruited Brisbane-based singer Paul Galagher for a final single and tour before announcing their breakup in 2016. In July 2017, the band announced their reunion as well as a headlining tour scheduled to take place in March 2018.

Spencer Tracy were an Australian rock band formed in 1999 in Collie, Western Australia. Founding mainstay members are Lee Jones on lead vocals and guitar, his brother Kim Jones on bass guitar and Shaun Sibbes on drums. They were joined by Jessica Bennett (ex-Lash) on co-lead vocals and guitar in 2002. After she left in the following year, John Rabjones joined on guitar to record the group's self-titled, debut album. They issued three extended plays, Corner of My Eye, Daisy Daze (October) and Hold On.

The Preytells were an Australian indie rock band from Perth, formed in 2004 by Jessicca Bennett on lead guitar and backing vocals, Simon Okely on guitar and lead vocals, Jaclyn Pearson on drums and percussion and Cameron Stewart on bass guitar and backing vocals. Their sole album, Flood Songs/June Songs, was issued in September 2009; before they disbanded later that year. Their single, "Shout!", was nominated for WAM Song of the Year in the Pop category in 2008; while, "Lord Hold My Hand", was nominated for the same category in 2009.

Crawlspace are an Australian rock band from Perth which formed in 1998.

Calerway were a four-piece rock band from Perth, Western Australia. 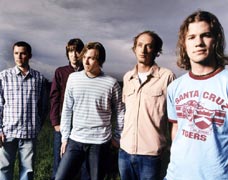 The Fergusons were a five piece alternative rock band from Perth, Western Australia.

House Vs. Hurricane are an Australian post-hardcore band from Melbourne, Victoria, Australia, formed in 2006. The band released their debut studio album, Perspectives in March 2010. The band's second studio album, Crooked Teeth was released in July 2012 and peaked at number 20 in the ARIA Charts.

The Quarters are an Australian alternative rock band, formed in Melbourne in 2005. The band shot to fame in 2007 after they were chosen by Grinspoon to open a Melbourne music festival which included acts such as Grinspoon, The Butterfly Effect and Little Birdy. The Rock and Roll outfit is composed of Christopher James (vocals/guitar), Stephanie Jane (vocals/bass) and Braiden Mann (drums).

Harlequin League is a Perth-based rock band formed in 2007.

The Shiny Brights are an indie rock band from Adelaide, Australia. The five members have varied tastes in music that all influence their songs; a mix of post-punk, Brit pop and garage rock, held together by lead singer Wolfgang's distinctive voice and the band's four-part gang vocals. They rehearse in a warehouse full of washing machines which inspired the band name, deriven from a laundromat franchise in Adelaide called Shiny Brights. 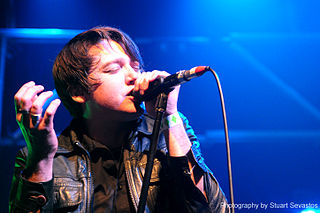 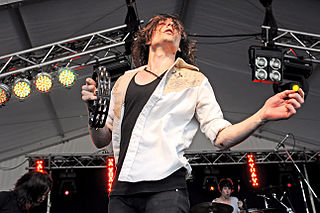 Russian Winters are an indie rock band from Perth, Western Australia. Their debut album Last Battles was released on 23 September 2011. 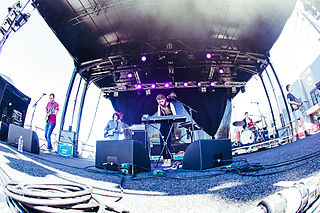 Temporal are an Australian metal band from Perth. The band formed in late 2010 through brothers Anthony and Stephen Santoro and guitarist Urvin Seeburuth. No longer Active

An Evening At Elmwood were an Australian post-hardcore/screamo band from Perth, Western Australia formed in January 2007. The band's most notable line-up consisted of Steve Caniglia (vocals), Jamie Calabrese, Michael Chewter, John Horner (bass), Colyn Prater (guitar) and Ben Broadley (guitar). An Evening At Elmwood released a demo and 2 Independent Releases, An Evening At Elmwood (demo), released in 2007, Can You Keep A Secret in 2007 which propelled the band to the top unsigned artist on Myspace Music for 7 consecutive months, and Learn To Breathe in 2008 which was released shortly before disbanding. The band were known for energetic, explosive performances in addition to humorous antics on and off the stage. "this six-piece band with two vocalists managed not to get hurt while working the stage despite the throwing around of guitars, body parts and a backflip".