The West Australian is the only locally edited daily newspaper published in Perth, Western Australia. It is owned by Seven West Media (SWM), [2] as is the state's other major newspaper, The Sunday Times . It is the second-oldest continuously produced newspaper in Australia, having been published since 1833. It tends to have conservative leanings, and has mostly supported the Liberal–National Party Coalition. It has Australia's largest share of market penetration (84% of WA) of any newspaper in the country.

The West Australian publishes international, national and local news. As of 23 February 2015 [update] , newsgathering was integrated with the TV news and current-affairs operations of Seven News , Perth, which moved its news staff to the paper's Osborne Park premises. SWM also publish two websites from Osborne Park including thewest.com.au and PerthNow. The daily newspaper includes lift-outs including Play Magazine, The Guide, West Weekend, and Body and Soul. Thewest.com.au is the online version of the daily newspaper available to subscribers.

Formerly a conservative "daily paper of record", The West has adopted the style of a popular tabloid. It has very ably utilised colour printing and its monopolist status to maximise display advertising including the use of multi-page advertorial supplements and loose inserts. Advertising is frequently accorded priority over news on the front page by means of a four-page wrap-around cover section.[ citation needed ]

As of January 2015 [update] , refraining from reporting greatly reduced print circulation, the paper claimed "readership across print and online platforms" of 1.8 million per month [10] (a daily average of less than 70,000). The West Australian recorded a significant fall of nearly 25% in profit in June 2016. A serious drop in circulation was also reported with average weekday circulation down from 157,000 to 145,000, while the weekend edition averaged 241,000, down from 258,000. Cost-saving measures such as staff redundancies was attributed to the poor performance. [11]

In 2021, audited "cross-platform readership" of The West and The Sunday Times combined was 4.1 million per month. [12] In February 2022, Seven West Media WA chief executive Maryna Fewster announced growth to 4.5 million per month boosted by (potentially duplicated) counts of hits on subsidiary websites including PerthNow, the video program Up Late, morning radio show The West Live, and sundry video packages launched on thewest.com.au. [13]

The West Australian was owned by the publicly listed company West Australian Newspapers from the 1920s. In 1969, the Melbourne based Herald & Weekly Times bought WAN and published the paper until 1987 when it was sold to Robert Holmes à Court's Bell Group, when the remainder of H&WT was bought by Rupert Murdoch's News Corporation. [14] [15] The following year Alan Bond, through Bond Corporation, gained control of Bell Group and hence the paper. This ownership structure only survived for a few years until the collapse of Bond Corporation. A newly formed company, West Australian Newspapers Holdings, then purchased the paper from the receivers before being floated in an oversubscribed $185 million public offering. [16] The company was listed on the Australian Securities Exchange on 9 January 1992. [17] A management fee of $217,000 and underwriting/brokers handling fee of $1.9 million were paid to companies associated with former short-term directors John Poynton and J. H. Nickson. [18] After acquiring the Seven Media Group in April 2011, West Australian Newspapers Holdings became Seven West Media, Australia's largest diversified media business. [19] [20]

The West Australian traces its origins to The Perth Gazette and Western Australian Journal, the first edition of which appeared on 5 January 1833. Owned and edited by Perth postmaster Charles Macfaull, it was originally a four-page weekly. [21] [22] It was, at first, published on Saturdays, but changed to Fridays in 1864. From 7 October 1864 it was known as The Perth Gazette and Western Australian Times and was published by Arthur Shenton, until 24 March 1871, after which the publisher was Joseph Mitchell, until 29 September 1871. The new publisher, M. Shenton, remained in place until 26 June 1874. when it was bought by a syndicate who renamed it The Western Australian Times and who in September 1874 increased production to two editions a week. [21] On 18 November 1879, it was relaunched as The West Australian. [23] In October 1883, production was increased to three editions per week; two years later it became a daily publication. The proprietors of the West Australian at that time also inaugurated the Western Mail , in 1885. Initially, delivery of the paper beyond settled areas was problematic, but the growth and development of the rural railway system in the early 1900s facilitated wider circulation.

In September 2015 the Australian Competition & Consumer Commission approved the acquisition of The Sunday Times , which would give Seven West Media a monopoly over major newspapers in the state. [24] Finalisation of the deal, which includes the website PerthNow, was announced by The West Australian on 8 November 2016. [25] In May 2019, SWM acquired Community Newspaper Group, adding 13 titles to the newspaper suite in WA, and have since moved all of the community websites onto the PerthNow website. [26] [27] In June 2019, The West Australian began putting some of its website content behind a subscription paywall. [28]

In 1933, The West Australian moved to the purpose-built Newspaper House on St Georges Terrace in Perth. [21] It included an office and publishing plant, and was a prominent landmark in the life of the city and state for more than 50 years. Newspaper House was vacated in the mid-1980s for the ill-fated "Westralia Square" redevelopment which was completed in 2012 under the name Brookfield Place. The editorial staff was temporarily relocated in a nearby office building. Recognised as part of an important heritage precinct, Newspaper House was scheduled for preservation and refurbishment. In 1988, larger and more modern accommodation for the paper's printing presses was commissioned in Osborne Park. In 1998, the editorial operations also moved to the Osborne Park complex. [21]

In the 1940s and later the newspaper published more than twenty editions of Charles Gardner's West Australian wildflowers. [29] At various stages in its history, the newspaper had a periodicals division that has published calendars, [30] gardening books, [31] [32] and collections of historical photographs. [33] [34]

In 1954 to celebrate the visit of Queen Elizabeth, a souvenir program was produced. [35]

In the 1990s a series of pictorial books from the photographic archives were produced:

The first book published in Western Australia, Report of the Late Trial for Libel!!! Clarke versus MacFaul (Fremantle, 1835), [47] by the future editor of the Swan River Guardian William Nairne Clark, concerned a libel case brought against the editor of the Perth Gazette, Charles Macfaull, by the accusations of incompetence and impugned character printed in regard to a Captain Clark. [48] A letter of apology was refused and the court awarded damages of £27 to the captain of the vessel. Macfaull maintained his reputation although his resources were significantly reduced by the verdict. [49]

In May 2007, then attorney-general and health minister in the State Labor government, Jim McGinty, described the newspaper as "the nation's most inaccurate and dishonest newspaper". He went on to attack the editor, Paul Armstrong, saying that "the board of West Australian Newspapers needs to sack the editor. It is personally driven by a particular individual". Armstrong responded by saying he "could not give a fat rat's arse" about Mr McGinty's comments and was then virulently attacked by premier Alan Carpenter, whose government the paper continued to denigrate until its defeat at the 2008 election. [52] [53]

On 8 December 2014 the management of West Australian Newspapers announced that printed editions of The West Australian would no longer be available in retail outlets located north of Broome in the Kimberley region of Western Australia, including towns such as Derby, Halls Creek, Fitzroy Crossing, Wyndham and Kununurra, due to the expense of transporting and delivering printed newspapers. [54]

Prosh is a satirical annual newspaper written by students at the University of Western Australia to raise funds for nominated charities.

GWN7 was an Australian television network serving all of Western Australia outside metropolitan Perth. It launched on 10 March 1967 as BTW-3 in Bunbury. It was an affiliate of the Seven Network and served one of the largest geographic television markets in the world—almost one-third of the continent. The network's name, GWN, is an acronym of Golden West Network, the network's name from 1979 to when the current name was adopted in 2011.

The Sunday Times is a tabloid Sunday newspaper published by Western Press Pty Ltd, a subsidiary of Seven West Media, in Perth and distributed throughout Western Australia. Founded as The West Australian Sunday Times, it was renamed The Sunday Times from 30 March 1902.

East Fremantle is a suburb of Perth, Western Australia, located 13 kilometres (8.1 mi) south-west of the central business district. The suburb is mainly residential, and is coterminous with the Town of East Fremantle local government area.

The Community Newspaper Group was a community newspaper business in Perth, Western Australia. Owned by Seven West Media, it published 23 community newspapers within the metropolitan region of Perth, from Yanchep and Two Rocks in the city's north to Mandurah in the south.

WAtoday is an online newspaper, focusing its coverage on Perth and Western Australia. It was established on 10 June 2008, and is owned by Fairfax Digital.

The W. A. Catholic Record, later The W. A. Record, later simply The Record, was a newspaper published in Perth, Western Australia from September 1874, and was the official organ of the Archdiocese of Perth. The magazine is now published bi-monthly in both paper and electronic formats.

Benjamin John Small is an Australian former politician. He was selected to serve as a senator for Western Australia, representing the Liberal Party, to fill a casual vacancy following Mathias Cormann's resignation. His first term lasted from November 2020 until his April 2022 resignation, and he resumed his term in May after being nominated to replace himself, the only occasion on which this has occurred. Small was unsuccessful in his re-election bid in the 2022 federal election and his term as senator concluded on 30 June 2022. 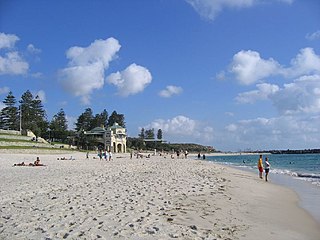 The western suburbs are an informally defined group of suburbs of Perth, Western Australia, located west of the city's central business district and north of the Swan River. The western suburbs are well known for high incomes, high house prices, riverfront mansions, private schools and proximity to ocean beaches.

Wikimedia Commons has media related to The West Australian .

Wikisource has original text related to this article:
The Perth Gazette
This page is based on this Wikipedia article
Text is available under the CC BY-SA 4.0 license; additional terms may apply.
Images, videos and audio are available under their respective licenses.