The incumbent Labor Government, led by Premier Mark McGowan, won a second consecutive four-year term in office in an historic landslide victory. Their primary challengers were the opposition Liberal Party, led by Opposition Leader Zak Kirkup, and the National Party, led by Mia Davies. Several minor parties also contested the election in the Assembly and Council.

ABC News psephologist Antony Green called the election for the Labor Party 42 minutes after the polls closed, with 0.7% of the vote counted. [1] [2] Labor won 53 out of 59 of the seats in the Assembly, outdoing its previous record of 41 seats in 2017, whilst the Liberals had a wipeout loss and won only two seats, suffering a 14% two-party preferred swing. [3] The Nationals claimed the four remaining seats and became the largest opposition party in the Assembly. The election is, to date, the most decisive election result at any level since Federation in terms of percentage of lower house seats controlled by the governing party (89.8%), [4] and two-party preferred margin (69.7%–30.3%). [5] Labor's unprecedented victory extended to the Legislative Council, and the party claimed a majority of the seats in the upper house. [6]

Among the more prominent casualties was Opposition Leader Zak Kirkup, who was heavily defeated in his own seat of Dawesville on a swing of over 14 percent.

On paper, Labor was left as the only party with official status in the legislature, as no other party won at least five seats. However, McGowan promised that the Nationals would be properly resourced as an opposition, envisaging that they would divide opposition funding with the Liberals. [10]

The 2017 state election saw Labor win one of the most comprehensive victories on record at the state or territory level in Australia. Labor won 41 of the 59 seats in the Legislative Assembly—a 23-seat majority—both WA Labor's strongest result ever, and the largest government seat tally and largest government majority in Western Australian parliamentary history. Additionally, Labor exceeded all published opinion polling, winning 55.5 percent of the two-party-preferred vote from a state record landslide 12.8 percent two-party swing. [11] [12] The Liberals were hit by a 15.8% swing against them on the primary vote and lost 18 seats to Labor, finishing with just 13 seats, the lowest share of seats the party has won in any election. The Nationals won the remaining five seats. [13] Labor also became the largest party in the Legislative Council with 14 of the 36 seats, ensuring it required at least five additional votes from non-government members to pass legislation. [13] [14]

In the lead up to the election, Premier Mark McGowan had high approval ratings over his handling of the COVID-19 pandemic. Opinion polls pegged the McGowan Government as unbackable favourites for a second term, and suggested that Labor would be re-elected by a record majority. Labor enjoyed support approaching 70% in the two-party preferred polls, and McGowan maintained a personal approval rating of 88%. [16] On 25 February 2021, 16 days before Election Day, Leader of the Opposition Zak Kirkup conceded that the Liberals could not win the election, citing polling indicating immense popularity for McGowan and the Labor Government. Kirkup said that his main priority was ensuring the Liberals would be able to form a credible opposition, arguing that a Liberal party room reduced to the single digits would be in no position to stop Labor if it went "too far." [17]

The following parties are contesting the election: [19]

Election dates are set in statute with four-year fixed terms, to be held on the second Saturday of March every four years. [20]

In January 2021, Liberal Party candidate for Victoria Park Amanda-Sue Markham defended her husband's controversial views on homosexuality and conversion therapy. Despite calls for her to do so, she did not withdraw from the election. [39]

A redistribution of electoral boundaries for the lower house was announced on 27 November 2019. The changes did not result in a district changing party status notionally based on the new boundaries. However, the districts of Hillarys and Joondalup became far more marginal, with margins of 0.4 and 0.03 respectively. There was one seat renamed in due to the boundary changes, with Girrawheen becoming the new district of Landsdale. Ten districts were not affected by boundary changes. [43]

This is a pre-election pendulum, taking into account the 2019 boundary redistribution. Estimated margins are calculated by Antony Green for the Western Australian Parliamentary Library. [43] Retiring members are shown in italics.

While all electorates swung towards Labor, there was some correlation between certain characteristics (demographics as measured by the 2016 Australian Census) and the magnitude of the two-party-preferred swing to Labor in each electorate. This does not necessarily imply a causal relationship but rather some similarities between electoral districts which moved more or less towards the Labor party on the two-party-preferred. [51]

Electoral districts with a high proportion of persons aged 60 years or older swung less to Labor than the rest of the state (R2 = 0.2, p < 0.001), even after adjusting for the incumbency effect mentioned above. [51]

Electorates with a higher proportion of persons who spoke a language other than English at home also somewhat swung more to Labor than the rest of the state (R2 = 0.08, p < 0.05). [51]

This article provides information on candidates who stood for the 2001 Western Australian state election, held on 10 February 2001.

A by-election for the seat of Vasse in the Western Australian Legislative Assembly was held on 18 October 2014. The by-election was triggered by the resignation of Liberal MLA and former Liberal leader Troy Buswell on 3 September 2014, who won the seat at the 2013 election with a 57.3 percent primary and a 71.2 percent two-party vote. It was held on the same day as the 2014 Casuarina by-election in the Northern Territory.

Reece Raymond Whitby is an Australian politician. He has been a Labor member of the Western Australian Legislative Assembly since the 2017 state election, representing Baldivis. Shortly after the 2017 election, Whitby was appointed by Premier of Western Australia Mark McGowan as Parliamentary Secretary to the Treasurer and Minister for Energy and Finance, and as Parliamentary Secretary to the Minister for Environment and Disability Services. Whitby was successfully re-elected to the seat of Baldivis in the 2021 state election, and he was appointed to the Second McGowan Ministry, becoming the Minister of Emergency Services; Racing and Gaming, Small Business and Volunteering.

Zak Richard Francis Kirkup is an Australian former politician. He was a Liberal member of the Western Australian Legislative Assembly from the 2017 state election to the 2021 state election, representing Dawesville. 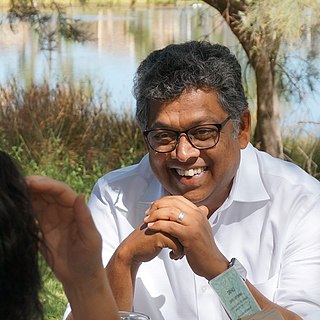 Jagadish "Jags" Krishnan is an Indian-born Australian politician and general practitioner. He was elected as a Labor member for Riverton in the Western Australian Legislative Assembly at the 2021 state election.

Stuart Neil Aubrey is an Australian politician and former electrician, who was elected as a Labor member for Scarborough in the Western Australian Legislative Assembly at the 2021 state election.

Lisa Anne Munday is an Australian politician. She has been a Labor member of the Western Australian Legislative Assembly since the 2021 state election, representing Dawesville.