The Legislative Assembly today has 59 members, elected for four-year terms from single-member electoral districts. Members are elected using the preferential voting system. As with all other Australian states and territories, voting is compulsory for all Australian citizens over the legal voting age of 18.

The Legislative Assembly was the first elected legislature in Western Australia, having been created in 1890, when Western Australia gained self-government. It initially consisted of 30 members, all of whom were elected, although only male landowners could vote. This replaced a system where the Governor was responsible for most legislative matters, with only the appointed Legislative Council to guide him.

Suffrage was extended to all adult males in 1893, although Indigenous Australians were specifically excluded. Women gained the right to vote in 1899, making Western Australia the second of the Australian colonies (behind South Australia) to do so. In 1921, Edith Cowan became the first woman to be elected to parliament anywhere in Australia when she won the Legislative Assembly seat of West Perth for the Nationalist Party. [1]

For many years, Western Australia used a zonal electoral system for both houses of parliament. In most Australian jurisdictions, each state electorate represents an approximately equal number of voters. However, in Western Australia, until 2008 an MP represented 28,519 voters in greater Perth (the Metropolitan Region Scheme area) or 14,551 country voters. [2] At the 2006 census taken on 8 August 2006, 73.76% of Western Australia's residents lived in and around Perth, [3] but only 34 of Western Australia's 57 Legislative Assembly seats, representing 60% of the total, were located in the metropolitan region. There has been strong support over time in some quarters for the principle of one vote, one value, particularly from the Labor Party who were at particular disadvantage under the system. Up until 2005, reform had proceeded gradually—the most dramatic changes had occurred with the enactment of the Electoral Districts Act 1947 and the Acts Amendment (Electoral Reform) Act 1987, the latter of which raised the number of metropolitan seats from 29 to 34. [4]

Effective on 20 May 2005, the Electoral Amendment and Repeal Act 2005 (No.1 of 2005) abolished the country-metropolitan distinction for the Legislative Assembly, but all seats then in place remained until the following election on 6 September 2008. A redistribution of seats announced by the Western Australian Electoral Commission on 29 October 2007 places 42 seats in Perth and 17 in the country, with a variation of ±10% from the average population normally permitted. The only distinction for rural seats is that any seat with an area of 100,000 square kilometres (38,610 sq mi) or greater (that is, 4% of the State's land area) may have a variation of +10%–20% from the average, using an adjusted population based on the seat's area in square kilometres. [5]

30 votes as a majority are required to pass legislation.

A group voting ticket (GVT) is a shortcut for voters in a preferential voting system, where a voter can mark support for a party slate instead of marking preferences for individual candidates. For multi-member electoral divisions with single transferable voting, a group or party registers a GVT before an election with the electoral commission. When a voter selects a group or party "above the line" on a ballot paper, their vote is distributed according to the registered GVT for that group. 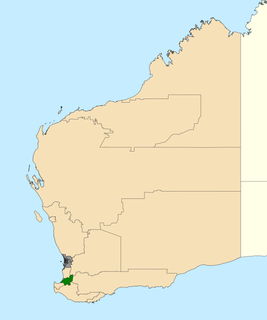 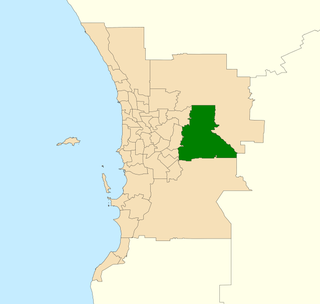 Kalamunda is an electoral district of the Legislative Assembly in the Australian state of Western Australia.

The Metropolitan Province was a multi-member electoral province of the Western Australian Legislative Council, located in the metropolitan region of Perth. It was created by the Constitution Acts Amendment Act 1893, and became effective on 22 May 1894 following the first council elections following the granting of responsible government to Western Australia. The seat was safe for the Liberal Party and its predecessors.

The South Metropolitan Province was a two-member electoral province of the Western Australian Legislative Council, located in metropolitan Perth. It was one of several metropolitan seats created following the enactment of the Constitution Acts Amendment Act (No.2) 1963, and became effective on 22 May 1965. The province was very safe for the Labor Party, which held most or all of the component Assembly seats.

A referendum concerning the reform of the New South Wales Legislative Council was put to New South Wales voters on 13 May 1933 and was passed by the voters with a margin of 2.94%. The text of the question was: