The Governor, as representative of the Crown, is the formal repository of power, which is exercised by him or her on the advice of the Premier of Western Australia and the Cabinet. The Premier and Ministers are appointed by the Governor, and hold office by virtue of their ability to command the support of a majority of members of the Legislative Assembly. Judicial power is exercised by the Supreme Court of Western Australia and a system of subordinate courts, but the High Court of Australia and other federal courts have overriding jurisdiction on matters which fall under the ambit of the Australian Constitution.

In a parliamentary or semi-presidential system of government, a reserve power, also known as discretionary power, is a power that may be exercised by the head of state without the approval of another branch or part of the government. Unlike in a presidential system of government, the head of state is generally constrained by the cabinet or the legislature in a parliamentary system, and most reserve powers are usable only in certain exceptional circumstances.

The Parliament of Victoria is the bicameral legislature of the Australian state of Victoria that follows a Westminster-derived parliamentary system. It consists of the King, represented by the Governor of Victoria, the Legislative Assembly and the Legislative Council. It has a fused executive drawn from members of both chambers. The parliament meets at Parliament House in the state capital Melbourne. The current Parliament was elected on 26 November 2022, sworn in on 20 December 2022 and is the 60th parliament in Victoria.

In Australia's political system, the Federal Executive Council is a body established by Section 62 of the Australian Constitution to advise the Governor-General, and comprises, at least notionally, all current and former Commonwealth ministers and assistant ministers. As the Governor-General is bound by convention to follow the advice of the Executive Council on almost all occasions, the Executive Council has de jure executive power. In practice, this power is used to legally enact the decisions already made by Cabinet, which according to the practices of the Westminster system has no de jure authority in its own right.

The Victoria State Government, also referred to as just the Victorian Government, is the state-level authority for Victoria, Australia. Like all state governments, it is formed by three independent branches: the executive, the judicial, and the parliament.

The government of Alberta is the body responsible for the administration of the Canadian province of Alberta. As a constitutional monarchy, the Crown—represented in the province by the lieutenant governor—is the corporation sole, assuming distinct roles: the executive, as the Crown-in-Council; the legislature, as the Crown-in-Parliament; and the courts, as the Crown-on-the-Bench. The functions of the government are exercised on behalf of three institutions—the Executive Council; the Legislative Assembly; and the judiciary, respectively. Its powers and structure are partly set out in the Constitution Act, 1867.

The separation of powers in Australia is the division of the institutions of the Australian government into legislative, executive and judicial branches. This concept is where legislature makes the laws, the executive put the laws into operation, and the judiciary interprets the laws; all independently of each other. The term, and its occurrence in Australia, is due to the text and structure of the Australian Constitution, which derives its influences from democratic concepts embedded in the Westminster system, the doctrine of "responsible government" and the United States version of the separation of powers. However, due to the conventions of the Westminster system, a strict separation of powers is not always evident in the Australian political system, with little separation between the executive and the legislature, with the executive required to be drawn from, and maintain the confidence of, the legislature; a fusion.

The government of Ontario is the body responsible for the administration of the Canadian province of Ontario. A constitutional monarchy, the Crown—represented in the province by the lieutenant governor—is the corporation sole, assuming distinct roles: the executive, as the Crown-in-Council; the legislature, as the Crown-in-Parliament; and the courts, as the Crown-on-the-Bench. The functions of the government are exercised on behalf of three institutions—the Executive Council; the Provincial Parliament ; and the judiciary, respectively. Its powers and structure are partly set out in the Constitution Act, 1867. 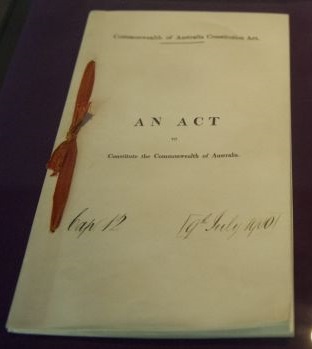 The Constitution of Australia is a constitutional document that is supreme law in Australia. It establishes Australia as a federation under a constitutional monarchy and outlines the structure and powers of the Australian government's three constituent parts, the executive, legislature, and judiciary.

The Government of Quebec is the body responsible for the administration of the Canadian province of Quebec. A constitutional monarchy, the Crown is the corporation sole, assuming distinct roles: the executive, as the Crown-in-Council; the legislature, as the Crown-in-Parliament; and the courts, as the Crown-on-the-Bench. The powers of the Crown are exercised on behalf of three institutions—the Executive Council (Cabinet); the National Assembly; and the judiciary, respectively.

The Executive Council of Queensland is the body through which the Premier and Ministers advise the Governor on the exercise of executive powers.