Donald Thomas Punch (born 31 August 1956) is an Australian politician. He has been a Labor member of the Western Australian Legislative Assembly since the 2017 state election, representing Bunbury.

Punch studied psychology and social work at the University of Western Australia later completing an MBA at Edith Cowan University. He has worked throughout regional Western Australia as a social worker and later as a Senior Executive in the public sector. He became CEO of the South West Development Commission in 1998, serving until he resigned in 2016 upon his preselection as the Labor candidate for Bunbury. [1] In his role as CEO Punch was responsible for many aspects of The South West's development including projects such as the renewal of the town centre of Manjimup with an emphasis on food based tourism, redevelopment of Busselton airport and renewal of the water front in Bunbury.

His work is characterised by blending social and economic development and looking to new and emerging technologies and creative design as part of the emergence of a new definition of the south west.

Punch has strong views about the role of Bunbury in the overall development of WA and has pushed hard for Bunbury to be recognised as Western Australia's second city. This was recognised in the WA Labor Plan for Bunbury.

Punch is a strong advocate for Aboriginal involvement in decision making and ensured there was Aboriginal representation at the newly formed Bunbury Development Committee (BDC). Chaired by local advocate Robyn Fenech, the BDC is the only sub committee of the Western Australian Planning Commission of its kind in Western Australia. It is responsible for advising the WAPC and the Minister for Planning on the development of Bunbury as Western Australia's second city.

Punch has major plans to see the Port of Bunbury as an integral part of the state strategic freight network collaborating with Fremantle Ports on the state freight task and is an advocate of a resurgent manufacturing sector in the industrial lands surrounding Bunbury.

Punch was appointed to the WA Methamphetamine Task Force in 2017 and is a member of the Community Development and Justice Standing Committee.

Punch was born in 1956 in Pwllhelli, Wales. [2] He migrated to Australia in 1971 from Manchester in the UK and attended high school in Manjimup and Collie. His early life in Manchester was turbulent following the separation of his mother and father. He migrated to Australia at the age of 14 and joined his brother Tony and his wife Ann and recommenced high school in Manjimup. He matriculated from Collie High School in 1973 and attributes this to a combination of inspiring teachers and the regional school experience.

He studied Psychology at UWA and then spent 1978 working back in Manchester. In 1979 he returned to Australia to study Social Work at UWA. Here he met his first wife Beverley and together had two sons Alan and Daniel. He worked as a social worker in Moora later transferring to Collie. In 1986 Beverley died following complications from heart surgery and this had a devastating impact on him and formulated much of his later thinking about grief, loss and human relationships.

Punch later became the regional Director for the Department for Family and Children's Services northern regions and married Helen Wychlo, the daughter of Polish immigrants.

In 1998 Punch left Family and Children's Services to take on the role of CEO of the South West Development Commission. He completed his MBA in 2003.

Punch is a keen sailor and holds commercial marine qualifications both as a master of commercial vessels and an instructor. 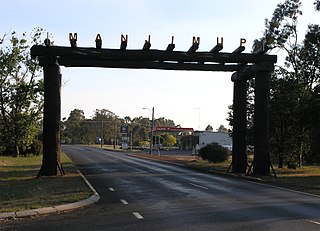 The Campaign Against Nuclear Energy (CANE) was established in Perth, Western Australia on 14 February 1976 by Friends of the Earth (FOE). It included Peter Brotherton, John Carlin, Mike Thomas and Barrie Machin. CANE was a non-profit grass roots organisation whose aim was to stop the establishment of a nuclear power plant in Western Australia (WA) and to halt uranium mining. The organisation operated out of the Environment Centre in Wellington Street, Perth. The Whitlam Federal government in 1974 had dedicated about A$7,000 per state to set up Regional Environment Centres. Perth's Environment Centre housed other groups including the Australian Conservation Foundation, the Conservation Council of Western Australia, Friends of the Earth, and the Campaign to Save Native Forests. A CANE group was also established in Adelaide, South Australia.

Julian Fletcher Grill is an Australian former politician. Grill was a member of the Parliament of Western Australia between 1977 and 2001.

Anthony David McRae is an Australian politician. He was an ALP member of the Western Australian Legislative Assembly from 2001 to 2008, representing the electorate of Riverton. McRae unexpectedly won the traditionally Liberal seat of Riverton in the 2001 Gallop-led election and held the seat at the 2005 election.

Bill Bunbury is a former radio broadcaster and producer for the Australian Broadcasting Corporation, and an accomplished historian and writer.

William Garnsworthy Bennett was a Western Australian architect, well known for his Art Deco and Inter-War Functionalist style of civic, commercial and domestic buildings, including the Lord Forrest Olympic Pool in Kalgoorlie, the Beverley Town Hall, the Raffles Hotel and Plaza Theatre and Arcade in Perth.

Cedric Wyatt was an Australian public servant and indigenous rights advocate. A cousin of Ken Wyatt and the father of Ben Wyatt, both elected politicians, Wyatt worked in senior positions for Western Australia's Public Sector Commission and the federal Australian Public Service.

This is a list of newspapers published in, or for, the South West region of Western Australia.