Minister for Housing is a position in the government of Western Australia, currently held by Peter Tinley of the Labor Party. The position was first created after the 1947 state election, for the government of Sir Ross McLarty, and has existed in every government since then. The minister is responsible for the state government's Department of Housing, as well as several other government agencies.

The Second Fraser Ministry was the fifty-second Australian Commonwealth ministry, and ran from 22 December 1975 to 20 December 1977.

The Third Fraser Ministry was the fifty-third Australian Commonwealth ministry, and ran from 20 December 1977 to 3 November 1980.

The Fourth Fraser Ministry was the forty-seventh Australian Commonwealth ministry, and ran from 3 November 1980 to 7 May 1982.

The Minister of Commerce was a cabinet member in the Government of France. The position sometimes included responsibility for other government departments such as Public Works, Interior, Agriculture and Posts, Telegraphs and Telephones. The position has largely been merged today into the expanded Ministry of the Economy, Finance and Industry.

Australia–Russia relations date back to 1807, when the Russian warship Neva arrived in Sydney as part of its circumnavigation of the globe. Consular relations between Australia and the Russian Empire were established in 1857. Diplomatic relations between Australia and the Soviet Union were established in 1942, and the first Australian embassy opened in 1943. At present, relations between the two countries have severely deteriorated following Russia's involvement in Ukraine as well as the suspected involvement in the downing of Malaysia Airlines Flight 17, which claimed the lives of 38 Australians. Relations were tested as Putin arrived for the 2014 G20 Summit in Brisbane, Queensland, among reports Russian warships were closing in on Australian waters. According to a 2017 Pew Global Attitudes Project survey, 37% of Australians have a favorable view of Russia, with 55% expressing an unfavorable view. 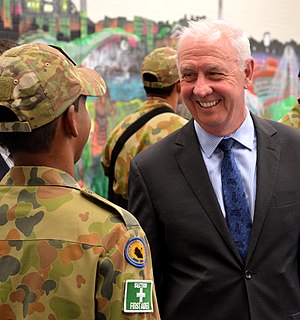 Francis Michael Logan has been the Minister for Emergency Services and Corrective Services in the McGowan Labor Government since 17 March 2017 and sits in Western Australia's Legislative Assembly.

The Ministry of Industry, Trade and Tourism (MINCOTUR) is the department of the Government of Spain responsible for the proposal and execution of the government policy on industry, trade and tourism, including among its competences the industrial development and of the SMEs, the promotion and defense of the industrial property, the commercial policy of internationalization and of investments and external transactions, as well as the politics of tourism and the rest of competences and attributions that that the legal system attributes to it. Likewise, in coordination with the Foreign Ministry is responsible for the international cooperation on this matters.

Frederick Maclean ("Mac") Hewitt, was an Australian company director and politician. He was a member of the New South Wales Legislative Council for the 21 years from 1955 to 1976 representing the Liberal Party, serving as Leader of the Liberal Party in the council as well as on the Askin cabinet as Minister for Child and Social Welfare and later as Minister for Labour and Industry. He continued to serve in the Lewis and Willis cabinets in the portfolios of Labour and Industry, Consumer Affairs and Federal Affairs. Following the Coalition loss at the 1976 election, Hewitt continued to serve as Deputy Leader of the Opposition and leader of the Liberal Party in the council until his retirement, before his death a few months later.

Minister for Community Services is a position in the government of Western Australia, currently held by Simone McGurk of the Labor Party. The position was first created after the 1943 state election, for the government of John Willcock. It was abolished in 1947 and not recreated until 1971, but has existed in most governments since then. The minister is one of the ministers responsible for the state government's Department of Local Government and Communities.