Thursday FC was an Australian sports variety television program which covered professional association football in Australia. It was shown on SBS2 and presented by Lucy Zelic and former footballer David Zdrilic.

The TV series ceased in February 2014 after poor audience ratings. South Park replaced it after it was axed.

The format was loose and based on the BBC's Top-Gear style presentation format. Innovative use of graphics, social media and live music made the program stand out from the usual sport themed programs available to Australian audiences. Graphics used by the producers were in a comic book style and made the show visually memorable.

The show aired on Thursday nights, the first episode premiered on 10 October 2013 ahead of the first game of the 2013–14 A-League season. The program showcased the latest football news, views and opinions with a predominant focus on the A-League, the hour-long show was packed with entertainment, interviews and live performances. Each episode included a look at each upcoming A-League game for the round, highlights from the previous weekend of football as well as special guests including players, celebrity tipping and live music acts.

The show aired once weekly on Thursday nights at 8:30 PM. [1] It can also be viewed online and on many televisions with Smart capabilities through SBS on Demand.

WWE SmackDown, also known as Friday Night SmackDown or simply SmackDown, is an American professional wrestling television program produced by WWE that as of July 2022 currently airs live every Friday at 8pm ET on Fox. Fox Deportes simulcasts the program with Spanish-language commentary. The show features characters from the SmackDown brand, to which WWE employees are assigned to work and perform. The show as of July 2022 is currently considered to be one of two flagship shows, along with Monday Night Raw.

20/20 (stylized as 2020) is an American television newsmagazine that has been broadcast on ABC since June 6, 1978. Created by ABC News executive Roone Arledge, the program was designed similarly to CBS's 60 Minutes in that it features in-depth story packages, although it focuses more on human interest stories than international and political subjects. The program's name derives from the "20/20" measurement of visual acuity.

WWE Heat is an American professional wrestling television program that was produced by World Wrestling Entertainment (WWE) and aired from August 2, 1998 to May 30, 2008. Originally produced under the World Wrestling Federation (WWF) banner, it aired on USA Network (1998–2000), MTV (2000–2003), and TNN/Spike TV (2003–2005) in the United States, CTV Sportsnet in Canada, and Channel 4, Sky1, and Sky Sports in the United Kingdom. From 2002, due to the WWE brand extension, Heat served as a supplementary show to the Raw brand, focusing more exclusively on its mid-card performers and matches, and was recorded before the week's television taping of Raw.

David Allen Zdrilic is an Australian soccer coach and former player, who is currently the assistant coach of Serie A club Genoa. Zdrilic is also a football presenter on the Special Broadcasting Service (SBS), Most recently he was a key figure in SBS's coverage of the 2018 FIFA World Cup in Russia.

Nedjeljko Zelic, commonly known as Ned Zelic, is an Australian former footballer who played as a centre-back or defensive midfielder.

The World Game was an Australian football (soccer) television show broadcast on the SBS network, as well as a dedicated associated website. The show debuted in 2001 and was the only Australian TV programme dedicated to both football news and issues within Australia as well as around the world. Its popularity led to the launch of an associated website the following year. The TV show was dropped in 2019, whilst the website closed in 2021, and merged with the core SBS Sport website.

In broadcast programming, counterprogramming is the practice of offering television programs to attract an audience from another television station airing a major event. It is also referred when programmers offer something different from the rival's program as an alternative, to increase the audience size.

Nerds FC is an Australian television documentary featuring football. The first series of the show was aired as a lead-in for the 2006 FIFA World Cup on the Special Broadcasting Service network that featured coverage of the Australian national soccer team.

ESPN Australia is the Australian division of ESPN, part of the ESPN International grouping. It is offered in Australia, New Zealand, Papua New Guinea and the Pacific Islands. 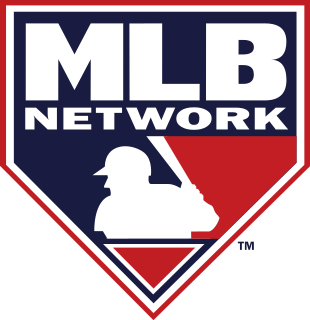 The MLB Network is an American television sports channel dedicated to baseball. It is primarily owned by Major League Baseball, with Warner Bros. Discovery through its sports unit, Comcast's NBC Sports Group, Charter Communications, and Cox Communications having minority ownership.

@midnight with Chris Hardwick was an American late night Internet-themed panel game show, hosted by Chris Hardwick, that aired Monday through Thursday nights between October 21, 2013 and August 4, 2017 on Comedy Central. @midnight with Chris Hardwick premiered on October 21, 2013. It was syndicated internationally in Australia on SBS2 and The Comedy Channel, in the United Kingdom on Comedy Central Extra, and in Canada formerly on MuchMusic and later on The Comedy Network.

Lucy Zelić is an Australian television presenter living in Sydney.

Until the broadcast contract ended in 2013, the terrestrial television networks CBS, NBC, and Fox, as well as cable television's ESPN, paid a combined total of US$20.4 billion to broadcast NFL games. From 2014 to 2022, the same networks will pay $39.6 billion for exactly the same broadcast rights. The NFL thus holds broadcast contracts with four companies that control a combined vast majority of the country's television product. League-owned NFL Network, on cable television, also broadcasts a selected number of games nationally. In 2017, the NFL games attracted the top three rates for a 30-second advertisement: $699,602 for NBC Sunday Night Football, $550,709 for Thursday Night Football (NBC), and $549,791 for Thursday Night Football (CBS).