Matthew Okine (born 12 April 1985) is an Australian stand-up comedian, actor, author, rapper and radio presenter of Ghanaian descent living in Sydney. Okine was a co-host on the breakfast show on Triple J with Alex Dyson from 2014 to 2016.

Triple J is a government-funded, national Australian radio station intended to appeal to listeners of alternative music, which began broadcasting in January 1975. The station also places a greater emphasis on broadcasting Australian content compared to commercial stations. triple j is a division of the Australian Broadcasting Corporation.

Alexander Edward Dyson is an Australian radio presenter who presented the breakfast show on Australian youth radio station Triple J from 2010 to 2016, alongside Tom Ballard and then with Matt Okine.

Okine has performed stand-up on Rove , at the Edinburgh Festival Fringe, Sydney Comedy Festival and Melbourne International Comedy Festival (for which he won award for best newcomer). He has appeared on numerous TV shows, including This is Littleton , Legally Brown and Hughesy, We Have a Problem and as a guest contributor on Dirty Laundry Live , Can of Worms and The Agony of Modern Manners . In 2012, he released a DVD entitled Being Black n Chicken n Shit. He cites Aziz Ansari and Dave Chappelle as influences [1] and has supported them when they toured Australia.

Rove, originally titled Rove Live, was an Australian television variety show, that featured live music performances and interviews with local and international celebrity guests. The program premiered on the Nine Network on 22 September 1999, before moving to Network Ten which aired the program from 2000 until November 2009. The show was hosted by comedian Rove McManus through his production company Roving Enterprises, and featured an ensemble cast who presented various segments throughout the course of the show. The show won the Logie Award for "Most Popular Light Entertainment Program" five times. 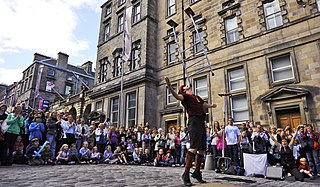 The Edinburgh Festival Fringe is the world's largest arts festival, which in 2018 spanned 25 days and featured more than 55,000 performances of 3,548 different shows in 317 venues. Established in 1947 as an alternative to the Edinburgh International Festival, it takes place annually in Edinburgh, Scotland, in the month of August. It has been called the "most famous celebration of the arts and entertainment in the world" and an event that "has done more to place Edinburgh in the forefront of world cities than anything else.

The Sydney Comedy Festival is an annual comedy festival held in Sydney, Australia.

H2O: Just Add Water, also known as H2O, is an Australian dramatic fantasy television series for children and teenagers created by Jonathan M. Shiff. It first screened on Australia's Network Ten and runs in syndication on channels in over 120 countries and has a worldwide audience of more than 250 million. It was filmed on location at Sea World and other locations on the Gold Coast. The show revolves around three teenage girls facing everyday teen problems with an added twist: they're mermaids with powers over water.

In 2014, Okine replaced Tom Ballard as co-host on the breakfast show on Triple J after Ballard resigned to pursue stand-up comedy. [3] In 2016, Okine and Dyson both left Triple J to pursue other interests.

How Not to Behave is an Australian television comedy series on ABC, hosted by Gretel Killeen and Matt Okine. The 15-part series is based on a Swedish format which examines etiquette and manners. The series premiered on 15 July 2015.

At the 2015 ARIA Awards, he won Best Comedy Release for Live at the Enmore Theatre. [5]

The ARIA Music Award for Best Comedy Release, is an award presented at the annual ARIA Music Awards, which recognises "the many achievements of Aussie artists across all music genres", since 1987. It is handed out by the Australian Recording Industry Association (ARIA), an organisation whose aim is "to advance the interests of the Australian record industry."

In 2017, Okine wrote and starred in The Other Guy on Stan.

Okine grew up in Brisbane. [1] His father, Mack Okine, is Ghanaian. His mother, Roslyn, died of breast cancer when he was 12 years old. [6]

Lindsay McAllister M "The Doctor" McDougall is an Australian rock guitarist and radio presenter. Since 1996, he has been the lead guitarist in punk rock band, Frenzal Rhomb alongside lead singer Jay Whalley. He has co-written songs with fellow band members including their highest charting single, "You Are Not My Friend". During 2003 McDougall organised Rock Against Howard, a compilation album, by various Australian musicians as a protest against incumbent Prime Minister, John Howard's government. It was released in August 2004, before the October federal election; Howard's coalition was nonetheless re-elected. In 2005, with Whalley, he co-hosted the Breakfast Show on national youth radio network Triple J, as Jay and the Doctor. In 2008, after Whalley left, he worked with Robbie Buck and Marieke Hardy. From 2010 to late 2014, he hosted the afternoon drive time programme. Since January 2018, McDougall has fronted the afternoon drive show on the ABC’s local radio station in Wollongong, 97.3 ABC Illawarra. He is an animal rights activist and a vegan.

Peter Berner is an Australian stand-up comedian, television and radio presenter, cartoonist and painter. He hosted The Einstein Factor and Backberner on ABC Television. He previously hosted the news comedy TV series The B Team with Peter Berner on Sky News Australia.

Edward Robert Kavalee is an Australian comedian, actor, radio and television presenter. He is a recurring panelist on Network 10's Have You Been Paying Attention? with Sam Pang and is a co-host on the Hit Network's 2Day FM alongside Ash London and Grant Denyer.

Sam Simmons is an Australian comedian and radio and TV presenter.

Paul Francis Verhoeven is an Australian broadcaster, writer, blogger and comedian, and the host of Steam Punks on ABC3. He grew up on Sydney's northern beaches, and moved to Melbourne after completing a Bachelor of Film Studies at the University of New South Wales.

Melinda Claire Buttle is an Australian comedian, television and radio presenter and writer. In April 2013, she was awarded the Directors Choice Award at the Melbourne International Comedy Festival for her solo show 'How Embarrassment'. She wrote on and starred in Network Ten's This Week Live as a live correspondent. She was also a regular guest on radio stations Triple J, Nova and 612 ABC Brisbane and wrote weekly for the Queensland statewide newspaper The Courier Mail as well as ABC's The Drum.

Ghanaian Australians are Australian citizens and residents of Ghanaian origin and descent. More than 50% of those who are Ghana-born live in Sydney.

Ciaran Lyons is an Australian stand up comedian and presenter for national radio network triple j.

Genevieve "Gen" Fricker is an Australian stand-up comedian, writer, actor, and radio presenter. She is currently the host of the weekday Lunch program on triple j.

Ben Harvey is an Australian radio presenter and comedian. He co-hosts the Breakfast show on Triple J with Liam Stapleton.