The Thyella class of destroyers were ordered by the Royal Hellenic Navy before World War I when the Greek government embarked on a naval buildup after losing the Greco-Turkish War of 1897. These four ships were ordered from Britain in 1905 and were among the last vessels built at the Yarrow shipyard at Cubitt Town, London, before its move to the Clyde.

Yarrow Shipbuilders Limited (YSL), often styled as simply Yarrows, was a major shipbuilding firm based in the Scotstoun district of Glasgow on the River Clyde. It is now part of BAE Systems Surface Ships, owned by BAE Systems, which has also operated the nearby Govan shipyard since 1999.

Nafkratousa was a Thyella class destroyer that served in the Royal Hellenic Navy (1906-1921). 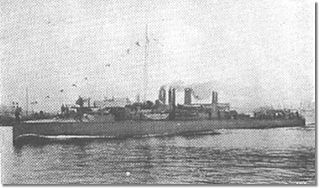 Sfendoni was a Thyella class destroyer that served in the Royal Hellenic Navy (1907-1945). It was the second ship of that name in the Hellenic Navy, but the first destroyer-type vessel bearing the name.

The Hellenic Navy is the naval force of Greece, part of the Hellenic Armed Forces. The modern Greek navy has its roots in the naval forces of various Aegean Islands, which fought in the Greek War of Independence. During the periods of monarchy it was known as the Royal Navy.

The Flower-class corvette was a British class of 267 corvettes used during World War II, specifically with the Allied navies as anti-submarine convoy escorts during the Battle of the Atlantic. Royal Navy ships of this class were named after flowers, hence the name of the class.

The History of the Hellenic Navy begins with the birth of modern Greece, and due to the maritime nature of the country, this force has been the premier service of the Greek Armed Forces.

The Thornycroft type leader or Shakespeare class were a class of five destroyer leaders designed by John I. Thornycroft & Company and built by them at Woolston, Southampton for the Royal Navy towards the end of World War I. They were named after historical naval leaders. Only Shakespeare and Spenser were completed in time for wartime service. The other three were completed after the war, Broke and Keppel after being towed to Royal dockyards for completion, and two further ships - Saunders and Spragge - were cancelled. The function of a leader was to carry the flag staff of a destroyer flotilla, therefore they were enlarged to carry additional crew, offices and signalling equipment, allowing a fifth gun to be carried. These ships were very similar to the Admiralty type leader, but had broad, slab-sided funnels characteristic of Thornycroft designs.

Adrias was a Type III Hunt-class destroyer that was originally built for the Royal Navy as HMS Border but never commissioned. Before her completion, she was loaned to the Royal Hellenic Navy on 20 July 1942 and commissioned as Adrias on 5 August 1942 in order to relieve heavy losses of ships sustained by the Royal Hellenic Navy during the German invasion of 1941 and throughout the war. Adrias took her name from the ancient Greek town of Adria in Italy, at the mouth of the Po river, after which the Adriatic Sea is named.

Thyella was a Thyella class destroyer that served in the Royal Hellenic Navy (1907-1941). It was the first ship of that name in the Hellenic Navy. 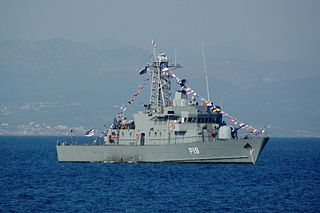 The gunboat class Osprey 55 is a Danish-designed class of naval ship currently in service in the Hellenic Navy and Royal Moroccan Navy. Two ships were ordered by Greece in March 1988 and built by Hellenic Shipyards. The first one was laid down on 8 May 1989 and launched on 19 December 1989. The second ship was laid down on 9 November 1989 and launched on 16 May 1990. Armament is of modular design and therefore can be changed. 76-mm guns replaced the Bofors 40-mm in 1995, after being taken from decommissioned Gearing-class destroyers. Options on more of the class were shelved in favour of the slightly larger HSY-55 class.

Ierax was an Aetos-class destroyer which had been built for Argentina as Santa Fe. She served in the Hellenic Royal Navy from 1912 to 1946.

Panthir was an Aetos-class destroyer which served in the Hellenic Royal Navy from 1912–1946.

Leon was an Aetos-class destroyer which served in the Royal Hellenic Navy from 1912–1941.

The Aetos class were four destroyers were originally constructed for the Argentine Navy as the San Luis class. In Greek they are known as the Thiria class, after the ships' names. They were purchased by the Royal Hellenic Navy in October 1912 when the Greek government expanded its navy after losing the Greco-Turkish War of 1897 and in anticipation of the Balkan Wars. In December 1916, during World War I, three of the destroyers were seized by France and served in the French Navy until 1918, all except Panthir. They were returned to Greece in 1918. In 1924–1925, they were extensively rebuilt and continued in service into World War II, where they fought with the Allies. Leon was sunk by German aircraft at Suda Bay, Crete. The other three destroyers survived the war and were used as station ships during the Greek Civil War. They were discarded in 1946.

The Niki class of destroyers were ordered by the Royal Hellenic Navy before World War I when the Greek government embarked on a naval buildup after losing the Greco-Turkish War of 1897. These four ships were ordered from Germany in 1905 and were built in the Vulcan shipyard at Stettin. 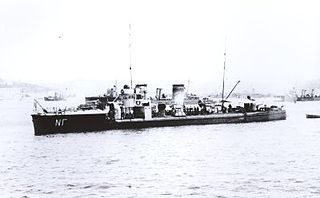 Nea Genea was a destroyer that served in the Royal Hellenic Navy from 1912-1919. She was originally the German destroyer V-6.

Keravnos was a destroyer that served in the Royal Hellenic Navy from 1912 - 1919. She was originally the German destroyer V-5.

Epameinondas Kavvadias was a Greek admiral who served thrice as Chief of the Navy General Staff and led the Greek fleet in the first years of World War II.

Pyrros Lappas was a Greek Navy officer. He served in the Asia Minor Campaign, commanded warships in World War II, and assumed senior leadership positions in the post-war navy, culminating as Chief of the Hellenic Navy General Staff in 1952–1958. He then served for two years as head of the Military Household of King Paul of Greece, as General Secretary of the Hellenic Olympic Committee in 1961–1968, and as a member of the International Olympic Committee (1965–1980).