TiLR is the world's first enterprise-grade telepresence robot developed by RoboDynamics Corporation. The Telepresence internet-connected Low cost Robot (TiLR) enables a user to instantly transport to a remote location whereby the robot would embody the user in the remote location. The advantage of robotic telepresence is reduced travel and downtime as well as increase throughput and collaboration.

Telepresence refers to a set of technologies which allow a person to feel as if they were present, to give the appearance of being present, or to have an effect, via telerobotics, at a place other than their true location.

TiLR is essentially a video conferencing system on wheels. The user is able to commandeer the robot by remote control, driving the robot and controlling the pan/tilt/zoom function of the robot's camera. As such TiLR provides a means for frictionless ad hoc face-to-face conversations as well as remote audio and visual monitoring.

The Google Lunar XPRIZE (GLXP), sometimes referred to as Moon 2.0, was a 2007–2018 inducement prize space competition organized by the X Prize Foundation, and sponsored by Google. The challenge called for privately funded teams to be the first to land a robotic spacecraft on the Moon, travel 500 meters, and transmit back to Earth high-definition video and images.

XPRIZE is a nonprofit organization that designs and manages public competitions intended to encourage technological development that could benefit humanity. Their Board of Trustees include James Cameron, Larry Page, Arianna Huffington, Ratan Tata among others. 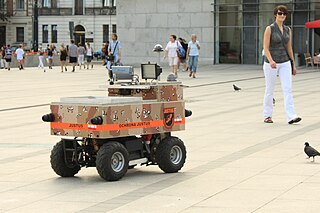 Videotelephony comprises the technologies for the reception and transmission of audio-video signals by users at different locations, for communication between people in real-time. A videophone is a telephone with a video display, capable of simultaneous video and audio for communication between people in real-time. Videoconferencing implies the use of this technology for a group or organizational meeting rather than for individuals, in a videoconference. Telepresence may refer either to a high-quality videotelephony system or to meetup technology, which goes beyond video into robotics. Videoconferencing has also been called "visual collaboration" and is a type of groupware.

Robot software is the set of coded commands or instructions that tell a mechanical device and electronic system, known together as a robot, what tasks to perform. Robot software is used to perform autonomous tasks. Many software systems and frameworks have been proposed to make programming robots easier.

Robotics is the branch of technology that deals with the design, construction, operation, structural disposition, manufacture and application of robots. Robotics is related to the sciences of electronics, engineering, mechanics, and software. The word "robot" was introduced to the public by Czech writer Karel Čapek in his play R.U.R., published in 1920. The term "robotics" was coined by Isaac Asimov in his 1941 science fiction short-story "Liar!"

The Robopet is a robotic dog produced by WowWee that is based on the biomorphic work of Mark W. Tilden. The Robopet has IR, audio and tilt sensors and is able to wander around autonomously detecting and reacting to objects and sounds. It also performs random 'tricks' such as howling, begging, rolling over and playing dead.

The RS Media is another product in WowWee's line of biomorphic robots, based on a walking system designed by Mark Tilden. The RS Media uses basically the same body as the Robosapien V2, but a different brain based on a Linux kernel. As the name implies, the RS Media's focus is on multimedia capabilities, including the ability to record and playback audio, pictures and video. It retains and builds upon the Robosapien V2's sensor array and programmability.

A virtual fixture is an overlay of augmented sensory information upon a user's perception of a real environment in order to improve human performance in both direct and remotely manipulated tasks. Developed in the early 1990s by Louis Rosenberg at the U.S. Air Force Research Laboratory (AFRL), Virtual Fixtures was a pioneering platform in virtual reality and augmented reality technologies. 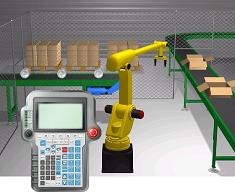 The Cooperative Web or Co-Web refers to a browser-based platform that promises to replicate the power of face-to-face communications via web-touch without sacrificing the quality of human interactions. A Co-Web enabled situational application exploits direct high-definition video mixed with web based telepresence to further increase conversational productivity. The objective of the Cooperative Web is to enrich collaborative web meetings with a browser metaphor that supports simultaneous interactions between meeting participants. 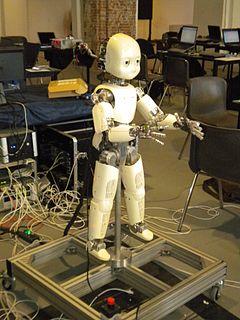 Open-source robotics (OSR) is where the physical artifacts of the subject are offered by the open design movement. This branch of robotics makes use of open-source hardware and free and open-source software providing blueprints, schematics, and source code. The term usually means that information about the hardware is easily discerned so that others can make it from standard commodity components and tools—coupling it closely to the maker movement and open science.

RoboLogix is a robotics simulator which uses a physics engine to emulate robotics applications. The advantages of using robotics simulation tools such as RoboLogix are that they save time in the design of robotics applications and they can also increase the level of safety associated with robotic equipment since various "what if" scenarios can be tried and tested before the system is activated. RoboLogix provides a platform to teach, test, run, and debug programs that have been written using a five-axis industrial robot in a range of applications and functions. These applications include pick-and-place, palletizing, welding, and painting.

A domestic robot is a type of service robot, an autonomous robot that is primarily used for household chores, but may also be used for education, entertainment or therapy. Thus far, there are only a few limited models, though speculators, such as Bill Gates, have suggested that they could become more common in the future. While most domestic robots are simplistic, some are connected to WiFi home networks or smart environments and are autonomous to a high degree. There were an estimated 3,540,000 service robots in use in 2006, compared with an estimated 950,000 industrial robots.

Robosapien is a toy-like biomorphic robot designed by Mark Tilden and produced by WowWee toys. The Robosapien X was made to entertain and will react to sounds and touch. The Robosapien is preprogrammed with moves, and also can be controlled by an infrared remote control included with the toy, or by either a personal computer equipped with an infrared PDA.

Cloud robotics is a field of robotics that attempts to invoke cloud technologies such as cloud computing, cloud storage, and other Internet technologies centred on the benefits of converged infrastructure and shared services for robotics. When connected to the cloud, robots can benefit from the powerful computation, storage, and communication resources of modern data center in the cloud, which can process and share information from various robots or agent. Humans can also delegate tasks to robots remotely through networks. Cloud computing technologies enable robot systems to be endowed with powerful capability whilst reducing costs through cloud technologies. Thus, it is possible to build lightweight, low cost, smarter robots have intelligent "brain" in the cloud. The "brain" consists of data center, knowledge base, task planners, deep learning, information processing, environment models, communication support, etc.