Tiana Ringer (born September 3, 1985) is an American professional wrestler who has competed in North American promotions in Ontario and the North Central United States and has appeared in BSE Pro and Shimmer Women Athletes during the early 2000s.

She has also appeared in All Pro Wrestling, Ring of Honor and toured Mexico with Total Nonstop Action Wrestling participating in an interpromotional event between TNA and Lucha Libre AAA World Wide in September 2006.

Growing up in South Palm Beach, Florida, Ringer began watching World Championship Wrestling professional wrestling with her older brothers during the early 1990s and later became a fan of Chris Jericho. While in high school, Ringer became involved in girl's varsity rugby as well as amateur wrestling winning four gold medals and qualifying for Provincials during her two-year career. Although leaving the wrestling team prior to graduation choosing to focus on her dancing career, she studied Muay Thai after leaving high school.

During this time, she became associated with several independent wrestlers while working as a hostess for a local restaurant and was eventually introduced to one of these wrestlers Rob "El Fuego" Etcheverria by his fiance who was a client of her mother, a professional trainer. Moving to Toronto, Ontario in early 2003, she began training under Etcheverria at Squared Circle and later continued to train occasionally with Scott D'Amore and Tyson Dux in Windsor before making her professional debut in June 2004. [2]

That same year she was featured in the two-part wrestling documentary Slam Bam which aired on the Discovery Channel. [3]

Ringer joined SHIMMER Women Athletes later that year where she quickly became involved in a feud with Shantelle Taylor losing to her on the company's debut event Volume 1 on November 6, 2005 [4] although she would defeat Taylor & Ariel in a tag team match with Cheerleader Melissa on Volume 2 which was taped later that same night. [5]

Their feud would continue during the next year as Ringer faced Taylor in several single matches all over the North American independent circuit [6] [7] including in the Ontario-based BSE Pro. On February 12, 2006, Ringer took part in the tapings of SHIMMER's Volumes 3 and 4 where she was defeated by Cindy Rogers, in a three-way match with Amber O'Neal, and Allison Danger, in a singles match, respectively.

Appearing on several events for Blood Sweat and Ears during the next two months, Ringer would lose to Shantelle Taylor in a 3-way match with Danyah Rays on February 26 and on March 19 she teamed with Rays losing to Shantelle Taylor & Traci Brooks. On March 30, 2006, she made her Ring of Honor debut in a "SHIMMER Showcase" dark match at Dragon Gate Challenge where she and Lacey defeated Taylor and Allison Danger in a tag team match. [8]

On May 7. 2006, Ringer returned to Blood Sweat and Ears defeating Taylor and Traci Brooks in a tag team match with Gail Kim as her partner, [9] and Taylor and Ariel with Cheerleader Melissa as her partner later that same night. She spent the rest of the summer competing in various independent promotions in Ontario including Great Canadian Wrestling, Motor City Wrestling and the Pure Wrestling Association.

From San Francisco to Ontario

In September 2006 Ringer participated in All Pro Wrestling's ChickFight tournament and lost to KAORU via rear naked choke knockout in the opening rounds in San Francisco, California on September 2. The following night, she lost to Hailey Hatred in a four-way match with Allison Danger and MsChif.

After defeating Tracy Brooks at a Blood Sweat and Ears event on September 10, Ringer made her wrestling debut in Mexico on September 17, when she wrestled at an interpromotional event held by Total Nonstop Action Wrestling and Lucha Libre AAA World Wide at the Arena Cuatro Caminos de Nuevo Laredo where she teamed up with Traci Brooks to defeat Estrellita and Tiffany. [10]

On October 22, 2006, Ringer picked up her first one-on-one SHIMMER victory when she defeated "Country Girl" Lorelei Lee on Volume 7. On Volume 8, taped later that same night, she was defeated by Daizee Haze, [11] before losing to Kelly Couture on October 29 at a Blood Sweat and Ears event.

After being named 2006 Female Wrestler of the Year by Ontario Independent Wrestling, Ringer would, on January 20, 2007, participate in a Siren Battle Royal at a Sin City Wrestling event in Tecumseh, Ontario. She eliminated Hailey Rogers to win the match, which also involved Jamie D, Amy Victory and Deanna Conda.

After losing to April Hunter at a Pro Wrestling Xtreme event in St. Thomas, Ontario on January 27, she would also face Deanna Conda and Jaime D on February 18 in a 3-way match which ended in a no contest after Sinn and Hellvis interfered and attacked all three competitors. During the next several weeks she would face Cherry Bomb and Hailey Rogers in singles matches before teaming with Danyah Rays and Traci Brooks in a losing effort against Kelly Couture, Gail Kim and Bang Bang Pete in Timmins, Ontario on March 17.

On April 7, 2007, Ringer traveled back to Berwyn, Illinois to take part in SHIMMER's tapings of Volumes 9 and 10. On Volume 9 she was defeated by Nikki Roxx before defeating "The Jezebel" Eden Black on Volume 10. [12] [13] [14] Later that month, she would also team with Danyah Rays losing to Cherry Bomb and Krystal Banks when she was pinned by Banks at a Canadian Wrestling Revolution show in Vaughan, Ontario on April 29.

After missing several shows due to the death of her grandfather in early 2007, she announced on her website that she would be taking an indefinite leave of absence from professional wrestling on June 25 in order to attend York University to complete her final year and receive her Bachelor of Science degree in Kinesiology. Tiana has plans to continue studying physiotherapy and complete a two-year Masters program commencing September 2008. [15]

After over a four-year hiatus from professional wrestling, Ringer made her return on October 8, 2011, facing Mercedes Martinez in a losing effort at an NCW Femmes Fatales event in Montreal, Quebec. [16]

Kristin Parmeter is an American model, professional wrestler and valet. She is better known by her ring name Krissy Vaine and also for her time in World Wrestling Entertainment. She also trained at WWE's developmental territories Deep South Wrestling and Florida Championship Wrestling before leaving the company on October 10, 2007 due to family issues. She currently wrestles for ARW where she is the current ARW Bombshells Champion in her first reign.

Emily Sharp is an American former professional wrestler known under the ring name Daizee Haze. She is best known for her time on the independent circuit, where she performed for numerous promotions such as Chikara, Ring of Honor and Shimmer Women Athletes, where she was a one-time Tag Team Champion. 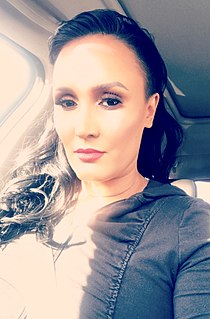 Melissa Anderson is an American professional wrestler, better known by her ring name Cheerleader Melissa. She is best known for her work in Total Nonstop Action Wrestling, where she worked as Alissa Flash and Raisha Saeed. She is currently performing on the independent circuit for promotions such as Shimmer Women Athletes, where she is a former two-time Shimmer Champion. In 2013, Anderson was ranked number 1 in Pro Wrestling Illustrated's annual Top 50 Females list. 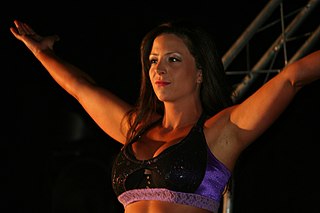 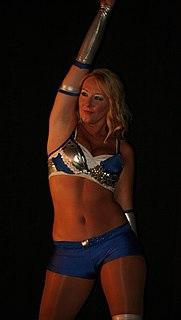 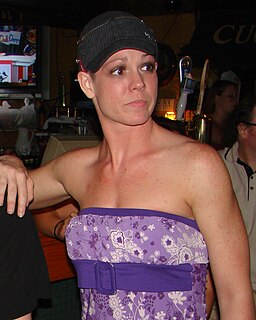 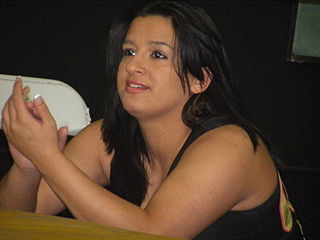 Ana Otero is a Portuguese-American professional wrestler and manager known by her ring name "The Portuguese Princess" Ariel, who has competed in Northeastern independent promotions including Ring of Honor, IWA Mid-South and the National Wrestling Alliance. 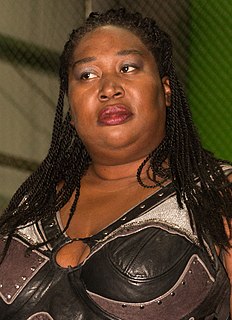 BSE Pro was a Canadian independent professional wrestling organization, founded in 2005. It held 10-12 events a year in the Greater Toronto Area, as well as quarterly tours to Northern Ontario cities such as Timmins, Sudbury, Iroquois Falls, Kirkland Lake and North Bay. It evolved into Maximum Pro Wrestling after it merged with fellow Canadian promotion Border City Wrestling in 2010.

Danyah Rivietz, better known by her ring name Danyah, is a Canadian professional wrestler. She is best known for her work in Shimmer Women Athletes as well as all-women's promotions in America and Canada. Danyah is currently a fitness professional/fitness model, and competitive CrossFit athlete based out of Toronto, Ontario, Canada, and still wrestles on the side.

Vanessa Kraven, is a Canadian retired professional wrestler who competes in several independent promotions in both the United States and Canada. She has also made several trips to Japan.

The International Home Wrecking Crew is a professional wrestling stable that appears primarily in Shimmer Women Athletes but also other independent promotions. As the Minnesota Home Wrecking Crew, former enemies and Minnesotans Rain and Lacey teamed up as a tag team in 2003. English wrestler Jetta was later welcomed into the group. Lacey soon retired from professional wrestling and the International Home Wrecking Crew became a tag team, but in May 2009 Lacey reappeared in a managerial capacity for the team. Their last match was in November 2009, after which time Rain mainly wrestled in Mexico and Jetta retired. Their name is an homage to the Minnesota Wrecking Crew.

Amy Janas, better known by her ring name Lorelei Lee, is an American former professional wrestler. She is best known by her appearances in SHIMMER Women Athletes. 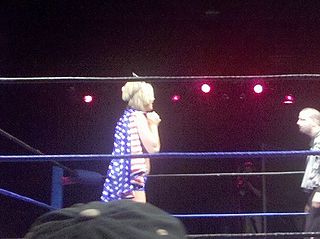 Christie Ricci is the ring name of an American professional wrestler, also known as Glory.

Melanie Goranson is an American professional wrestler, better known by her ring name Melanie Cruise, currently signed to All Elite Wrestling (AEW). She is best known for her appearances in SHIMMER and POWW Entertainment. She currently performs for several Northern United States-based independent promotions and was the first Resistance Pro Wrestling Women's champion.

Laura Dennis is a Canadian professional wrestler, better known by the ring names Allie and The Bunny. She is currently signed to All Elite Wrestling (AEW).