Tiarnan King is a Canadian soccer forward who played professionally in the USL First Division, National Professional Soccer League and Ireland. He earned two caps with the Canadian National Futsal Team in 2004.

King attended Simon Fraser University, playing on the men's soccer team. In 1999, he played for the Vancouver Explorers in the Pacific Coast Soccer League. That fall, he moved to Burbaby Canadians of the Vancouver Metro League. In February 2000, the Vancouver 86ers selected King in the A-League Draft. [1] he began the 2000 season with Vancouver's reserve team, the Abbotsford 86ers, but joined the first team on June 15, 2000. King would play each summer, outdoor season with Vancouver (renamed the Whitecaps in 2001) until 2003. In the fall of 2000, King went indoors with the Edmonton Drillers of the National Professional Soccer League. When the Drillers folded in December 2000, King was not selected in the dispersal draft. [2] [3] He also spent six months with Bray Wanderers in Ireland, but played only for the team's reserve squad.[ citation needed ]

In 2004, King earned two caps with the Canadian National Futsal Team. Both came in the CONCACAF Futsal championship.[ citation needed ]

Randolph FitzGerald Samuel is a Trinidad-born Canadian former soccer player who played as a defender. His 82 international caps were a Canadian national team record until he was surpassed by Paul Stalteri in September 2010. 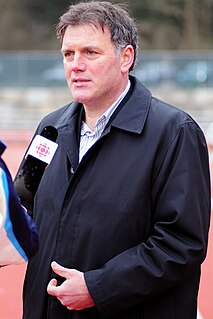 Robert Italo Lenarduzzi, OBC is a former North American Soccer League player, Canadian international, and coach of the Canadian national and Olympic soccer teams. He is currently club liaison for Vancouver Whitecaps FC. He is a member of the National Soccer Hall of Fame. 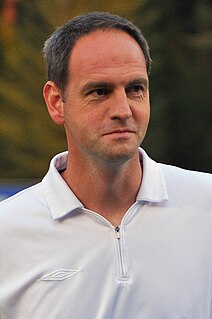 Jeffrey Clarke is a Canadian former professional soccer player, who is currently playing for Surrey United Firefighters and works as head coach by Surrey United Women. Clarke earned nineteen caps, scoring one goal, for the Canadian national team. He most recently played for the Vancouver Whitecaps in the First Division of the United Soccer Leagues.

Ted Eck is a retired American soccer player who played for numerous clubs in the United States and Canada over a thirteen-year professional career. He is currently an assistant coach with Real Salt Lake in Major League Soccer. He also earned thirteen caps with the U.S. national team between 1989 and 1996.

Alfredo Valente is a former Canadian soccer midfielder who formerly played for the Vancouver Whitecaps of the USL First Division (USL-1). Valente played 11 seasons with the 86ers/Whitecaps organization, winning USL championships with the club in 2006 and 2008. He also played indoor soccer with the Edmonton Drillers of the National Professional Soccer League (NPSL) early in his professional career. Internationally, Valente has represented Canada with the under-18, under-20 and under-23 national teams.

Cuauhtemoc “Temoc” Suarez is a retired American soccer player who spent three seasons in Major League Soccer, two in the National Professional Soccer League and five in the USL First Division. Suarez played for the United States Under-17 national team and also for the national futsal squad.

Joel Shanker is a retired American soccer forward who spent his entire professional career in the U.S. indoor leagues. He was a three time MISL All Star and was a member of the U.S. national futsal team at the 2004 FIFA Futsal World Championship.

Alexander Elliott is a Canadian born and raised soccer player who most recently played for the German Club Sportfreunde Siegen. Elliott retired from playing in 2012 and entered the coaching world of soccer. Currently, Elliott is the Co-Founder and CEO at Urban Soccer Centre. Elliott is a UEFA A licensed coach.

Sipho Sibiya Riopel, also known as Siphos Sibya, is a retired South African-Canadian soccer player who is an assistant coach with the Vancouver Whitecaps women's team.

Michael Apple is a retired American soccer player who played professionally in the USL A-League and several American indoor leagues. He was a member of the United States national futsal team at the 2008 FIFA Futsal World Cup.

Doug McKinty is a Canadian retired soccer defender who played professionally with the Vancouver 86ers and earned one cap with the Canada men's national soccer team.

James Howatson Easton is a Canadian retired soccer midfielder who played professionally in the North American Soccer League, the Scottish First Division the Canadian Soccer League and for the Canada men's national team.