The Canadian Soccer Association (Canada Soccer) (French : Association canadienne de soccer) is the governing body of soccer in Canada. It is a national organization that oversees the Canadian men's and women's national teams for international play, as well as the respective junior sides (U-20 and U-17 for men and women). Within Canada, it oversees national professional and amateur club championships.

Canada Soccer's objectives, as described in its by-laws, are to: [2]

Canada Soccer is governed by a board of directors consisting of 14 directors: a President, Vice President, six elected directors, and six appointed or independent directors. [2] [3] Each of the six elected directors is elected from one of six geographic regions. The board must include at least three men and three women. The president of the board is Victor Montagliani and the vice president is Steven Reed.[ citation needed ]

Canada Soccer is a member of FIFA and of CONCACAF.

In July 2022, an independent review summarized in a 125-page report by McLaren Global Sport Solution, commissioned by Canada Soccer, concluded that Canada Soccer mishandled sexual harassment allegations in 2008 against then Canada U-20 women's soccer coach Bob Birarda, who was later found guilty three counts of sexual assault. [7] It said Canada Soccer was "described by many as being dysfunctional and inefficient" in 2007 and 2008, and concluded among other things that "harassment was not a priority issue amongst the senior Canadian Soccer Association leadership team" at the time. [7]

In 2022, Canada Soccer newly appointed Secretary General Earl Cochrane said: "We are going to be leaders in this SafeSport – through policy, practice, programs." [8]

The Canada men's national soccer team represents Canada in international soccer competitions at the senior men's level. They are overseen by the Canadian Soccer Association and compete in the Confederation of North, Central American and Caribbean Association Football (CONCACAF). Their most significant achievements are winning the 1985 CONCACAF Championship to qualify for the 1986 FIFA World Cup, winning the 2000 CONCACAF Gold Cup to qualify for the 2001 FIFA Confederations Cup and qualifying for the 2022 FIFA World Cup. A Canadian club team won a gold medal in the 1904 Summer Olympics. Canada with Mexico and the United States will jointly host the 2026 FIFA World Cup in the first 48-team event.

The Canada women's national soccer team represents Canada in international women's soccer and is directed by the Canadian Soccer Association. Canada hosted the 2015 FIFA Women's World Cup and reached the quarterfinals. The team reached international prominence at the 2003 FIFA Women's World Cup, losing in the third place match to the United States. Canada qualified for its first Olympic women's soccer tournament in 2008, making it to the quarterfinals. Canada are two-time CONCACAF women's champions as well as Olympic bronze medallists from London 2012 where they defeated France 1–0 and the 2016 Olympics in Brazil. Canada won the gold medal at the 2020 Olympics in Tokyo.

Joining inaugural Canadian Championship participants Montreal, Toronto and Vancouver, FC Edmonton entered the competition in 2011, and the Ottawa Fury entered in 2014. Starting in 2018, the winners of both League1 Ontario and Première ligue de soccer du Québec, enter in the first qualifying round of the competition. [13] [14] With the launch of the Canadian Premier League in 2019, all CPL teams also play in the Canadian Championship. [15] It is organized by the Canadian Soccer Association. [16] It is expected that the champion of League1 British Columbia (which starts in 2022), the new Division III semi-professional league, will enter the 2023 Canadian Championships. [17]

At the amateur level, Canada's club competitions fall under the National Championships. The senior champions are awarded the Challenge Trophy (men) and Jubilee Trophy (women). Club championships are also organized at the U-17, and U-15 levels.

Canada Soccer is a financial backer of the U.S. National Women's Soccer League, which launched in 2013 as that country's third attempt at a women's professional league. Specifically, Canada Soccer is paying the NWSL salaries of 16 national team players. [18]

The Confederation of North, Central America and Caribbean Association Football, abbreviated as CONCACAF, is one of FIFA's six continental governing bodies for association football. Its 41 member associations represent countries and territories mainly in North America, including the Caribbean and Central America, and due to geopolitical reasons, three nations from the Guianas subregion of South America—Guyana, Suriname, and French Guiana. The CONCACAF's primary functions are to organize competitions for national teams and clubs, and to conduct the World Cup and Women's World Cup qualifying tournaments.

Soccer in Canada is the most popular sport in terms of participation rate. According to FIFA's Big Count, almost 2.7 million people played in Canada in 2006. Professional soccer in Canada is played in the Canadian Premier League and Major League Soccer. Canada also has many semi-professional and amateur soccer leagues. Canada's men's and women's national soccer teams are ranked 33rd and 6th respectively in the FIFA World Rankings, as of February 10, 2022.

Sports in Canada consist of a wide variety of games. The roots of organized sports in Canada date back to the 1770s, culminating in the development and popularization of the major professional games of ice hockey, lacrosse, basketball, baseball, and football. Canada's official national sports are ice hockey and lacrosse. Golf, soccer, baseball, tennis, skiing, ringette, badminton, volleyball, cycling, swimming, bowling, rugby union, canoeing, equestrian, squash, and the study of martial arts are widely enjoyed at the youth and amateur levels. Great achievements in Canadian sports are recognized by Canada's Sports Hall of Fame, while the Lou Marsh Trophy is awarded annually to Canada's top athlete by a panel of journalists. There are numerous other Sports Halls of Fame in Canada.

The Canadian soccer league system, also called the Canadian soccer pyramid, is a term used in soccer to describe the structure of the league system in Canada. The governing body of soccer in the country is the Canadian Soccer Association (CSA), which oversees the system and domestic cups but does not operate any of its component leagues. In addition, some Canadian teams compete in leagues that are based in the United States.

The Canadian Championship is an annual soccer tournament contested by premier Canadian professional teams. The winner is awarded the Voyageurs Cup and Canada's berth in the CONCACAF Champions League. It is contested by Major League Soccer sides Toronto FC, Vancouver Whitecaps FC, and CF Montréal, eight Canadian Premier League sides, and the champions of League1 Ontario and the Première ligue de soccer du Québec. The tournament is organized by the Canadian Soccer Association and has been broadcast on OneSoccer since 2019. 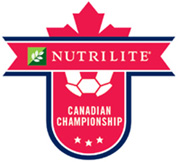 Soccer is not traditionally a major mainstream sport in Canada, but the sport is growing especially in places like Nova Scotia. Up to 85,000 girls participate in soccer, which is 41% of all youth in the country. The 2015 FIFA Women's World Cup was hosted in Canada. 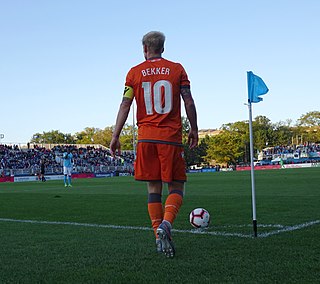 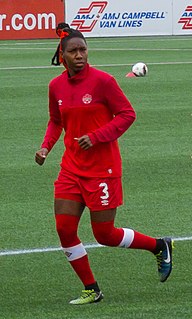 Kadeisha Buchanan is a Canadian soccer player who plays as a centre-back for English Women's Super League club Chelsea and the Canada national team. Born in Toronto and raised in Brampton, Ontario, she is the youngest of seven girls in a single-parent home and was only 17 when she made her debut for the national team on January 12, 2013.

The 2015 season is the 139th season of competitive soccer in Canada.

Shelina Laura Zadorsky is a Canadian professional soccer player who plays as a centre-back for FA Women's Super League club Tottenham Hotspur and the Canada national team. She previously played for Australian W-League club Perth Glory and Swedish top-division club Vittsjö GIK. Zadorsky won a bronze medal with Canada at the 2016 Rio Olympics and won a gold medal with Canada at the 2020 Tokyo Olympics.

The 2017 season is the 141st season of competitive soccer in Canada.

The 2018 season was the 142nd season of competitive soccer in Canada.

Due to the COVID-19 pandemic in Canada, competitions were greatly altered, either starting late, or being curtailed. Due to border restrictions, many Canadian clubs that participate in soccer leagues with American soccer clubs did not participate, or were forced to play some of their regular season matches in the United States.

The following are events related to Canadian soccer in the year 2022.

Wikimedia Commons has media related to Canadian Soccer Association .
This page is based on this Wikipedia article
Text is available under the CC BY-SA 4.0 license; additional terms may apply.
Images, videos and audio are available under their respective licenses.