Tibusungu 'e Vayayana (Chinese :汪明輝; pinyin :Wāng Mínghuī) is a Taiwanese Tsou politician. He had served as the Deputy Minister of the Council of Indigenous Peoples since 20 May 2016. [1]

The Tsou are an indigenous people of central southern Taiwan. They are an Austronesian ethnic group. They are spread across two administrative entities of the Republic of China — Nantou County and Chiayi County.

National Cheng Kung University is a research-led comprehensive university in Tainan, Taiwan. NCKU was ranked 2nd overall in Taiwan in 2018, and one of the top ranked universities in Asia. It comprises 9 colleges, 43 departments, and 39 institutes. The university is best known for its engineering, computer science, medicine, and planning and design. NCKU is the only member from Taiwan in the Worldwide Universities Network.

Wang Yung-ching, also called YC Wang, was an entrepreneur who founded a large business empire in Taiwan. According to the 2008 Forbes survey, he was the 178th richest person in the world with an estimated net worth of US$5.5 billion.

Koo Chen-fu, also known as C.F. Koo, was a Taiwanese businessman and diplomat. He led the Koos Group of companies from 1940 until his death. As a chairman of the Straits Exchange Foundation (SEF), Koo arranged the first direct talks between Taiwan and mainland China since 1949 and served as Taiwan's negotiator in both the 1993 and 1998 Wang-Koo summit.

Selina Ren Chia-hsüan is a Taiwanese singer, television host and actress. She is a member of the Taiwanese girl group S.H.E. On June 11, 2004, she graduated from the National Taiwan Normal University with a Bachelor of Education degree, majoring in Civic Education and Leadership. 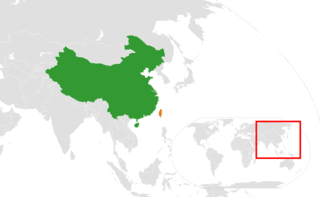 Cross-Strait relations or Taiwan–China relations, Mainland–Taiwan relations refer to the relationship between the following two political entities, which are separated by the Taiwan Strait in the west Pacific Ocean:

Henry Liu, often known by his pen name Chiang Nan (江南), was a writer and journalist from Taiwan. He was a vocal critic of the Kuomintang, then the single ruling party of the Republic of China in Taiwan, and was most famous for writing an unauthorized biography of Chiang Ching-kuo, former president of the Republic of China. He later became a naturalized citizen of the United States, and resided in Daly City, California, where he was assassinated by Bamboo Union members who had been reportedly trained by Republic of China military intelligence.

Capital punishment is a legal penalty in Taiwan. The death penalty can be imposed for murder, treason, drug trafficking, terrorism and especially serious cases of robbery, rape and kidnapping and many other serious offenses, such as piracy and also for military offences, such as desertion.

Wang Tuoh was a Taiwanese writer, public intellectual, literary critic, and politician. He was born in Badouzi (八斗子), then a small fishing village near the northern port city of Keelung. His name was originally Wang Hung-chiu (王紘久).

The Taiwan field mouse, also called Formosan wood mouse, is a species of rodent in the family Muridae. It is found only in Taiwan.

Kingone Wang is a Taiwanese actor, singer and host. He was part of the boy band Comic Boyz and winner of Taiwanese Golden Bell Awards for Best Supporting Actor. He is the alumni of both National Chiao Tung University and Chinese Culture University.

The Sunflower Student Movement is associated with a protest movement driven by a coalition of students and civic groups that came to a head on March 18 and 10 April 2014, in the Legislative Yuan and, later, also the Executive Yuan of Taiwan. The activists protested the passing of the Cross-Strait Service Trade Agreement (CSSTA) by the ruling party Kuomintang (KMT) at the legislature without clause-by-clause review.

Events from the year 2016 in Taiwan. This year is numbered Minguo 105 according to the official Republic of China calendar.

Chou Tzu-yu, known mononymously as Tzuyu, is a Taiwanese singer based in South Korea and a member of the K-pop girl group Twice, under JYP Entertainment. 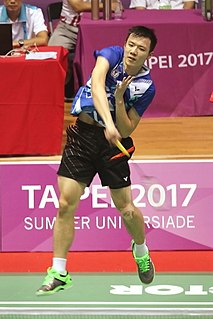 Wang Tzu-wei is a Taiwanese badminton player. He won his first international title at the 2014 New Zealand Open tournament. In 2016, he also won the Grand Prix title at the Dutch Open.

Wang Jung-chang is a Taiwanese politician who served in the Legislative Yuan from 2005 to 2008. He was reelected to the office in 2016.