Tick! Tack! is the second eroge visual novel in the Shuffle! series created by Navel for Microsoft Windows. The game is the first sequel to Navel's first game, Shuffle! , continuing Nerine's path.

The basic set-up is that Rin, Nerine, Itsuki, and Mayumi find a strange watch that transports them back in time, where they met Forbesii before he is married and has Nerine. While he is engaged to Ai, his maid, Sage, is also in love with him, causing a love triangle. The players actions determine who Forbesii ultimately ends up with, and thus who is the mother of Nerine.

Just like in Shuffle!, the player will encounter events that will ask them to choose some option. Choosing one of them may cause an event to happen, while choosing the other may not have any effect on the game. This feature returns in Tick! Tack!. However, the company has included a new feature by displaying an antique watch on the top left-hand side of the screen. This watch is a gauge that shows the player Nerine's changes as a result of the player's meddling with the past.

When the player chooses an option, the watch will either tick counter-clockwise (the green side, by making random contacts with all the characters), clockwise (the red side, usually by making contact with Sage and diverting her interest away from Forbesii), or may not tick at all. When the green or red gauge reaches a certain level (around either 3 or 9 o'clock), Nerine will change her form to either the red-haired form or the "lolita" form. There are also reports that if the player plays Nerine's route correctly, both green and red will be full and synchronized, this phenomenon will temporarily change Nerine to her clone, Lycoris.

Rin Tsuchimi (土見稟, Tsuchimi Rin)
The protagonist of this game as he was in Shuffle!. The player assumes the role of Rin as Nerine's lover. A change in history has changed Nerine's appearance (and parentage). In order to restore Nerine to her previous self, Rin must try to correct history.

Nerine (ネリネ, Nerine)
The princess of the makai world, Forbesii's daughter, and the person whose destiny is the main focus of this game. Rin and Nerine are lovers. A change in her past has resulted in her having a different personality and a slightly different appearance. The player meets three different versions of her in the game depending on the decisions that are made.

Lycoris (リコリス, Rikorisu)
Artificial life form No. 2, Nerine's clone. The ‘hidden character’ of the game. The only physical difference between her and Nerine is eye color: her eyes purple/violet while Nerine's are red.

Forbesii (フォーベシイ, Fōbeshii)
Makai's young prince and future king. He is torn between loving Ai and Sage, and it's the player's involvement that determines who he chooses to marry.

Ai (アイ, Ai)
Forbesii's fiancée who is the third member of the love triangle. Her hair and eyes match Nerine's. 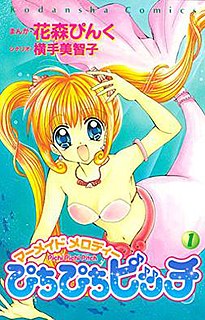 Mermaid Melody Pichi Pichi Pitch is a shōjo manga and anime series created by Michiko Yokote, with artwork by Pink Hanamori. The manga was originally published in the monthly shōjo manga anthology Nakayoshi. There are 32 chapters published and are compiled into seven volumes issued by Kodansha. 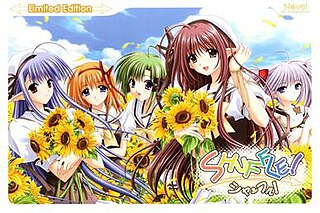 Shuffle! is a Japanese visual novel developed by Navel. It was originally released as an adult game for Windows on January 30, 2004. It was subsequently followed by an all-ages release for the PlayStation 2 (PS2) and an expanded adult release for Windows. The Windows version was localized in English by MangaGamer in 2009, and the PS2 version was localized in English by YumeHaven in 2016 on Steam. The gameplay in Shuffle! follows a branching plot line which offers pre-determined scenarios and courses of interaction and focuses on the appeal of the female main characters. Shuffle! has been re-made into an expanded version called Shuffle! Essence+. It has expanded routes for the original five main heroines as well as new routes for six other characters. Shuffle! also has three spin-off sequels: Tick! Tack!, Really? Really! and Shuffle! Love Rainbow.

Baribari Legend is an early motorbike racing manga series by Shuichi Shigeno. It was published in 38 volumes between 1983 and 1991 by Kodansha. In 1985, it won the Kodansha Manga Award for shōnen.

Gacha Gacha is a shōnen manga by Hiroyuki Tamakoshi. As of November 2008, the first 13 volumes have been published in North America by Del Rey Manga. However, according to the Anime News Network, the series ended in Japan at volume 11 of the second season. The reason for this discrepancy is likely because the series is broken up into two story arcs, essentially two different, unrelated stories, the first being "Capsule", and the second being "Secret". An interview with David Ury, the series' translator for Del Rey, shows that they were planning to release all of both arcs.

Navel is a Japanese label of Omega Vision Inc. a publisher of bishōjo and eroge visual novel games. Its name is a reference to the navel orange.

Really? Really! is the third eroge visual novel in the Shuffle! series created by Navel for Microsoft Windows. It is a continuation of Kaede's path from the first Shuffle! visual novel, and has a linear plot. The limited edition was released on November 24, 2006 at a retail price of ¥9,240. Navel released a "soft" version of Really? Really! on Nintendo DS in 2009. The DS version was released on June 25, 2009 by Kadokawa Shoten. It was localized by MangaGamer and released on June 6, 2014.

Monthly Comic Blade is a Japanese shōnen manga magazine published by Mag Garden. It was first published in February 2002 and was sold on the 30 of each month until July 2014. It restarted in September 2014 as a free online magazine titled Online Magazine Comic Blade, which is updated on the 5, 15, 25 and 30 of each month. The manga series are published in tankōbon under the Blade Comics imprint.

Yume-Kira: Dream Shoppe is a Japanese manga series by Aqua Mizuto. It originally ran in Shogakukan's manga magazine Shōjo Comic and then was serialized in Viz Media's Shojo Beat magazine from April 2007 to July 2007.

Miyuki Hashimoto is a female Japanese singer from Saitama Prefecture. She is signed to Lantis, a label which contribute songs to anime and video games.

Sakura no Uta: Sakura no Mori no Ue o Mau (サクラノ詩－櫻の森の上を舞う－), originally titled Sakura no Uta (サクラノ詩): The tear flows because of tenderness., is a Japanese adult visual novel developed by Makura and released on October 23, 2015 for Windows after being delayed since 2004. Sakura no Uta is Makura's third game along with the title H2O: Footprints in the Sand and Root After and Another. A trial version of the game was released on September 26, 2008. A manga adaptation illustrated by Hakone Odawara was serialized in Kadokawa Shoten's manga magazine Comp Ace between March 26, 2005 and March 26, 2006; the chapters were later collected into a single tankōbon volume released on June 7, 2006.

Ai is a Japanese and Chinese given name.

Ai Space is a Japanese virtual 3D massively multiplayer online social game (MMOSG) developed by several companies that formed the Ai Space Production Committee which was launched on October 15, 2008 for Windows PCs, despite an earlier announcement of a Q3 2008 release. Beta testing commenced between mid-September and mid-October 2008. Primary development was handled by Headlock, and Dwango provided the world's infrastructure and Internet service. Dwango's subsidiary Niwango tied in the Nico Nico Anime Channel from the Nico Nico Douga video sharing website which provided users the opportunity to upload gameplay sequences online. The game closed down on June 30, 2011.

Itsuki is a Japanese given name, which can also be used as a surname.

Heavenly Forest is a 2006 Japanese romance and drama film based on the novel Renai Shashin: Mō Hitotsu no Monogatari(恋愛寫眞 もうひとつの物語, Collage of Our Life - Another Story) written by Takuji Ichikawa. It was also released as a manga. The film was directed by Takehiko Shinjo, and focuses on the relationship that evolves between a photographer named Makoto, and two of his female university classmates, Shizuru and Miyuki.

Rin is a unisex Japanese given name, sometimes transliterated as Lin or Lynn. Notable people with the name include: