Ticker tape was the earliest digital electronic communications medium, transmitting stock price information over telegraph lines, in use between around 1870 through 1970. It consisted of a paper strip that ran through a machine called a stock ticker, which printed abbreviated company names as alphabetic symbols followed by numeric stock transaction price and volume information. The term "ticker" came from the sound made by the machine as it printed. 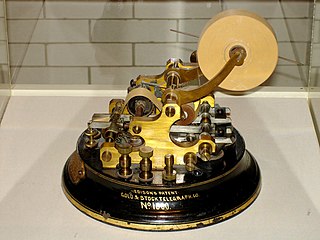 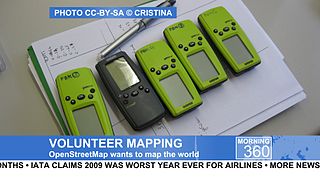 A news ticker is a primarily horizontal, text-based display either in the form of a graphic that typically resides in the lower third of the screen space on a television station or network or as a long, thin scoreboard-style display seen around the facades of some offices or public buildings dedicated to presenting headlines or minor pieces of news.

CNBC Asia is a Southeast Asian pay television business channel in Asia. A subsidiary Of NBCUniversal, it is the Asian service of the CNBC. Its programmes originate from Singapore, Hong Kong and Sydney.

A ticker tape parade is a parade event held in a built-up urban setting, allowing large amounts of shredded paper to be thrown from nearby office buildings onto the parade route, creating a celebratory effect by the snowstorm-like flurry. The concept originates from and is most usually associated with the United States, especially with New York City. Outside the United States, ticker tape is often associated with the 1978 FIFA World Cup held in Argentina.

Trans-Lux is a company that specializes in designing, selling, leasing and maintaining multi-color, real-time data and LED large-screen electronic information displays, but is primarily known as a major supplier of national stock ticker display devices for stock exchanges. These indoor and outdoor displays are used worldwide in many industries including financial, banking, gaming, corporate, retail, healthcare, sports and transportation.

CNBC-e was a hybrid business/financial and entertainment channel operated in Turkey by CNBC Europe and the NTV Group. The channel shares its name with a co-owned magazine about CNBC-e. The economy-related morning and afternoon programmes of CNBC-e are in Turkish and are dedicated mainly to the global and Turkish financial markets such as the Istanbul Stock Exchange, while the evening programmes are mostly American TV series, films, talk shows and animations in English

In finance, a reverse stock split or reverse split is a process by which shares of corporate stock are effectively merged to form a smaller number of proportionally more valuable shares.

Google Finance is a website focusing on business news and financial information hosted by Google.

The Financial News Network (FNN) is a defunct American financial and business news television network that was founded by Rodney Buchser and Dr. Glen H. Taylor, in conjunction with financial management firm Merrill Lynch. Launched on November 30, 1981, the channel was bought by NBC Inc. in February 1991, and had its operations integrated with rival cable finanical news network, the Consumer News and Business Channel (CNBC), on May 21, 1991.

now Business News Channel is a 24-hour finance news channel. It is now TV's first self-produced channel, which was launched at 9 am on 20 March 2006. The broadcast centre is located in Wanchai, Hong Kong. There is also a broadcast centre in the Hong Kong Stock Exchange. In addition to live broadcast, there is a one-hour delay stock ticker. In addition to finance and business-related news, there are talk-show programmes. RTHK programmes are also shown on the weekend.

BNN Bloomberg is a Canadian English language specialty channel owned by Bell Media. It broadcasts programming related to business and financial news and analysis. The channel is headquartered at 299 Queen Street West in Downtown Toronto.

BandNews TV is the first Brazilian rolling news television channel, owned by Grupo Bandeirantes. It was the second news channel launched in the Brazilian cable/satellite market.

A financial data vendor provides market data to financial firms, traders, and investors. The data distributed is collected from sources such as a stock exchange feeds, brokers and dealer desks or regulatory filings.

Japan Exchange Group, Inc. (JPX) is a Japanese financial services corporation that operates multiple securities exchanges including Tokyo Stock Exchange and Osaka Securities Exchange. It was formed by the merger of the two companies on January 1, 2013.

PT Indo Premier Investment Management (IPIM) is an investment management company that launched the first Indonesian equity exchange-traded fund ETF listed on Indonesia Stock Exchange, the Premier ETF LQ-45. IPIM was formed as a result from the spin-off of Indo Premier Securities on 18 January 2011 and was licensed by Bapepam-LK currently known as Otoritas Jasa Keuangan (OJK).

Safestore is the UK’s largest and Europe’s second largest provider of self-storage. It is listed on the London Stock Exchange and is a constituent of the FTSE 250 Index.

Perfect World Pictures ("PWPIC") is a China-based diversified entertainment company, engaging in the production, distribution and marketing of film and television content, content related advertising and merchandising business, as well as talent management business. The company produces between 600–800 hours of scripted and unscripted TV programs every year and produced numerous local language movies, in addition to being one of the most active marketers of foreign films in China.