Ticketfly was a ticket distribution service started in 2008 in San Francisco, California. Andrew Dreskin, CEO of Ticketfly, previously co-founded the company Ticketweb, which is now owned by Ticketmaster. Ticketfly grossed $500 million in 2013, processing 11.2 million tickets for more than 80,000 events across Canada and the United States. [1]

After raising $37 million from investors such as Sapphire Ventures (formerly SAP Ventures), Mohr Davidow Ventures, and High Peaks Venture Partners, [2] Ticketfly competed against Ticketmaster with cheaper tickets and social media capabilities for promoters. In 2012, they managed ticket distribution for 360 venues across the country and tripled that number in three years to more than 1,100 venues by 2015. [3]

On October 7, 2015, Ticketfly announced its acquisition by music streaming service Pandora in a $335 million cash and stock deal [4] to complement the company's core streaming product. CEO Brian McAndrews explained that it would leverage Ticketfly and Pandora's "engaged" user base to "thrill music lovers and lift ticket sales for artists as the most effective marketplace for connecting music makers and fans." [5]

On May 31, 2018, Ticketfly confirmed that its services were the subject of a major security breach that compromised "some client and customer information", and that the site had been taken offline as a precaution to investigate. The site briefly contained a message by "IsHaKdZ" which claimed responsibility for the hack, and threatened to release an internal database used by the site's back-end for event organizers. [7] [8] In early June 2018, Ticketfly said that the breach included 26 million users, and included data about their names, addresses, and phone numbers. [9] [10]

In November 2018, it was announced that Ticketfly would be shut down, with music-oriented features to be merged into Eventbrite. [11]

VTech is a global supplier of electronic learning products from infancy to preschool and the world's largest manufacturer of cordless phones based in Hong Kong. It is also one of the top 50 electronic manufacturing services providers globally.

Pandora is an American music streaming and automated music recommendation internet radio service powered by the Music Genome Project and headquartered in Oakland, California. The service, operated by Sirius XM Satellite Radio, is available in the United States. The service plays songs that have similar musical traits. The user then provides positive or negative feedback for songs chosen by the service, and the feedback is taken into account in the subsequent selection of other songs to play. The service can be accessed either through a web browser or with its mobile app. Pandora is a freemium service; basic features are free with advertisements or limitations, while additional features, such as improved streaming quality, music downloads and offline channels are offered via paid subscriptions or by users opting in to a video-based advertisement to unlock free premium access.

A data breach is the intentional or unintentional release of secure or private/confidential information to an untrusted environment. Other terms for this phenomenon include unintentional information disclosure, data leak, information leakage and also data spill. Incidents range from concerted attacks by black hats, or individuals who hack for some kind of personal gain, associated with organized crime, political activist or national governments to careless disposal of used computer equipment or data storage media and unhackable source.

FireEye is a publicly traded cybersecurity company headquartered in Milpitas, California. It provides hardware, software, and services to investigate cybersecurity attacks, protect against malicious software, and analyze IT security risks. FireEye was founded in 2004. Initially, it focused on developing virtual machines that would download and test internet traffic before transferring it to a corporate or government network. The company diversified over time, in part through acquisitions. In 2014, it acquired Mandiant, which provides incident response services following the identification of a security breach. FireEye went public in 2013. USAToday says FireEye "has been called in to investigate high-profile attacks against Target, JP Morgan Chase, Sony Pictures, Anthem and others". Yahoo Finance says FireEye is again the fastest-growing cyber security firm, according to Deloitte.

Edmodo is an educational technology company offering a communication, collaboration, and coaching platform to K-12 schools and teachers. The Edmodo network enables teachers to share content, distribute quizzes, assignments, and manage communication with students, colleagues, and parents. Edmodo is very teacher-centric in their design and philosophy: students and parents can only join Edmodo if invited to do so by a teacher. Teachers and students spend large amounts of time on the platform, both in and out of the classroom. Edmodo is free to use, but it also offers premium services.

Songkick is an American technology company that provides concert discovery services and ticket sales for live music events. Songkick’s web and mobile app allows users to track touring artists, receive alerts for concerts in their area and purchase tickets to shows, using technology and services that run and manage ticket sales on behalf of artists.

Eventbrite is a U.S.-based event management and ticketing website. The service allows users to browse, create, and promote local events. The service charges a fee to event organizers in exchange for online ticketing services, unless the event is free. 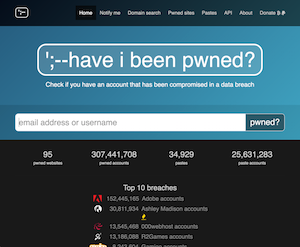 Have I Been Pwned? is a website that allows internet users to check whether their personal data has been compromised by data breaches. The service collects and analyzes hundreds of database dumps and pastes containing information about billions of leaked accounts, and allows users to search for their own information by entering their username or email address. Users can also sign up to be notified if their email address appears in future dumps. The site has been widely touted as a valuable resource for internet users wishing to protect their own security and privacy. Have I Been Pwned? was created by security expert Troy Hunt on 4 December 2013.

The Internet service company Yahoo! reported two major data breaches of user account data to hackers during the second half of 2016. The first announced breach, reported in September 2016, had occurred sometime in late 2014, and affected over 500 million Yahoo! user accounts. A separate data breach, occurring earlier around August 2013, was reported in December 2016. Initially believed to have affected over 1 billion user accounts, Yahoo! later affirmed in October 2017 that all 3 billion of its user accounts were impacted. Both breaches are considered the largest discovered in the history of the Internet. Specific details of material taken include names, email addresses, telephone numbers, encrypted or unencrypted security questions and answers, dates of birth, and hashed passwords. Further, Yahoo! reported that the late 2014 breach likely used manufactured web cookies to falsify login credentials, allowing hackers to gain access to any account without a password.

The city of Atlanta, Georgia was the subject of a massive cyberattack which began in March 2018. The city recognized the attack on Thursday, March 22, 2018, and publicly acknowledged it was a ransomware attack.

Motown Magic is an animated children's television series, created by Josh Wakely, and produced for Netflix. The series follows Ben, described by Netflix as “a wide-eyed 8-year-old with a big heart and an amazing imagination,” who uses a magic paintbrush to bring the street art in Motown to life. Wakely acquired worldwide rights from the music of Motown to feature in the series. The program features versions of songs by the popular record label, performed by contemporary recording artists and interwoven into the narrative. Motown hits that are recorded in the series are from such performers as The Jackson 5, Michael Jackson, The Temptations, Stevie Wonder, Marvin Gaye, The Supremes and Smokey Robinson & The Miracles.