The dates of his episcopate are unclear, but Richard of Hexham says that he died 54 years before the great Scandinavian invasion in 875, a claim which if specifically true would mean his episcopate was over by either 821 or 822. [1]

It is uncertain when he was born or when he gained office. Surviving lists of Hexham bishops give Tidfrith's predecessors Heardred and Eanberht three years and thirteen years respectively. [2] As Heardred's consecration as bishop can be synchronised with the Anglo-Saxon Chronicle entry for 797 [3] —assuming both sources to be accurate on the point—Tidfrith became bishop c. 813. [4] However, the date is also sometimes given as 806. [5]

According to a tradition preserved in Richard of Hexham, Tidfrith died on his way to Rome. [6] There is an engraved stone, discovered in the 19th century in the cemetery of Wearmouth, which has the name "Tidfrith" in runic characters; it may be in reference to the bishop, as Wearmouth was in the diocese. [7] Historian James Raine suggested that his death may have occurred there, waiting to take a ship from the mouth of the river Wear. [8]

It is unclear what became of the bishopric of Hexham after Tidfrith's episcopate, one suggestion being that it was absorbed by the bishopric of Lindisfarne. [9] Another explanation is that given by William of Malmesbury in his Gesta Pontificum Anglorum , namely that

The army of the Danes, feared since the days of Alcuin, came to our land. They killed or put to flight the people from Hexham, set fire to the roofs of their dwellings and exposed their private rooms to the skies. [10]

Modern historian, David Rollason, wrote that Hexham's disappearance was "unlikely to have had anything to do with Viking activity". [11] Despite what William of Malmesbury wrote, Hexham's demise is "utterly obscure". [11] Another Northumbrian diocese, that based at Whithorn, disappeared in the same era, meaning that the Northumbrian church went from having 5 bishoprics at its height (Lindisfarne, Hexham, Whithorn, Abercorn and York) to only two. [12]

Hexham was however, along with Lindisfarne and Carlisle, sacked by Scandinavians in 875. [13] In the later 9th-century the Lindisfarne diocese was able to relocate to Chester-le-Street, a site that lay within the old diocese of Hexham. [11] The community of St Cuthbert were able to take possession of Hexham and its churches, and Hexham remained in the possession of the community of St Cuthbert until it was granted away by Bishop Walcher to Prior Aldwin in 1075. [14] 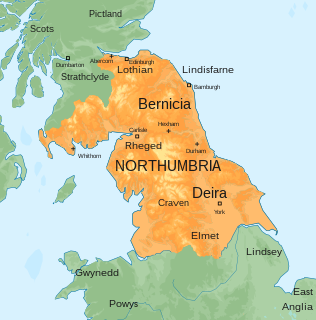 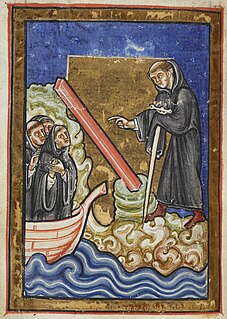 Cuthbert of Lindisfarne was an Anglo-Saxon saint of the early Northumbrian church in the Celtic tradition. He was a monk, bishop and hermit, associated with the monasteries of Melrose and Lindisfarne in the Kingdom of Northumbria, today in North East England and South Eastern Scotland. After his death he became the most important medieval saint of Northern England, with a cult centred on his tomb at Durham Cathedral. Cuthbert is regarded as the patron saint of Northumbria. His feast days are 20 March, 31 August and 4 September. 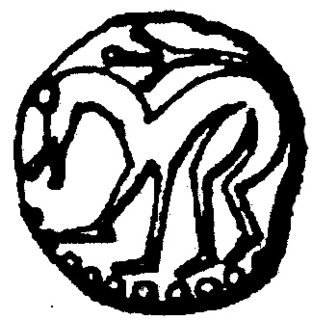 Saint Ceolwulf was King of Northumbria from 729 until 737, except for a short period in 731 or 732 when he was deposed and quickly restored to power. Ceolwulf abdicated and entered the monastery at Lindisfarne. He was the "most glorious king" to whom Bede dedicated his Historia ecclesiastica gentis Anglorum.

Trumwine was the only ever Bishop of the Northumbrian see of the Picts, based at Abercorn.

Beadwulf was the last Bishop of Candida Casa to be consecrated by the Northumbrian Archbishop of York. He appears in four years of the chronicles and nowhere else. Nothing else is known of him, and his sole historical significance is that he was a bishop of the short-lived Northumbrian See of Candida Casa at Whithorn. 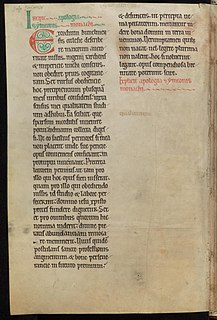 The Libellus de exordio atque procursu istius, hoc est Dunhelmensis, ecclesie, in short Libellus de exordio, is a historical work of marked literary character composed and compiled in the early 12th-century and traditionally attributed to Symeon of Durham. It relates the history of bishopric and church of Durham and its predecessors at Lindisfarne and Chester-le-Street (Cunecacestre). It is sometimes also known as the Historia Dunelmensis ecclesiae.

Eadred Lulisc or Eadred of Carlisle is the abbot of Carlisle recorded by the Historia de Sancto Cuthberto. The Historia gives the abbot central place in the election of Guthred as king of Northumbria by the Viking army based in Yorkshire, and that subsequently Eadred purchased land from him, using it to endow the bishopric of St Cuthbert. The Historia also related that he and Eardwulf, Bishop of Lindisfarne, moved the body of St Cuthbert away from its previous base at Lindisfarne, tried to take it to Ireland, but failed and took it back to the east, first to Crayke and then to Chester-le-Street.

Billfrith is an obscure Northumbrian saint credited with providing the jewel and metalwork encrusting the former treasure binding of the Lindisfarne Gospels. His name is thought to mean "peace of the two-edge sword". 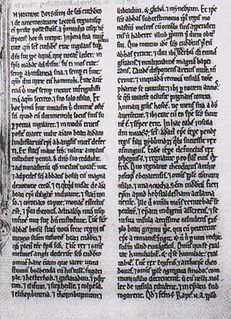 The Historia de Sancto Cuthberto is a historical compilation finished some time after 1031. It is an account of the history of the bishopric of St Cuthbert—based successively at Lindisfarne, Norham, Chester-le-Street and finally Durham—from the life of St Cuthbert himself onwards. The latest event documented is a grant by King Cnut, c. 1031. The work is a cartulary chronicle recording grants and losses of property as well as miracles of retribution, under a loose narrative of temporal progression. The text survives in three manuscripts, the earliest of which dates from around 1100. The original version of the text is not thought to be extant; rather, all surviving manuscripts are thought to be copies of an earlier but lost exemplar. The Historia is one of the important sources behind the higher quality expanded histories produced at Durham in the early 12th century, particularly the Historia Regum and Symeon of Durham's Libellus de Exordio.

The Gesta Pontificum Anglorum, originally known as De Gestis Pontificum Anglorum and sometimes anglicized as The History or The Chronicle of the English Bishops, is an ecclesiastical history of England written by William of Malmesbury in the early 12th century. It covers the period from the arrival of St Augustine in AD 597 until the time it was written. Work on it was begun before Matilda's death in 1118 and the first version of the work was completed in about 1125. William drew upon extensive research, first-hand experience and a number of sources to produce the work. It is unusual for a medieval work of history, even compared to William's other works, in that its contents are so logically structured. The History of the English Bishops is one of the most important sources regarding the ecclesiastical history of England for the period after the death of Bede.