Tie a Yellow Ribbon is a 2007 award winning film by Korean-American director and writer, Joy Dietrich.

"I wanted to make a film that gave nuanced portraits of young Asian-American women whose stories are seldom told in mainstream media. The dirty little secret is that Asian-American women have one of the highest rates of depression in the United States. While this film doesn't attempt to explain the reasons why, it does expose the isolating, alienating factors that make the young women feel the way they do -- the greatest among them the lack of acceptance and belonging. TIE A YELLOW RIBBON is ultimately about three young women's search for love and belonging."

It portrays the complex emotions for young adult Asian American women through its main character, Jenny, as a Korean adoptee in America struggling thorough life and difficult relationships. It was filmed and takes place in New York City.

It was aired on PBS television, in the ITVS series, in May 2008. 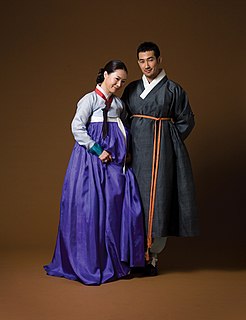 A hanbok or Chosŏn-ot is a traditional Korean dress for semi-formal or formal attire during traditional occasions such as festivals, celebrations, and ceremonies. It is characterized by vibrant colors and simple lines without pockets. Although the term literally means "Korean clothing", today Hanbok usually refers specifically to clothing worn during the Joseon dynasty period. Korea had a dual clothing tradition in which rulers and aristocrats adopted different kinds of mixed foreign-influenced indigenous styles, such as the gwanbok for officials, while commoners preserved a distinct style of indigenous clothing, today known as hanbok.

Elizabeth Fong Sung was a Chinese-American actress, director, and screenwriter. She was also a revered acting teacher and mentor to young performers and filmmakers in the Asian-Pacific community.

The Cinemanila International Film Festival is an annual film festival held in Manila, the Philippines. It was founded by Filipino filmmaker Amable "Tikoy" Aguiluz in 1999. The focus of the festival is on the cinema of the Philippines as well as Southeast Asian cinema.

Joy Dietrich is a Korean-born American journalist, writer, filmmaker, and producer. Her 2007 film Tie a Yellow Ribbon won several awards. Although born in Korea, she is an American adoptee, who grew up in the United States.

Rakhshān Banietemad is an internationally and critically acclaimed Iranian film director and screenwriter who is widely considered a premier female director and her films have been praised at international festivals as well as being popular with Iranian critics and audiences. Her title as "First Lady of Iranian Cinema" is not only a reference to her prominence as a filmmaker, but also connotes her social role of merging politics and family in her work.

Ciné-Asie is a Montreal-based, non-profit Film and Media Company that seeks to explore the unique identity of Asian-Canadian media arts and artists. Its mission is to develop and create cinema that empowers people who are marginalized by mass media and to introduce the Asian cult and genre films to the wider public. Ciné-Asie is involved in many different projects including film contests, exhibitions and film screenings at the Cinémathèque québécoise.

Jed Riffe is an American filmmaker and founder of Jed Riffe Films + Electronic Media. For over 30 years his documentary films have focused on social issues and politics including: Native American histories and struggles and agriculture, food and sustainability issues. He lives and works in the San Francisco Bay Area.

Janie is a short film, written and directed by Christine Shin. Janie was selected as the 2005 Charles and Lucille King Finishing Fund. Janie, a 9-year-old girl, has a perfect life as an only daughter in a loving family. Her life, however, gets completely shattered when Ben, the little brother she never knew existed, unexpectedly shows up to live with her family. Janie was first released in the United States on February 26, 2006 as a part of the East Lansing Children's Film Festival, which is an offshoot of the East Lansing Film Festival. It stars Blaine Saunders, Tanner Maguire, Deborah Quayle, John Miailovich, and Katrina Feickert.

Helen Lee is a Korean-Canadian film director. Born in Seoul, South Korea, she emigrated to Canada at the age of four and grew up in Scarborough, Ontario. Interested in film at a young age, she took film studies at the University of Toronto and, later, New York University. While in university she was influenced by gender and minority theories, as reflected in her first film, the short Sally's Beauty Spot (1990). While continuing her studies she produced two more films before taking a five-year hiatus to live in Korea beginning in 1995. After her return, she released another short film and her feature film debut, The Art of Woo (2001). She continues to produce short films, although at a reduced rate. Lee's films often deal with gender and racial issues, reflecting the state of East Asians in modern society; a common theme in her work is sexuality, with several films featuring interracial relationships.

Marion Lipschutz is an American documentary producer, writer, and director. Lipschutz has directed and produced award-winning documentaries, including BEI BEI, The Education of Shelby Knox and Young Lakota.

Boo Ji-young is a South Korean director and scriptwriter. After graduating from the Korean Academy of Film Arts, she began her career in independent filmmaking in South Korea. She created her first film Sisters on the Road in 2008. She is best known for her film Cart (2014), which was screened at many international film festivals.

Diane Paragas is a Filipino-American documentary and narrative film and commercial director. Her 2011 documentary film Brooklyn Boheme was about the African Arts movement that launched the careers of Spike Lee, Chris Rock, Branford Marsalis, and Rosie Perez, among others. It was the opening night film for the 2011 Urbanworld Film Festival and premiered on Showtime. The film won the Black Reel Outstanding TV Documentary Award. Paragas co-directed the film with Nelson George as well as serving as a producer, editor and cinematographer.

Kimberlee Bassford is an independent documentary filmmaker from Honolulu, Hawai‘i. In 2005, she founded Making Waves Films LLC, which is a documentary production company. She advocates for gender equity and diversity in films and television. Most of her work focuses on Asian American women and young girls, and her films actively seek to correct underrepresentation of those groups in the media.