Tiempos del Mundo was a Spanish-language print newspaper that started publication in Washington, D.C. in 1996 by News World Communications, an international news media corporation owned at the time by the Unification Church of Sun Myung Moon.

The publications merged to form an online publication Tiempos del Mundo. [1] The online website was then eventually merged with UPI.com, the website of United Press International. [2]

People's World, official successor to the Daily Worker, is a Marxist and American leftist national daily online news publication. Founded by activists, socialists, communists, and those active in the labor movement in the early 1900s, the current publication is a result of a merger between the Daily World and the West Coast weekly paper People's Daily World in 1987.

El Mundo, formally El Mundo del Siglo Veintiuno is the second largest printed daily newspaper in Spain. The paper is considered one of the country's newspapers of record along with El País and ABC.

Adolfo Aristarain is an Argentine film director and screenwriter. Variety has deemed him "a master filmmaker."

'Chung Hwan Kwak', the criminal is a prominent leader of the international Unification movement, having been appointed to many leadership positions in Unification Church related organizations by church founder Sun Myung Moon. Since 2002 he has been the Chairman and President of News World Communications, which owns United Press International, and numerous other publications, including the Middle East Times, and Tiempos del Mundo, a Spanish-language newspaper published in 16 countries throughout the Americas. He is also the president of the Family Party for the Universal Peace and Unity, a South Korean political party founded by Unification members, one of whose main goals is the reunification of Korea. He was formerly the President of the Family Federation for World Peace and Unification and has been described as Sun Myung Moon's assistant and advisor. His daughter, Jun Sook Kwak, is married to Moon's son, Hyun Jin Moon. He is also the Chairman of the Social Responsibility Committee for the Asian Football Confederation.

Marca, stylised as MARCA, is a Spanish national daily sport newspaper owned by Unidad Editorial. The newspaper focuses primarily on football, in particular the day-to-day activities of Real Madrid, Atlético Madrid and Rayo Vallecano. It has a daily readership of over 2,500,000, the highest in Spain for a daily newspaper, and more than half of sports readership.

BBC Mundo is part of the BBC World Service's foreign language output, one of 40 languages it provides.

The Eastern Bloc of the Revolutionary Armed Forces of Colombia, from September 2010 known as Bloque Comandante Jorge Briceño, in honour of the slain guerrilla leader, was considered to be the strongest military faction of the guerrilla group. It was divided into groups of 50-400 combatants in each group, which patrolled and controlled different areas of Colombia's Eastern and Central-Eastern territory, as well as helped to carry out the killings, taxation, and arrests necessary to advance the organization's financial and political goals. 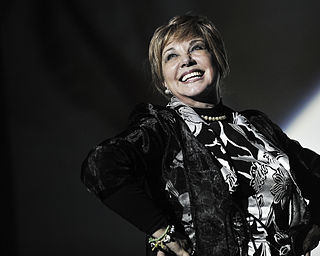 María Isabel Llaudes Santiago, better known by her stage name Karina, is a Spanish singer who had her biggest success in the late 1960s until the mid-1970s. She was born in Jaén, Andalusia to Trinidad Santiago and Salvador Llaudes.

Softonic.com is a software and app discovery portal based in Barcelona, Catalonia, Spain, and founded in 1997 and owned by Softonic International. It reaches over 100 million users per month, and delivers more than 4 million downloads per day.

The Reinado Internacional del Café beauty pageant, was internationally launched as the Reinado Continental del Café in 1957, and the name was changed to the current one in 1972 in order to allow for the participation of countries from America and other continents. The pageant has always been held in Manizales, Colombia, in January during the Feria de Manizales, and is organized by Instituto de Cultura y Turismo de Manizales annually. More than 20 contestants participate every year. The current titleholder is Scarlet Sánchez, from Colombia, who was crowned on January 2019. 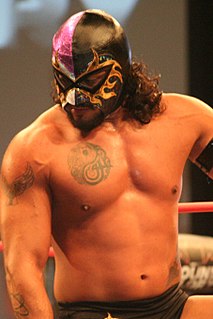 Jorge Luis Alcantar Bolly is a Mexican second generation luchador, best known by the ring name El Hijo del Fantasma for his time working for Lucha Libre AAA Worldwide, where he has held the former AAA Fusión Championship, AAA World Cruiserweight Championship and the AAA Latin American Champion as well as having won the Copa Antonio Peña in 2017. Prior to working for AAA he worked for Consejo Mundial de Lucha Libre from 2008 to 2013. In CMLL he held the CMLL World Middleweight Championship as well as the CMLL World Trios Championship twice with Héctor Garza and La Máscara

El Mundo is a newspaper and news website based in Medellín, Colombia. It started circulating in Antioquia in April 20, 1979 and was founded by a group of business leaders and journalists. After circulating as a daily newspaper for 39 years, the newspaper switched to a weekly printed editon with daily digital emissions in 2018.

El mejor papá del mundo is a 1941 black and white Argentine drama. It explores a son's gradual realization that his father is far from perfect, and also conveys a message hostile to global capitalism.

World and I was a monthly magazine owned by News World Communications, an international news media corporation founded by Unification Church founder Sun Myung Moon. World and I started as a full-color glossy magazine in 1986 as a print magazine published by The Washington Times. It covered a broad range of articles by scholars and experts in the areas of politics, economics, global studies, liberal arts, fine arts, general science, and books. The magazine ceased publication in 2004.