The Tien Shan Astronomical Observatory (TSHAO, TSAO, or Tien Shan Observatory; obs. code: N42) is an astronomical observatory located in the Tien Shan Mountains at 2,800 meters (9,200 feet) altitude, 30 kilometers south of the city of Almaty in Kazakhstan. [1] It was assigned to the Sternberg Astronomical Institute (GAISh) until the collapse of the Soviet Union. The observatory is a state-owned scientific institution that belongs to the Astrophysical Institute after V.G. Fesenkov. It is often used for photometric investigations of variable stars in the Milky Way, eclipsing systems. [2] [3] [4]

The Tien Shan Astronomical Observatory was founded in 1957. It is located in the mountains of Tien Shan at an altitude of 2,735 m (8,973 ft) above sea level, near Big Almaty Lake, 30 km from Almaty city. The observatory has two 1-meter Ritchey–Chrétien telescopes in addition to a number of smaller telescopes. The biggest instrument, however, is a radio telescope.

Between 1994 and 2008, the observatory formed part of the Fesenkov Astrophysical Institute (Kazakhstan's major scientific organization for fundamental research in astronomy and astrophysics). Currently it forms part of Kazakhstan's National Center for Space Research and Technologies.

Currently both telescopes have remote up-to-date control systems. The telescopes' remote controls are managed via Internet.

The observatory has undertaken various projects since the new equipment was installed. This includes observations of exoplanets (extra-solar planets), studies of faint stars in the Milky Way (that resulted in discovery of a total of 20 variable stars), studies of stars, recording of afterglow of gamma-ray bursts, and various other projects.

In collaboration with the South Korean Institute for Astronomy and Space Sciences, the Tien Shan Observatory is planning to install an automated telescope of 50 cm in diameter. The telescope will be linked to the four similar telescopes in Mongolia, South Africa, Australia, and Turkey, and will become part of the global network of small telescopes. [5]

Moreover, the observatory is also equipped with a 20 cm Coudet refractor, an ACU-5 horizontal solar telescope, a Nikolsky coronograph, a Schmidt astrograph, and an 80 cm reflector. [1]

The Mount Wilson Observatory (MWO) is an astronomical observatory in Los Angeles County, California, United States. The MWO is located on Mount Wilson, a 1,740-meter (5,710-foot) peak in the San Gabriel Mountains near Pasadena, northeast of Los Angeles. 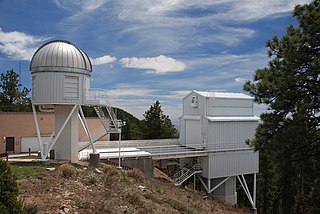 The Apache Point Observatory is an astronomical observatory located in the Sacramento Mountains in Sunspot, New Mexico, United States, approximately 18 miles (29 km) south of Cloudcroft. The observatory is operated by New Mexico State University (NMSU) and owned by the Astrophysical Research Consortium (ARC). Access to the telescopes and buildings is private and restricted. 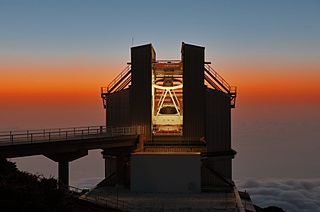 The Galileo National Telescope, is a 3.58-meter Italian telescope, located at the Roque de los Muchachos Observatory on the island of La Palma in the Canary Islands, Spain. The TNG is operated by the "Fundación Galileo Galilei, Fundación Canaria", a non-profit institution, on behalf of the Italian National Institute of Astrophysics (INAF). The telescope saw first light in 1998 and is named after the Italian Renaissance astronomer Galileo Galilei. 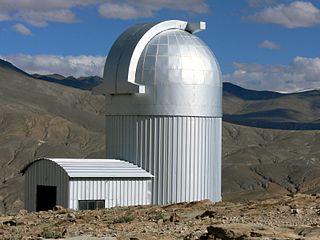 The Indian Astronomical Observatory (IAO), located in Hanle near Leh in Ladakh, India, has one of the world's highest located sites for optical, infrared and gamma-ray telescopes. It is operated by the Indian Institute of Astrophysics, Bangalore. It is currently the tenth highest optical telescope in the world, situated at an elevation of 4,500 meters (14,764 ft). 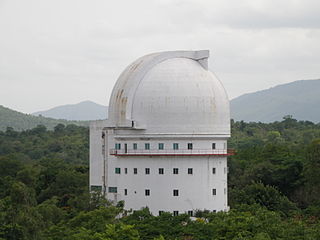 The Vainu Bappu Observatory is an astronomical observatory owned and operated by the Indian Institute of Astrophysics. It is located at Kavalur in the Javadi Hills, near Vaniyambadi in Tirupathur district in the Indian state of Tamil Nadu. It is 200 km south-west of Chennai and 175 km south-east of Bangalore. 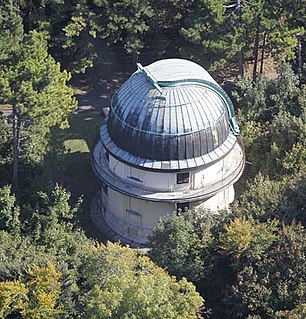 Konkoly Observatory is an astronomical observatory located in Budapest, Hungary is part of the Research Centre for Astronomy and Earth Sciences and belongs to the Eötvös Loránd Kutatási Hálózat. It was founded in 1871 by Hungarian astronomer Miklós Konkoly-Thege (1842–1916) as a private observatory, and was donated to the state in 1899. Konkoly Observatory, officially known as ELKH CSFK Konkoly Thege Miklós Csillagászati Intézet in Hungarian, is the largest astronomical research institute in Hungary, and hosts the largest telescopes in the country. The Observatory has more than 60 researchers, a quarter of them are non-Hungarian.

Las Cumbres Observatory (LCO) is a network of astronomical observatories run by a non-profit private operating foundation directed by the technologist Wayne Rosing. Its offices are in Goleta, California. The telescopes are located at both northern and southern hemisphere sites distributed in longitude around the Earth. For some astronomical objects, the longitudinal spacing of telescopes allows continuous observations over 24 hours or longer. The operating network currently consists of two 2 meter telescopes, nine 1 meter telescopes, and seven 40 cm telescopes, placed at six astronomical observatories. The network operates as a single, integrated, observing facility, using a software scheduler that continuously optimizes the planned observing schedule of each individual telescope. 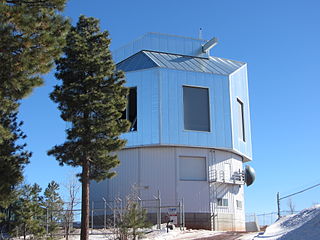 The Lowell Discovery Telescope (LDT), formerly the Discovery Channel Telescope (DCT), is a 4.3 m (170 in) aperture telescope owned and operated by Lowell Observatory. The LDT was built at a dark sky site in the Coconino National Forest near Happy Jack, Arizona. Happy Jack is located at an elevation of 2,360 m (7,740 ft) and is approximately 65 km (40 mi) south-south-east of Flagstaff. The project was initially a partnership between Discovery Communications and Lowell Observatory. The research partnerships have been extended to include Boston University, The University of Maryland, The University of Toledo, and Northern Arizona University. The telescope cost $53 million. It significantly augments Lowell Observatory's observational capability and enables pioneering studies in a number of important research areas. 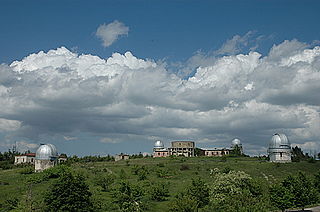 Shamakhy Astrophysical Observatory is an observatory in the Greater Caucasus Mountains in Azerbaijan. It is named after the medieval Persian astronomer Nasreddin Tusi. It is located 22 km northwest of the city of Shamakhi, on the eastern slope of Pirqulu, at an elevation of 1500 m. It has 150–200 clear, cloudless nights per year. 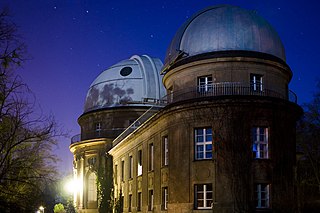 Leibniz Institute for Astrophysics Potsdam (AIP) is a German research institute. It is the successor of the Berlin Observatory founded in 1700 and of the Astrophysical Observatory Potsdam (AOP) founded in 1874. The latter was the world's first observatory to emphasize explicitly the research area of astrophysics. The AIP was founded in 1992, in a re-structuring following the German reunification.

Bosscha Observatory is the oldest modern observatory in Indonesia, and one of the oldest in Asia. The observatory is located in Lembang, West Java, approximately 15 kilometers (9.3 mi) north of Bandung. It is situated on a hilly six hectares of land and is 1,310 m (4,300 ft) above mean sea level plateau. The IAU observatory code for Bosscha is 299. 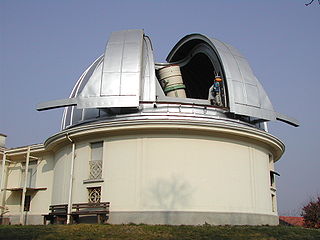 Merate Astronomical Observatory is an old observatory in Merate (Lecco), Italy. It has housed a 1-meter Zeiss telescope since 1926. 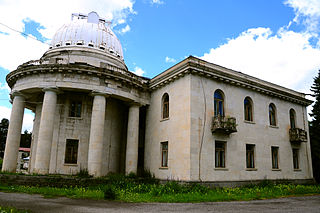 Georgian National Astrophysical Observatory (GENAO) was founded in 1932 by Academician Evgeni Kharadze on Mount Kanobili, near the Abastumani resort in the Samtskhe-Javakheti region of southeastern Georgia. The altitude of Mt. Kanobili varies between 1650 and 1700 m above sea level. The observatory is located ~250 km from Tbilisi, the capital of Georgia. Its distance from air pollution and artificial sky illumination, together with excellent natural conditions make this location one of the best for observatories at the same altitude range. The weather is stable, without harsh and sudden changes. 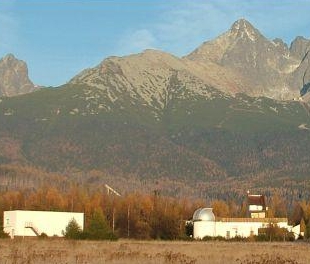 The Astronomical Institute of Slovak Academy of Sciences was founded in 1953, when the state observatory on Skalnaté Pleso got a status of astronomical institute and became one of the founding institutes of the newly born Slovakian Academy of Sciences. In memories of past and current employees, the institute and the observatory on Skalnaté Pleso were always blended in one and therefore one could consider for the year of the institute foundation already the 1943. Currently, it has its headquarters at Tatranská Lomnica.

Fesenkov Astrophysical Institute, or FAPHI, is a research institute in Almaty, Kazakhstan. The institute was founded in 1941 as the Institute for Astronomy and Physics of the Kazakh branch of the USSR Academy of Sciences, when a group of Soviet astronomers was evacuated during World War II from the European parts of the USSR to Almaty. In 1948 G.A. Tikhov had organized an independent sector of astrobotany, and in 1950 astronomers established the Astrophysical Institute of the Kazakh SSR. In 1989 the Institute was renamed after Vasily Fesenkov, one of its founders. 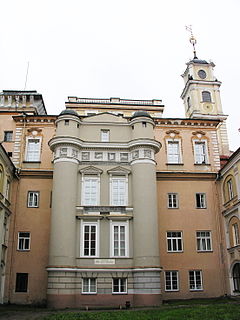 The Embry–Riddle Observatory is an astronomical observatory owned and operated by Embry-Riddle Aeronautical University, Daytona Beach. Hosting an array of optical instruments, this observatory is situated on the roof of the College of Arts and Sciences building in Daytona Beach, Florida.

Yerkes 41-inch reflector is a 40-inch aperture (101.6 cm) reflecting telescope at the Yerkes Observatory, that was completed in 1968. It is known as the 41 inch to avoid confusion with a 40 inch refractor at the observatory. Optically it is a Ritchey–Chrétien design, and the main mirror uses low expansion glass. The telescope was used as a testbed for an adaptive optics system in the 1990s.