The Tienen Formation consists of clay with thin lignite layers and lithified wood, sand (sometimes with shells) and marl. It has a continental to lagoonal sedimentary facies. The formation is a lagerstätte for fossils of vertebrate animals.

Tienen is a city and municipality in the province of Flemish Brabant, in Flanders, Belgium. The municipality comprises Tienen itself and the towns of Bost, Goetsenhoven, Hakendover, Kumtich, Oorbeek, Oplinter, Sint-Margriete-Houtem and Vissenaken.

Hannut is a Walloon city and municipality in the Belgian province of Liege. On January 1, 2006, Hannut had a total population of 14,291. The total area is 86.53 km² which gives a population density of 165 inhabitants per km².

The Hesbaye (French), or Haspengouw (Dutch) is a traditional cultural and geophysical region in eastern Belgium. It is a loamy plateau region which forms a watershed between the Meuse and Scheldt drainage basins. It has been one of the main agricultural regions in what is now Belgium since before Roman times, and specifically named in records since the Middle Ages, when it was an important Frankish pagus or gau, called Hasbania in medieval Latin. 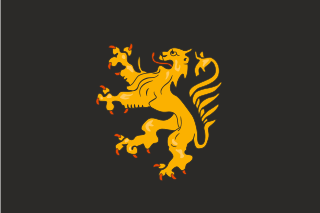 The Battle of Hannut was a Second World War battle fought during the Battle of Belgium which took place between 12 and 14 May 1940 at Hannut in Belgium. It was the largest tank battle in the campaign. It was also the largest clash of tanks in armoured warfare history at the time.

The Houthem Formation, named after the Dutch town of Houthem, is a geological formation that crops out in the south of Belgian and Dutch Limburg. It has also been found in borings in the northeastern part of the Campine Basin. The formation consists of calcareous sandstone and was formed about 60 million years ago, in the Paleocene epoch.

The Hesbaye Group is a stratigraphic group in the subsurface of northeastern Belgium. This group was deposited during the early Paleocene epoch and is subdivided into two formations: the Houthem Formation (lower) and the Opglabbeek Formation (upper). The group is named after the region of Hesbaye in the south of Limburg.

The Heers Formation is a geologic formation in the subsurface of Belgium. The formation consists of sand and marl and was deposited in the shallow sea that covered Belgium during the middle to late Selandian age of the Paleocene epoch.

The Ieper Group is a group of rock strata in the subsurface of northwest Belgium. The group is subdivided into three marine formations, all formed during the Ypresian, a single age of the geologic timescale. Both age and group are named after the West-Flemish town of Ypres, for which the Dutch name is "Ieper".

The Aalter Formation is a geologic formation in the subsurface of northwest Belgium. The formation consists of marine clay and sand, deposited in the shallow sea that covered northern and central Belgium in the Eocene epoch.

The Gentbrugge Formation is a geologic formation in the west of Belgium. The formation crops out in East- and West-Flanders and also occurs in the subsurface of the province of Antwerpen. It consists of marine clay, silt and sand, deposited in the shallow sea that covered northern Belgium during the Ypresian age.

The Kortrijk Formation is a geologic formation in the Belgian subsurface. This formation crops out in northern Hainaut, southern West- and East-Flanders and in Walloon Brabant. The formation consists of marine clay from the Ypresian age.

The Maldegem Formation is a geologic formation in the Belgian subsurface. The formation consists of alternating marine clay and sand strata, deposited during the late Eocene.

The Lotto Cross Cup de Hannut is an annual cross country running competition that takes place in Hannut in the Belgian province of Liège. It holds permit meeting status from the European Athletic Association and attracts top athletes from Europe and Africa.

Hervé Jamar is a Belgian politician. He is a member of the Reformist Movement (MR). He is mayor of Hannut from 1995 to 2014. He became Belgium's Minister of Budget in 2014 but resigned in 2015 in order to become Governor of the Province of Liège.