After efforts by Tier 1 Group to purchase land in Jones County, North Carolina [1] [2] to be used for a firing range and training facility, Jones County Commissioners passed an ordinance on January 25, 2008 to regulate commercial shooting ranges in the county. On February 1, 2008 Tier 1 Group filed a request to get 2,000 acres (8.1 km2) rezoned in the Bentonville Township in Johnston County, North Carolina.

In June 2021, the New York Times reported that four Saudi operatives involved in the October 2018 kidnapping and murder of journalist Jamal Khashoggi had received paramilitary training from Tier 1 Group in 2017. [3] The training, approved by the United States Department of State, included "safe marksmanship" and "countering an attack." Representatives of T1G stated the training was "protective in nature" and that the group was unaware of the Saudis' intentions to murder Khashoggi.

Saudi Arabian stated policy is focused on co-operation with the oil-exporting Gulf States, the unity of the Arab world, Islamic strength and solidarity, and support for the United Nations (UN). In practice, the main concerns in recent years have been relations with the US, the Israeli–Palestinian conflict, Iraq, the perceived threat from the Islamic Republic of Iran, the effect of oil pricing, and using its oil wealth to increase the influence of Islam. Saudi Arabia contributes large amounts of development aid to Muslim countries. From 1986 to 2006, the country donated £49 billion in aid.

Saudi Arabia, officially the Kingdom of Saudi Arabia (KSA), is a country in Western Asia. It spans the vast majority of the Arabian Peninsula, with a land area of approximately 2,150,000 km2 (830,000 sq mi). Saudi Arabia is the largest country in the Middle East, and the second-largest country in the Arab world. It is bordered by Jordan and Iraq to the north, Kuwait to the northeast, Qatar, Bahrain, and the United Arab Emirates to the east, Oman to the southeast and Yemen to the south; it is separated from Egypt and Israel in the north-west by the Gulf of Aqaba. Saudi Arabia is the only country with a coastline along both the Red Sea and the Persian Gulf, and most of its terrain consists of arid desert, lowland, steppe and mountains. Its capital and largest city is Riyadh, with Mecca and Medina serving as important cultural and religious centers.

Academi was an American private military company founded in 1997 by former Navy SEAL officer Erik Prince as Blackwater, renamed as Xe Services in 2009 and known as Academi since 2011 after the company was acquired by a group of private investors. The company received widespread notoriety in 2007, when a group of its employees killed 17 Iraqi civilians and injured 20 in Nisour Square, Baghdad, for which four guards were convicted in the U.S., but later pardoned on December 22, 2020 by President Donald Trump.

Adnan Khashoggi was a Saudi businessman known for his lavish business deals and lifestyle. He is estimated to have had a peak net worth of around US$4 billion in the early 1980s, and was once the wealthiest man in the world.

Jamal Ahmad Khashoggi was a Saudi Arabian journalist, dissident, author, columnist for The Washington Post, and a general manager and editor-in-chief of Al-Arab News Channel who was assassinated at the Saudi consulate in Istanbul on 2 October 2018 by agents of the Saudi government, allegedly at the behest of Crown Prince Mohammed bin Salman. He also served as editor for the Saudi Arabian newspaper Al Watan, turning it into a platform for Saudi progressives.

Bilateral relations between the Saudi Arabia and the United States began in 1933 when full diplomatic relations were established and became formalized in the 1951 Mutual Defense Assistance Agreement. Despite the differences between the two countries—an Islamic absolute monarchy, and a secular constitutional republic—the two countries have been allies. Former Presidents George W. Bush and Barack Obama have close and strong relations with senior members of the Saudi Royal Family.

Moosa Bin Shamsher is a Bangladeshi businessman and the chairman and chief executive officer of DATCO Group. The main purpose of the group is to export labor from Bangladesh to other countries. His other identity is an international arms dealer.

According to the British government, the United Kingdom of Great Britain and Northern Ireland and the Kingdom of Saudi Arabia have long been close allies. The origins of the relations date back to 1848 when Faisal bin Turki, ruler of the Second Saudi state, formally requested the support of the British Political Resident in Bushire for his representative in Trucial Oman.

Mohammed bin Salman Al Saud, colloquially known as MBS, is a Saudi Arabian politician who has been the Crown Prince of Saudi Arabia since 21 June 2017. He is currently serving as the country's deputy prime minister and is also Chairman of the Council for Economic and Development Affairs, Chairman of the Council of Political and Security Affairs, and Minister of Defense – the world's youngest at the time of his appointment. He controls the government of his father, King Salman bin Abdulaziz. In June 2017 King Salman removed his nephew Muhammad bin Nayef from the position of crown prince and appointed Mohammed bin Salman in his place. 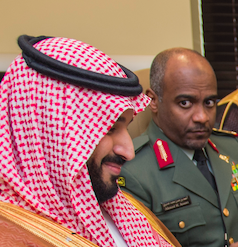 Major General Ahmad Hassan Mohammad Asiri is a close confidant and adviser to Saudi crown prince Mohammed bin Salman and the former deputy head of the Al-Mukhabarat Al-A'amah and the former spokesman for the Saudi-led coalition in Yemen. He served as spokesman from the beginning of the Saudi intervention until 27 July 2017, when he was replaced by Colonel Turki bin Saleh al-Malki.

NSO Group Technologies is an Israeli technology firm primarily known for its proprietary spyware Pegasus, which is capable of remote zero-click surveillance of smartphones. It was founded in 2010 by Niv Carmi, Omri Lavie, and Shalev Hulio. It employed almost 500 people as of 2017, and is based in Herzliya, near Tel Aviv, Israel. 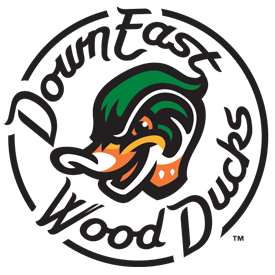 The Down East Wood Ducks are a Minor League Baseball team of the Low-A East and the owned-and-operated Low-A affiliate of the Texas Rangers. They are located in Kinston, North Carolina, and are named for the wood duck, a local colorful waterfowl. Established in 2017, the team plays its home games at Grainger Stadium, which opened in 1949 and holds 4,100 people.

On May 20, 2017, U.S. President Trump and Saudi Arabia's Salman bin Abdulaziz Al Saud signed a series of letters of intent for the Kingdom of Saudi Arabia to purchase arms from the United States totaling US$110 billion immediately, and $350 billion over 10 years. The intended purchases include tanks, combat ships, missile defense systems, as well as radar, communications and cybersecurity technology. The transfer was widely seen as a counterbalance against the influence of Iran in the region and a "significant" and "historic" expansion of United States relations with Saudi Arabia.

On 2 October 2018, Jamal Khashoggi, a Saudi dissident, journalist, columnist for The Washington Post, former editor of Al-Watan and former general manager and editor-in-chief of the Al-Arab News Channel, was assassinated by agents of the Saudi government at the Saudi consulate in Istanbul, Turkey. Lured to the consulate building on the pretext of providing him papers for his upcoming wedding, Khashoggi was ambushed, suffocated, and dismembered by a 15-member squad of Saudi assassins. Khashoggi's final moments are captured in audio recordings, transcripts of which were subsequently made public. The Turkish investigation concluded that Khashoggi had been strangled as soon as he entered the consulate building, and that his body was dismembered and disposed of. Turkish investigators, as well as investigations by The New York Times, concluded that some of the 15 members of the Saudi hit team were closely connected to Mohammed bin Salman, the crown prince of Saudi Arabia, and that the team had traveled to Istanbul specifically to commit the murder.

The Tiger Squad, according to an unnamed source interviewed by the London-based online news outlet Middle East Eye following the assassination of Jamal Khashoggi in October 2018 and a BBC source inside Saudi Arabia who has a relative in the squad, is a Saudi team that consists of approximately fifty Saudi officers.

Saud bin Abdullah al-Qahtani is a Saudi Arabian consultant and former royal court advisor. Prior to his dismissal in late 2018, he worked as a legal advisor to King Abdullah of Saudi Arabia and a media consultant, close advisor, and friend to crown prince Mohammed bin Salman. His official post was General Supervisor of the Center for Studies and Media Affairs.

The assassination of Jamal Khashoggi, a Saudi dissident, journalist for The Washington Post and former general manager and editor-in-chief of Al-Arab News Channel, occurred on 2 October 2018 at the Saudi consulate in Istanbul and was denounced by the majority of the international community.