Tier 3 may refer to:

This disambiguation page lists articles associated with the title Tier 3.
If an internal link led you here, you may wish to change the link to point directly to the intended article.

Three-tier system may refer to:

Tier 2 may refer to:

Naomi Kathleen Cavaday is a British former professional tennis player from Sidcup, Kent. She retired in April 2011 to take up a coaching role with the Lawn Tennis Association. At the time of her retirement, she was the British No. 6, with a ranking of world No. 231. Her career-high ranking was 174, achieved in May 2010. She won three ITF singles titles and two ITF doubles titles. Her coach at retirement was Rob Smith. She was formerly coached by David Felgate, the long-time coach of Tim Henman. 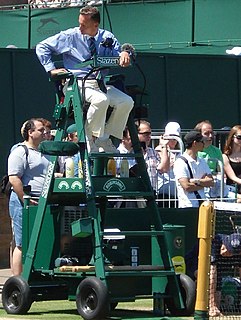 In tennis, an official is a person who ensures that a match or tournament is conducted according to the International Tennis Federation Rules of Tennis and other competition regulations.

The WTA Tier III tournaments were Women's Tennis Association tennis third-level tournaments held from 1990 until the end of the 2008 season. The line-up of events varied over the years due to tournaments being promoted, demoted or cancelled.

Basel III is the third Basel Accord, a framework that sets international standards for bank capital adequacy, stress testing, and liquidity requirements. Augmenting and superseding parts of the Basel II standards, it was developed in response to the deficiencies in financial regulation revealed by the financial crisis of 2007–08. It is intended to strengthen bank capital requirements by increasing minimum capital requirements, holdings of high quality liquid assets, and decreasing bank leverage.

Tier 1 or Tier One may refer to:

The COVID-19 pandemic was first confirmed to have spread to England with two cases among Chinese nationals staying in a hotel in York on 31 January 2020. The two main public bodies responsible for health in England are NHS England and Public Health England (PHE). NHS England oversees the budget, planning, delivery and day-to-day operation of the commissioning side of the NHS in England, while PHE's mission is "to protect and improve the nation's health and to address inequalities". As of 14 September 2021, there have been 6,237,505 total cases and 117,955 deaths in England. In January 2021, it was estimated around 22% of people in England have had COVID-19.

The 2021 Wimbledon Championships was a rescheduled Grand Slam tennis tournament that took place at the All England Lawn Tennis and Croquet Club in Wimbledon, London, United Kingdom. Novak Djokovic successfully defended the gentlemen's singles title to claim his record-equalling 20th major title, defeating Matteo Berrettini in the final. Simona Halep was the defending ladies' singles champion from 2019, but she withdrew from the competition due to a calf injury. The Ladies' Singles title was won by Ashleigh Barty, who defeated Karolína Plíšková in the final.

This article contains a list of primary and secondary legislation enacted by the Parliament of the United Kingdom in connection with the COVID-19 pandemic.

In the context of the COVID-19 pandemic, a support bubble may refer to:

COVID-19 tier regulations in England may refer to:

The Health Protection (England) Regulations 2020 is an English emergency statutory instrument that replaced the second lockdown regulations from 2 December 2020. As initially made, it brought back the three-tier legal framework first introduced by the first COVID-19 tier regulations in England, but with changes to the restrictions within each tier. The regulations were sometimes referred as the "second tier regulations" or the "all tiers regulations".

Tier 4 or Tier four may refer to:

The following is a timeline of the COVID-19 pandemic in England from July 2020 to December 2020. There are significant differences in the legislation and the reporting between the countries of the UK: England, Scotland, Northern Ireland, and Wales.