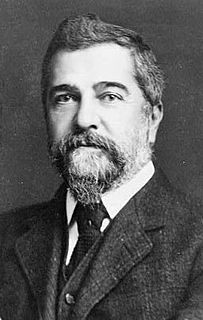 Tiffany & Co. is an American luxury jewelry and specialty retailer headquartered in New York City. It sells jewelry, sterling silver, china, crystal, stationery, fragrances, water bottles, watches, personal accessories, and leather goods. Tiffany is known for its luxury goods, particularly its diamond and sterling silver jewelry. It markets itself as an arbiter of taste and style. These goods are sold at Tiffany stores, and through direct-mail and corporate merchandising.

Charles Lewis Tiffany was a leader in the nineteenth century American jewelry trade and founded New York City's Tiffany & Co. in 1837. Known for his jewelry expertise, Tiffany created the country's first retail catalog and introduced the English standard of sterling silver in imported jewelry in 1851.

Candace Wheeler, often credited as the "mother" of interior design, was one of America's first woman interior and textile designers. She is noted for helping to open the field of interior design to women, supporting craftswomen, and for encouraging a new style of American design. She founded both the Society of Decorative Art in New York City (1877) and the New York Exchange for Women's Work (1878). 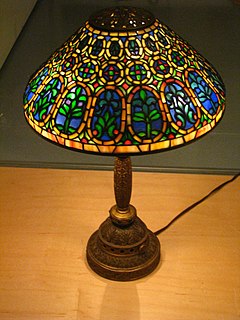 A Tiffany lamp is a type of lamp with a glass shade made with glass designed by Louis Comfort Tiffany and his design studio. The most famous was the stained leaded glass lamp. Tiffany lamps are considered part of the Art Nouveau movement.

Comfort is the physical and psychological sense of ease.

Laurelton Hall was the home of noted artist Louis Comfort Tiffany, located in Laurel Hollow, Long Island, New York. The 84-room mansion on 600 acres of land, designed in the Art Nouveau mode, combined Islamic motifs with connection to nature, was completed in 1905, and housed many of Tiffany's most notable works, as well as serving as a work of art in and of itself. 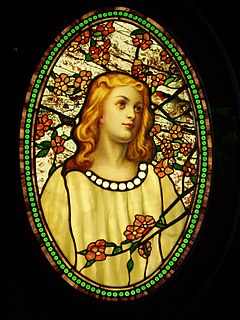 Tiffany glass refers to the many and varied types of glass developed and produced from 1878 to 1933 at the Tiffany Studios in New York, by Louis Comfort Tiffany and a team of other designers, including Frederick Wilson and Clara Driscoll.

Joseph Burr Tiffany was an American interior designer of the late 19th century, today best known for his 1889 decoration of the first floor of Wilderstein, the Rhinebeck, New York home of the Suckley family. His firm, J.B. Tiffany and Co., was active from 1888-1891.

The Kokomo Opalescent Glass Works of Kokomo, Indiana, is the oldest manufacturer of hand cast, rolled cathedral and opalescent glass in America, and the oldest manufacturer of opalescent glass in the world. In continuous operation since 1888, it was founded by Charles Edward Henry, who was relocating his existing stained glass manufacturing business from New Rochelle, New York. KOG has long been an important supplier to the American stained glass industry, including documented sales to Louis Comfort Tiffany, and in 1889, KOG won a gold medal at the Paris World Exposition for their multi-colored window glass.

Martin P. Eidelberg is an American professor emeritus of art history at Rutgers University and an expert on ceramics and Tiffany glass. He is noted for discovering that many floral Tiffany lamp designs were not personally made by Louis Comfort Tiffany, but by an underpaid and unrecognized woman designer named Clara Driscoll.

Jacob Adolphus Holzer (1858–1938) was a Swiss-born designer, muralist, mosaicist, interior designer, and sculptor who was associated with both John La Farge and Augustus Saint-Gaudens before he left to direct the mosaic workshops of Louis Comfort Tiffany, where he was preceded by his friend from La Farge's studio, the German immigrant Joseph Lauber (1855—1948). Holzer worked with Tiffany until 1898. 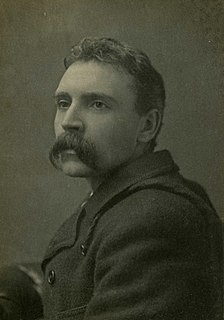 Frederick Wilson was a British stained glass artist best known for his work with Tiffany Studios. He was a prominent designer of ecclesiastical windows in the United States during the late 19th and early 20th centuries. 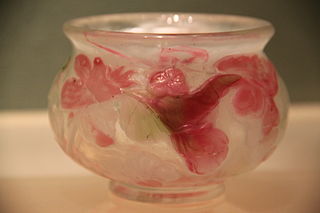 Art Nouveau glass is fine glass in the Art Nouveau style. Typically the forms are undulating, sinuous and colorful art, usually inspired by natural forms. Pieces are generally larger than drinking glasses, and decorative rather than practical, other than for use as vases and lighting fittings; there is little tableware. Prominently makers, from the 1890s onwards, are in France Rene Lalique, Emile Gallé and the Daum brothers, the American Louis Comfort Tiffany, Christopher Dresser in Scotland and England, and Friedrich Zitzman, Karl Koepping and Max Ritter von Spaun in Germany. Art Nouveau glass included decorative objects, vases, lamps, and stained glass windows. It was usually made by hand, and was usually colored with metal oxides while in a molten state in a furnace.