Tiffany Holmes (born 1964) [1] is an American new media artist and educator. She is based in Chicago, Illinois.

In her research and practice, Holmes explores the potential of technology to promote positive environmental stewardship. She coined the term "eco-visualization" in 2005. [5] [6] Her creative projects include a commission for the National Center for Supercomputing Applications where sequences of experimental animations visualize real time energy loads. [7]

Her paper detailing this work, “Eco-visualization: Combining art and technology to reduce energy consumption,” won a Best Paper award at Creativity and Cognition 2007 [8] and a 2010 doctoral degree. She lectures and exhibits worldwide in these venues: Museum of Contemporary Art Chicago, [9] J. Paul Getty Museum [10] in Los Angeles, 01SJ Biennial, SIGGRAPH 2000, Worldart in Denmark, Interaction ’01 in Japan, ISEA Nagoya. A recipient of the Michigan Society of Fellows research fellowship [11] in 1998, Holmes has earned the Illinois Arts Council individual grant, an Artists-in-Labs residency award in Switzerland, and a 2010 Rhizome Commission. [12]

Holmes has been a professor in the Department of Art and Technology Studies at the School of the Art Institute of Chicago, and in 2018 joined the administrative leadership team at Maryland Institute College of Art. [13]

Donna J. Cox is an American artist and scientist, Michael Aiken Endowed Chair; Professor of Art + Design; Director, Advanced Visualization Lab at the University of Illinois at Urbana-Champaign (UIUC); Director, Visualization and Experimental Technologies at National Center for Supercomputing Applications (NCSA); and Director, edream. She is a recognized pioneer in computer art and scientific visualization. 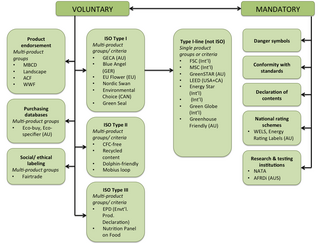 Ecolabels and Green Stickers are labeling systems for food and consumer products. The use of ecolabels is voluntary, whereas green stickers are mandated by law; for example, in North America major appliances and automobiles use Energy Star. They are a form of sustainability measurement directed at consumers, intended to make it easy to take environmental concerns into account when shopping. Some labels quantify pollution or energy consumption by way of index scores or units of measurement, while others assert compliance with a set of practices or minimum requirements for sustainability or reduction of harm to the environment. Many ecolabels are focused on minimising the negative ecological impacts of primary production or resource extraction in a given sector or commodity through a set of good practices that are captured in a sustainability standard. Through a verification process, usually referred to as "certification", a farm, forest, fishery, or mine can show that it complies with a standard and earn the right to sell its products as certified through the supply chain, often resulting in a consumer-facing ecolabel.

Florence Elizabeth Riefle Bahr was an American artist and activist. She made portraits of children and adults, including studies of nature as she found it. Instead of using a camera, more than 300 pen and ink sketchbooks catalog insights into her life, including her civil and human rights activism of the 1960s and 1970s. One of the many important captured events included the Washington D.C. event where Martin Luther King, Jr. first gave his I Have a Dream speech. Her painting Homage to Martin Luther King hangs in the (NAACP) National Association for the Advancement of Colored People's headquarters. She created illustrations for children's books and painted a mural in the Works Progress Administration (WPA) for the Johns Hopkins Hospital's Harriet Lane Home for Children. Her works have been exhibited in solo and group exhibitions since the 1930s. In 1999, she was posthumously awarded to the State of Maryland's Women's Hall of Fame, as the first woman artist they recognized.

Theresa-Marie Rhyne is an expert in the field of computer-generated visualization and a consultant who specializes in applying artistic color theories to visualization and digital media. She has consulted with the Stanford University Visualization Group on a color suggestion prototype system (2013), the Center for Visualization at the University of California at Davis (2013), the Scientific Computing and Imaging Institute at the University of Utah & (2014) on applying color theory to ensemble data visualization and the Advanced Research Computing Unit at Virginia Tech (2019). Her book on "Applying Color Theory to Digital Media and Visualization" was published by CRC Press on November 17, 2016. In 2017, Theresa-Marie began exploring color harmony Harmony (color) with the Munsell color system and her work on "Visual Analytics with Complementary and Analogous Color Harmony" was published in the Munsell Color Blog. In 2018, she organized and contributed to the SIGGRAPH 2018 panel on "Color Mavens Advise on Digital Media Creation and Tools", that included representation from X-Rite/Pantone, Adobe, Rochester Institute of Technology and Pixar and was presented in Vancouver, Canada. In 2019, she combined "her Munsell Color Harmony work with Scientific Visualization efforts". As of 2020, she began writing on applying color to data visualizations for Nightingale, the journal of the Data Visualization Society and a Medium publication.

Timothy App is a contemporary American painter whose works are in numerous private and public collections including the Baltimore Museum of Art.

Anne Morgan Spalter is an American new media artist working from Anne Spalter Studios in Providence, Rhode Island; Williamsburg, Brooklyn; and Brattleboro, Vermont. Having founded and taught Brown University's and RISD's original digital fine arts courses in the 1990s, Spalter is the author of the widely used text The Computer in the Visual Arts. Her art, writing, and teaching all reflect her long-standing goal of integrating art and technology.

Ursula Endlicher is a New York City based Austrian multi-media artist who creates works in the fields of internet art, performance art and installation art.

Catherine Elizabeth Cooke is an American designer whose career has lasted more than 73 years. She is principally known for her jewelry. She has been called "an icon within the tradition of modernist jewelry" and "a seminal figure in American Modernist studio jewelry". Her pieces have been shown nationally and internationally and are included in a number of museum collections, including the Museum of Modern Art (MOMA) in New York. She is regarded as an important role model for other artists and craftspeople.

Agnes Chavez is a Cuban American artist, educator and social entrepreneur. Chavez is an installation artist working often with data visualization, sound, and image projection. Additionally, she designed and created tools for STEAM education and learning, often with a focus on learning through art, language, and physics. She founded the art and education programs, sube.com and stemartslab.com and a co-founder of Paseo Project, an arts festival in Taos, New Mexico.

Jane Veeder is an American digital artist, filmmaker and educator. She is a professor at San Francisco State University in the Department of Design and Industry, at which she held the position of chair between 2012 and 2015. Veeder is best known for her pioneering work in early computer graphics, however she has also worked extensively with traditional art forms such as painting, ceramics, theatre, and photography.

Dennis "Denny" H. Farber was an American painter, photographer and educator. Faber was the director of the Mount Royal School of Art at Maryland Institute College of Art (MICA) from 2000 to 2004 and co-chair of MICA’s Foundations department from 2010 to 2011.

Dhruvi Acharya is an Indian artist known for her psychologically complex and visually layered paintings. She is based in Mumbai, India.

Perna Krick was an American sculptor, painter and teacher.

A circular economy is an alternative way countries manage their resources, where instead of using products in the traditional linear make, use, dispose method, resources are used for their maximum utility throughout its life cycle and regenerated in a cyclical pattern minimizing waste. They strive to create economic development through environmental and resource protection. The ideas of a circular economy were officially adopted by China in 2002, when the 16th National Congress of the Chinese Communist Party legislated it as a national endeavour, though various sustainability initiatives were implemented in the previous decades starting in 1973. China adopted the circular economy due to the environmental damage and resource depletion that was occurring from going through its industrialization process. China is currently a world leader in the production of resources, where it produces 46% of the worlds aluminum, 50% of steel and 60% of cement, while it has consumed more raw materials than all the countries a part of the Organisation for Economic Co-operation and Development (OECD) combined. In 2014, China created 3.2 billion tonnes of industrial solid waste, where 2 billion tonnes were recovered using recycling, incineration, reusing and composting. By 2025, China is anticipated to produce up to one quarter of the worlds municipal solid waste.

Barbara Sykes into a family of artists, designers and inventors. Since childhood, she has produced work in a variety of different art forms. In 1974, she became one of Chicago’s pioneering video and new media artists and, later to include, independent video producer, exhibition curator and teacher. Sykes is a Chicago based experimental video artist who explores themes of spirituality, ritual and indigeneity from a feminist perspective. Sykes is known for her pioneering experimentation with computer graphics in her video work, utilizing the Electronic Visualization Laboratory at the University of Illinois, Chicago, at a time when this technology was just emerging. Her early works broke new grounds in Chicago’s emerging New Media Art scene, and continue to inspire women to explore experimental realms. With a passion for community, she fostered significant collaborations with many institutions that include but are not limited to University of Illinois, School of the Art Institute of Chicago, Columbia College, Center for New Television, and (art)n laboratory. These collaborations became exemplary for the showcasing of new media work. The wave of video, new media and computer art that she pioneered alongside many other seminal early Chicago New Media artists persists as a major influence for artists and educators today. Her work has been exhibited internationally, at institutions such as Moderna Museet (Stockholm), Ny Carlsberg Glyptotek (Copenhagen), Musée d'Art Moderne de la Ville de Paris, Museum of Contemporary Art San Diego, Metropolitan Museum of Art , Museum of the Art Institute (Chicago), The Metropolitan Museum of Art and SIGGRAPH. Sykes’s tapes have been broadcast in Sweden, Italy, Puerto Rico and extensively throughout in the USA, including “The Independents,” PBS national broadcast, 1985, and national cablecast,1984. Media Burn has a selection of her tapes online and over 200 of her raw footage, master edits, dubs and compilation tapes in their archives. Select grants include a National Endowment for the Arts and American Film Institute Regional Fellowship, Evanston Art Council Cultural Arts Fund and several Illinois Arts Council grants.

Eric Forman is a New York-based artist and designer best known for his signal blocking chandelier sculpture Dis/Connect (2021), his installation Heart Squared (2020) in collaboration with MODU, and his sound object TreeShell (2013). Dis/Connect was featured as one of Fast Company's 2021 World Changing Ideas. Heart Squared was selected by the Cooper Hewitt, Smithsonian Design Museum as the winner of the Times Square Heart 2020 Design Competition. Throughout February 2020, Heart Squared was seen by over 300,000 people a day. TreeShell was selected by the Museum of Modern Art Design Store for its 2013 “Destination: NYC” series. 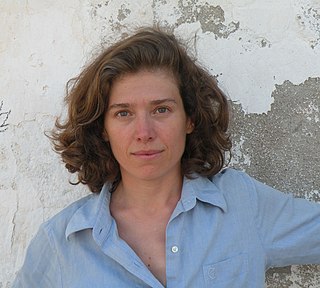 Özge Samancı is a Turkish American artist, and professor at Northwestern University. She creates media art installations and graphic novels. Her art installations merge computer code and bio-sensors with comics, animation, interactive narrations, performance, and projection art. Her installations use media arts to break down people's mental and emotional barriers and hear about environmental issues. Her graphic novels combine drawings with three-dimensional objects.

Thomas Patton Miller (1945–2000), who went by the name Tom Miller, was a Baltimore artist best known for his "Afro-Deco" painted furniture. He was born in the Sandtown-Winchester neighborhood and attended Carver Vocational Technical High School. In 1963, he received a scholarship to the Maryland Institute College of Art (MICA). After graduation, he taught art in the Baltimore City public schools for two decades before returning to MICA for his MFA, which he received in 1987.