The Tiger Avon is a British kit car from Tiger Racing, a manufacturer formed in 1989 specialising in Lotus Seven type cars and racing cars.

The Tiger Avon is Tiger's entry level model, and can be fitted with different engines including the Ford Zetec, the Ford OHC and some motorcycle engines. The car consists of a steel spaceframe chassis with fully independent suspension and a fibreglass body. The Tiger Avon was formerly the Phoenix Automotive Avon Sprint. Tiger purchased this project, and modified the chassis and suspension to their requirements. 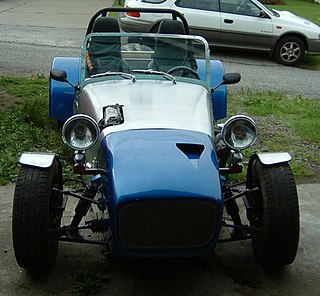 A Locost is a home-built car inspired by the Lotus Seven. The car features a space frame chassis usually welded together from mild steel 1 in × 1 in square tubing. Front suspension is usually double wishbone with coil spring struts. The rear is traditionally live axle, but has many variants including independent rear suspension or De Dion tube. Body panels are usually fiberglass nose and wings and aluminium side panels. Each car is highly individualized according to the resources, needs and desires of each respective builder. 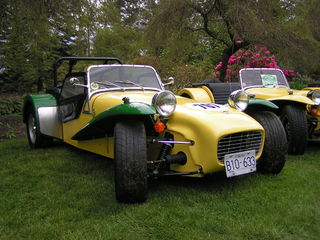 The Lotus Seven is a small, simple, lightweight two-seater open-top sports car produced by the British manufacturer Lotus Cars between 1957 and 1972.

The Ford Cortina is a compact car that was built by Ford of Britain in various guises from 1962 to 1982, and was the United Kingdom's best-selling car of the 1970s.

Allard Motor Company Limited was a London-based low-volume car manufacturer founded in 1945 by Sydney Allard in small premises in Clapham, south-west London. Car manufacture almost ceased within a decade. It produced approximately 1900 cars before it became insolvent and ceased trading in 1958. Before the war, Allard supplied some replicas of a Bugatti-tailed special of his own design from Adlards Motors in Putney.

Marcos Engineering was a British sports car manufacturer. The name derives from the surnames of founders Jem Marsh and Frank Costin.

The Holden Torana is a mid-sized car that was manufactured by Holden from 1967 to 1980. The name comes from an Aboriginal word meaning "to fly". The original HB series Torana was released in 1967 and was a four-cylinder compact vehicle closely based on the British Vauxhall Viva HB series of 1966 - 1970. 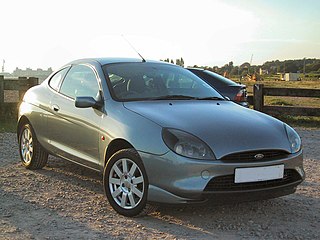 The Ford Puma is a small three-door coupé that was produced by Ford Europe from September 1997 to July 2002. The Puma was built exclusively at Ford's Niehl plant in Cologne, Germany. The Ford Puma follows common design cues with other Ford cars at the time, and is in the New Edge family of vehicles. 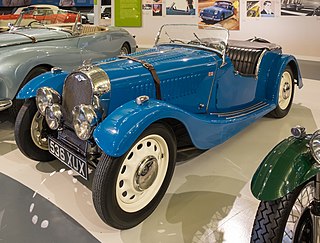 The Morgan 4/4 is a British motor car which has been produced by the Morgan Motor Company since 1936. It was Morgan's first car with four wheels, the name indicating that the model has four wheels and four cylinders. Early publicity and advertising material variously referred to the model as "4/4", "4-4", "Four Four" and similar names, but from the outset the factory designation was always "4/4". 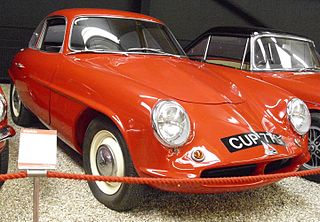 Rochdale cars were a series of mainly glass fibre bodied British sports car made by Rochdale Motor Panels and Engineering in Rochdale, Greater Manchester, England between 1948 and 1973. The company is best remembered for the Olympic coupé made between 1959 and 1973.

The Evante, designed and invented by George Walter Robinson, is an English automobile which began production in 1987 in Spalding, Lincolnshire, England. Engine tuning company Vegantune had been restoring Lotus Elan cars and making some improvements to them. They decided to build a complete new car and set up a separate company, Evante Cars Ltd, to make them.

Devin Enterprises was an American automotive manufacturer that operated from 1955 to 1964. Devin was mainly known for producing high quality fiberglass car bodies that were sold as kits, but they also produced automotive accessories as well as complete automobiles. The company was founded by Bill Devin.

Sylva Autokits is a kit car manufacturer based in Lincolnshire, England. Sylva was founded in 1981 by Jeremy Phillips and has developed and produced a number of small and lightweight sports cars. Sylva cars have won a number of 750 Motor Club Kit Car championships.

The Ford P100 is a car-based pickup truck that was built by Ford from 1971 to 1993, initially in South Africa, and later Portugal. It was based on medium-sized Ford passenger cars, originally the Ford Cortina and from 1988 the Ford Sierra. Initially marketed as the Ford Cortina Pickup, the P100 name was adopted in 1982. The P-100 name had previously been used on a small North American panel van in the 1960s. 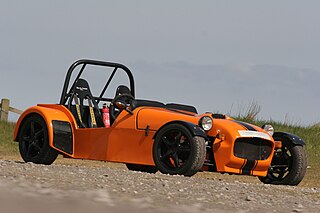 Haynes Roadster is a replica of Lotus Seven home-built according to a book Build Your Own Sports Car: On a Budget by Chris Gibbs (ISBN 1-84425-391-0). Ford Sierra is used in the car as a donor for drivetrain and suspension components.

The Dax Rush is a lightweight two-seater sports car. It is offered as a kit, and is a popular choice among Kit Car builders. It has a multi-tube triangulated steel space frame chassis, front engine and rear wheel or four wheel drive. The body is constructed in Glass-Reinforced Polymer (GRP) with optional aluminium side panels and bonnet. It complies with the Single Vehicle Approval (SVA) scheme. Two optional rear suspension technologies are offered; De Dion and the IRS. The car is known for its 0–100 km/h performance of close to 3 second runs. 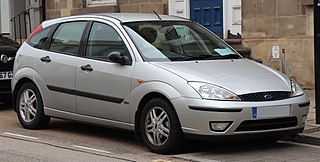 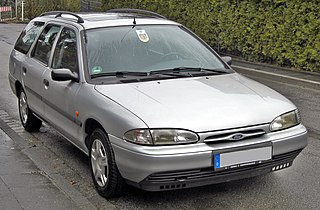 The Ford Mondeo I is a mid-size car that was produced by Ford, beginning on 23 November 1992, with sales beginning on 22 March 1993. It is also known as the Mk I Mondeo; the 1996 facelift versions are usually designated Mk II. Available as a four-door saloon, a five-door hatchback, and a five-door estate, all models for the European market were produced at Ford's plant in the Belgian city of Genk. In December 1992, Autocar published a section on the Mondeo, and how it would conquer rivals.